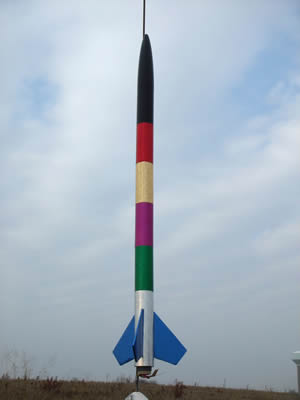 Brief:
Odd'l Rockets is a company recently started by Chris Michielsen, specializing in somewhat unusual designs and specialty gear generally not found elsewhere. I had looked over their line when Jonrocket.com first started carrying them and had planned on adding a few goodies to my Christmas wish list, but was pleasantly surprised when a small care package arrived of Odd'l goodies to review.

The Break-Away kit is an ordinary looking 3-fin design, at least until recovery time. It's intended to break into several pieces and tumble safely down, much like the Estes Wacky Wiggler, though this design features good old fashioned kraft tubes and balsa throughout.

Construction:
My first impression when looking at the kit and components was that this could pass for a Semroc kit--similar artwork, sealed up in a plastic bag, excellent quality parts. The fins were laser cut, tubes had nice crisp and straight edges, everything top notch. Parts include:

The instructions on this are fairly good, again reminiscent of Semroc, with about 20 steps printed across 3 folded 8.5x11 pages, with check boxes as you go. Most steps feature computer drawings. This could probably be classified as a skill level 1 kit, though I'd rate it a 2 for now as some of the steps are a bit confusing and previous experience helps get through them.

The body tube construction is where you need to start paying attention to the directions. There are (6) total body tubes and 5 couplers. The couplers are to go in what will be the forward end of the longer body tube and all but one of the short tubes. The coupler-less tube winds up being the one the nose cone will go into, just not yet. Normally couplers are inserted about halfway into the tube, but in this case they only go in 1/4" deep, so be very careful to make sure they're straight and aligned, since they can wobble a bit only being in so far.

The next stage is where I think the directions got a little hinky on me. There are (5) clear plastic lug-like pieces, which wind up being used to anchor the Kevlar into each piece individually. The instructions initially say they will be glued into each of the couplers. OK, 5 pieces, 5 couplers, I can handle that. The instructions then say "glue the last coupler in 5/8" in from one end of the nose cone tube (the one without the coupler)". Problem. 5 pieces can't glue into 6 tubes, so I either have to glue one into each coupler piece (one of which is the longer 4" aft body tube) or glue one into the nose tube and short one of the others. Gluing 5/8" back in the nose tube, though, won't allow the nose cone shoulder and one of those couplers hanging mostly out of the other tubes to both fit. 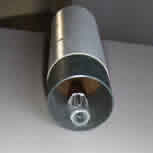 I made the executive decision to leave the plastic lug out of the aft 4" body tube, since the Kevlar was already anchored in there via the motor mount, CA'd the plastic lug-like pieces in each of the short body tube pieces including the coupler-less nose section, and trimmed about 3/8" off the nose cone shoulder so it would fit.

Next up was fin mounting, marked using a template pattern sheet.

The final construction step(s) involve threading the Kevlar cord through the lug-like pieces inside the body tubes, then tying knots around them to hold the body tube sections about 4" apart when tumbling. There's a very good illustration showing how the knot and placement work, so as long as you're careful to feed from the aft end of the tubes, everything is easy. Once everything's tied together, the nose cone is glued to the open front end of the coupler-less body tube.

After finishing everything up, I had the nagging feeling that there ought to be a screw eye attachment to the nose cone rather than counting on the plastic lug-like piece to hold its grip during ejection. I decided to go with the "stock" build, though, since this was for review purposes.

Finishing:
The cover art illustrates a neat hodge podge of colors, one for each of the individual tubes, and I decided to go along a similar route using various cans of Krylon that don't get much use in my typical sport rocket use. I started with two coats of gray primer, sanding between, then went for the various leftover colors in the scheme. That turned out to be a pretty bad idea. I've had some trouble with Krylon compatibility between old and new, but generally figured new would work OK over old primer, and old Krylon would certainly work over old primer. Not so--I had a crinkled mess. Rather than spend another week or so sanding and reworking it, I bailed and went with decal wraps of various colors I'd picked up from Aerospace Speciality Products. That wound up being quick, easy, and looked great. 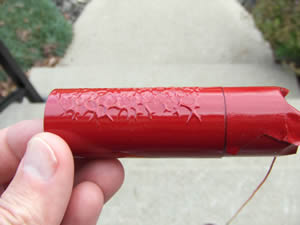 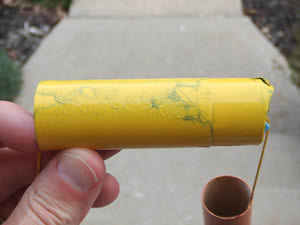 Flight:
For the first flight, I took advantage of a calm day and went for the max C6-5. It zipped fairly quickly and dead straight, though as it started to top 1000 feet I realized flying this on a C, with no tracking powder, was possibly a mistake. I could barely track the smoke trail from the delay against the overcast sky, and knew there would be no chute or streamer to pick up. I was just able to spot it as it broke apart at ejection.

Recovery:
The recovery is dirt simple--everything pops apart into individual pieces, tethered together by the Kevlar, tumbling safely down. Mine worked fine, though one coupler was a bit too tight (paint bled), so two sections remained together. I found the complete rocket in fine shape a grueling 75 foot walk away from the pad. 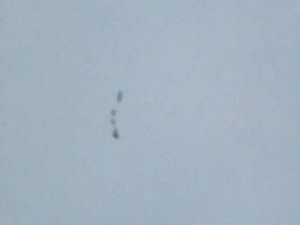 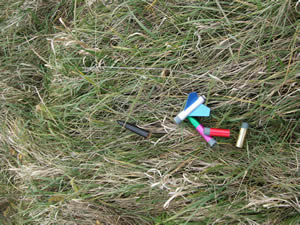 Summary:
While the design does tend to look like a basic 3FNC, the recovery method certainly makes this a bit unusual. Pros are the incredibly simple flight prep (no wadding or chute/streamer to prepare), good flyer, and quality components. The main con would be the confusing and poorly worded instructions, though after a few exchanges with Chris, it looks like they've been redone. I'll just chalk it up to the perils of being a guinea pig.

Thanks Chan for the great reviews! Sorry to see you had paint compatibility problems. Through emails, Chan did bring up two steps in the instructions that needed clarification. Those corrections have been made. The third Break-Away prototype is approaching 10 flights and still going strong!

Hi Chan,  Actually using the wraps was a good idea.  I had painted mine and it took a while with a lot of differnt paints, however it came out looking great...until I launched it and then almost every section recieved some paint damage from one section hitting another (I had even done extra clear coats to protect the paint!).  I'm currently repainting it, but if I were to build another one, I would think vinyl wraps would make a lot more sense and be easier.  You can get a pack of a variety of colors of vinyl adhesive backed sheets...30 sheets of 6x12" for about $13 on Amazon and these sheets have so many uses.  After I finish repainting the rocket, I may instead cover each section with clear packing tape since it's lighter.  Still an awesome rocket. :)  Regards, Ken