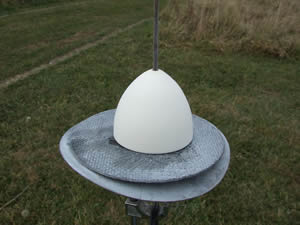 Brief:
When I first saw Oddl Rockets' blast deflector on jonrocket.com's site, I was intrigued, and had figured I'd try one the next time I needed to pick up a few more of the grinding disks combined with spent motor casings I've been using. I was pleasantly surprised, though, to find one packed in with the free Break-Away kit Chris had sent me in exchange for posting a review.

Construction:
Components include...a blast deflector. It's a single piece ceramic half-egg shape, 2-5/16" diameter and 2" tall. You still need to provide the launch pad, rod, and a conventional metal plate/blast deflector, grinding disk, etc. as a base.

There's nothing to construct, as it's ready to use. It does come with a single sheet of suggested use/configurations, including illustrations, which address a couple different styles of launch gear.

Finishing:
Nothing to finish--it's a plain white ceramic part, designed to get blasted. 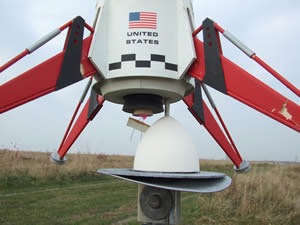 I took this out for a test spin, using it on top of my regular plate but instead of the standoff. Note that it only works with 1/8" rods due to the small hole in the top. I would think a slightly larger hole accommodating 3/16" would be preferable, as that could handle 1/8" as well.

The first model I launched was a Semroc Mars Lander, which meant the motor would be offset from the center of the deflector by about 1/2". The launch was fine, and I didn't see any significant difference in thrust. A post-flight review at the pad showed that the blast was mostly deflected, but a fair amount still hit the metal plate.

The second flight was a regular BT50-based model with 18mm motor, much closer to the center of the deflector. As the photo shows, this blast was almost entirely on the deflector, virtually nothing hitting the metal plate. 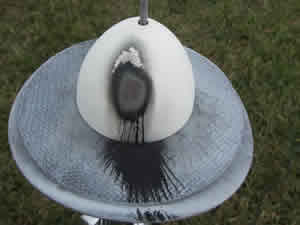 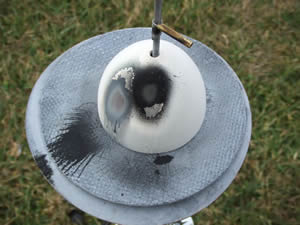 The third test was a bit more aggressive, going with a 3x18mm cluster of C6's. Much like the first flight, the motors offset more than about 1/4" wound up scorching the metal plate a bit.

Summary:
This is a nifty little piece of ground support that I'm definitely going to be keeping in my range box now. It does work nicely as a standoff, and has the added bonus of extending the life of the grinding disks I tend to burn through on a regular basis.

Of course, the 1/8" hole limits it flexibility, and the $10 price tag probably classifies it as a launch luxury more than a launch necessity. After all, it's extending the life of something I spend about $1-2 a year on (though would clearly be worth it to someone buying replacement Estes deflectors), and eliminating the standoff which I cheaply get for free (spent motor casings).

Overall, there's nothing like it out there that I know of, it does the job fairly well, and it's certainly worth consideration for anyone looking to upgrade or replace a portion of their launch gear.

Another advantage of the Blast is that it deflects the exhaust away from your rocket reducing the amount of soot on the back of your rocket.

I agree with the review and the added opinion. They work well, prevent shorts, and we are using them fine on both 1/8" and 3/16" rods.

The hole at the top of the Blast Dome Deflector can be easily widened for 3/16" rod with a small needle file. One feature that not mentioned in the review: The Ceramic Deflector is non-conductive. Micro clips won't short out if they rest on it. Using this deflector, the clips are raised above a standard (flat) metal deflector. There is less chance of an electrical short.

The Odd'l Rockets BLAST Deflector has been redesigned (May, 2015) with a wider base now 2 7/8" diameter.

This provides better deflection for body tube sizes up to a BT-70.

The new molds were made from an original MPC Ceramic Blast deflector.