Brief:
This kit is brought to you by the Peter Alway, the author of Rockets of the World. It not surprisingly packs in a lot of intricate scale details into a very affordable and flyable kit. See my comparison review for other Saturn V options. This one stacks up favorably in terms of price and detailing. It is approximately 1:195 scale of the mammoth Saturn V.

Construction:
The kit is produced by Balsa Machining Service featuring top quality tubes, cones, transitions and laser-cut components. There was no parts list in the kit and it would be a very long one if I put one together. I will, however, attempt to at least summarize the main elements: 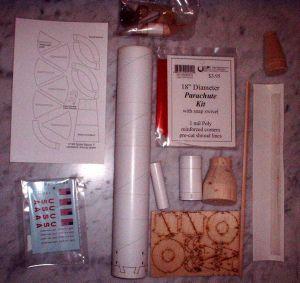 On a scale of 1-5, I would rate this kit at least a 3 and probably leaning towards a 4 on skill/complexity. It is definitely for the experienced builder and craftsman although the instructions are certainly well enough written and illustrated that a less skilled modeler can get by. This is such a wonderfully detailed kit though, that the builder owes the rocket gods and designer/producer a good effort.

The motor mount construction is a basic BT-20, pair of centering rings, a motor block, and metal hook. Nothing terribly tricky about it. 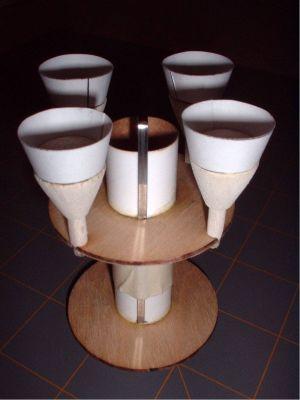 Mounted to the base of the motor mount are 4 nozzles. In the author's own words: "admire these parts--they are responsible for nearly a quarter of the cost of this kit". They are indeed nicely turned wood bases that fit snugly into holes on the aft motor mount centering ring. The nozzles are topped off with paper shrouds. Prior to mounting in the body tube, the lower portion of this (below the aft centering ring) gets painted silver.

One of the challenges of building a Saturn V is the fin/shroud assembly. Basically, the fins protrude out of a conic section shroud. For this kit, this assembly consists of a plywood back piece that mounts to the tube, a half-circle base, and a plywood fin. This forms the basic structure and a cardstock shroud is then cut and formed that goes over this like a skin. I found that everything lined up and fit very nicely.

The instructions then call for masking and painting the shroud assembly. Masking and painting a Saturn is the other serious pain. In the case of the shrouds, the lower portion is silver and the upper portion is black on the left side and white on the right side. This takes a lot of time and care to do. If I had a "do over" on this, I'd try to figure out a way to paint the shroud first, paint the fin separately, and then glue the painted shroud over the fin.

The body tube for this kit is just wild. No marking needed, as everything's covered via laser. There are etched alignment lines and laser cutouts. There are a number of strips circling the tube that are handled via laser cuts strips of adhesive label stock. This was an incredibly anal-retentive approach, which I completely admire and it makes a huge difference in the appearance of the finished product. 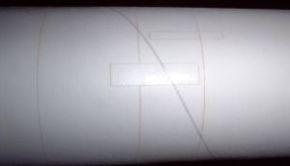 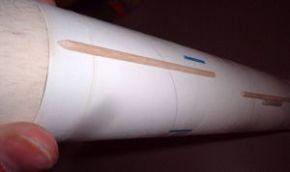 Additional tube details include a number of tunnels (S-IC/S-II and S-IVB), hydrogen lines, and LOX vent fairings. All of which are made from dowel stock. There are also laser cut plywood components for RCS nozzles, S-IVB Ullage rockets, and APS units.

The tower assembly consists of two base and frame pieces that slip together at right angles, a wood dowel tower, and paper shroud base. This assembly is then glued to the top of a balsa nose cone. The tower structure framework effect is pulled off through a set of laser cut cardstock that is tacked very carefully into the spaces between sides of the base and frame.

The only other aspect left in construction, other than tacking on all the details after painting, is the nose weight and recovery system. Because the fins are scale-like, nose weight will be needed for stability. This is added to the service module in the form of a washer and lead beads.

In order to protect the tower during recovery, the instructions show attaching a Kevlar loop from the base of the balsa transition to the washer that goes under the service module. Since this would result in a permanently exposed line, I decided to use the approach taken in the Apogee kit and leave the line inside the tube until time for flight prep, at which point I tie and tape a loop to the base of the tower.

Finishing:
Most of the details are to be painted before bonding and can then be tacked into place with CA. Masking and painting a Saturn is a fairly daunting task although the instructions do an excellent job of explaining what to mask and the proper sequence for painting. After masking bond areas, the main body gets a couple of light primer coats (and I used white primer) then a gloss white topcoat or two. Light paint is the key so that you don't cover up the details with a thick paint job.

Don't be faked into thinking that Krylon that is dry to the touch can be painted on right away. Give it a couple of days! After the white has had plenty of time to cure, the accent areas can be painted black and the service module gets silver.

One aspect of the finished scheme that irked me was the transition (S-II/S-IVB adapter). This has a tricky pattern of black and white, which was "simplified" by the inclusion of a pair of vinyl decals. One decal forms the all black quarter section and the quarter section that is only black on top. A smaller decal forms the quarter section that is black on the bottom. Unfortunately, the decals aren't quite tall enough which leaves a small gap at the bottom. The instructions suggest touching up this area with a Sharpie marker. Considering the vinyl decal doesn't quite match the paint finish and there would be an obvious visual difference between the decal and the Sharpie area, I think it would have been a much better idea to just mask and paint this pattern.

The Tango Poppa decals included in this kit are of a beautiful quality although extremely fragile. I especially had difficulty in applying the long, thin United States decals to the upper section. The result is a slightly flawed finish that will forever keep me up at night (or eventually drive me to buy replacements from Tango Papa).

Flight:
Recommended motors for this kit are B4-4, B6-4, and C6-5. Considering I was flying in fairly windy conditions (10+ mph winds) on a farm field of hard clay and mud, I decided to start off with the B6-4 option.

Stability was no problem at all and it wound up weathercocking a little bit in the wind. The 4 second delay was fine--it was nose down just past apogee. Altitude was fairly timid--only about 150 feet so I'll definitely by moving up to a C6 for the next flight.

Recovery:
The 18" red plastic chute is a good size for this kit and certainly is easy to pick up in the sky. Unfortunately, by following the instructions for mounting and attaching the chute, the upper portion is likely to come down nose first, which might cause damage even in soft grass. I'll blame this one on the hard dirt, but a fairly slow descent still resulted in a broken tower and one broken and lost RCS nozzle.

Author's note and update--Disregard my gripe about the shock cord mount. The instructions DO suggest a yoke, which I ignored in construction to go with the Apogee mount approach. I then forgot to actually USE that method when I flew it...

This really needs a yoke-type recovery harness looped around the base of the tower and then to the transition base with the chute attached to the shroud about 2/3 forward so that it comes down at an angle. This would avoid most of the stress on the tower from landing.

Summary:
PROs for this kit include exceptional detailing and scale accuracy. It's a true modelers kit.

CONs for this kit would be the damage prone recovery system and the relatively high cost of this kit, although I do think given the details that this kit is a decent value and accurately priced.

Author's note--Disregard my gripe about the shock cord mount. The instructions DO suggest a yoke, which I ignored in construction to go with the Apogee mount approach. I then forgot to actually USE that method when I flew it...

Outstanding review, mirrored my experience exactly. The laser markings on the main body tube were a huge help. I too thought the transition "decal" wasn't up to the high standard of the rest of the kit and the long "United States" decals gave me fits. If I were to do it over again I would put it on in 2 pieces. All in all, a great looking model with a number of unique build elements.