Brief:
The Nike-K is a sport scale rocket based on the Nike booster. This is a review of the older, out-of-production version that uses the one piece fin can.

Construction/Finishing:
The Nike-K was packaged in the usual clear plastic bag with a full color picture of the completed rocket on the cover. All of the parts were accounted for and undamaged. This kit contains: Two body tubes, one nose cone, a reducer, a motor mount/fin can, and the usual recovery components: shock cord, parachute, and a sheet of stickers printed on white self-adhesive paper.

The Instructions follow a logical order and are copiously illustrated. Quest rates this kit as a skill Level 2, however, it is only slightly harder than a skill level one kit and would be a good second or third rocket. The only "gotcha" in this kit is the mix of using plastic components as well as the paper components. Care must be taken to use the appropriate glue for the proper components.

I deviated slightly from the instructions to allow for an easier painting of the model. The plastic fin can and the plastic reducer are molded in an orange-ish color and the plastic is very translucent. I also noticed that the fin can and reducer are red-orange and the rest of the rocket is white. As a result of this, I built the rocket in four subassemblies, painted each subassembly, and then did the final assembly. The first subassembly is the fin can and motor mount. Follow the instructions for this, but do not attach the Kevlar yet. Next is the reducer subassembly which consists of gluing the two pieces together with plastic model cement. Now these two subassemblies can be set aside and painted. Make sure that you mask off the parts of the adapter and fin can that will be glued in later steps. I painted mine Krylon Red after a coat of primer. That combination made a nice opaque color that looks much more realistic.

The last two subassemblies are the upper and lower body tubes. I first filled the tube spirals with Elmer's Fill 'n' Finish and sanded them smooth. I also decided that I would not be using the upper tube as a payload section, so I glued the nose cone to the upper body tube. The lower body tube only needs a launch lug attached to be complete. These two subassemblies were then painted with two coats of primer and two coats of Krylon White. After all of the paint is dry, the Kevlar® and elastic shock cord was attached to the fin can. The fin can was glued to the lower body tube, being careful to get the launch lug in the proper position, and then the reducer was glued into the upper body tube. At this point attach the shock cord to the upper bode tube and the assembly is complete.

Since all of the parts were painted as subassemblies, all that is left is the application of the stickers and a final clear coat to seal them to the rocket. I found that the stickers that were supplied with this kit were thick, ugly, and did not match the white that was already on the rocket. After I applied the one black and silver wrap above the reducer, I dug into my parts box and came up with several left over decals from other model rockets and airplanes to finish out the details. These were then covered with a coat of Testors Dullcote, to give that flat military styled finish.

Flight:
The list of recommended motors for the Nike-K are the B6-4 and C6-5. Preparation consists of inserting the motor which is held by thin metal clip and adding recovery wadding and the parachute. 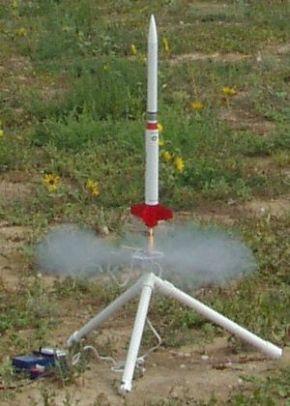 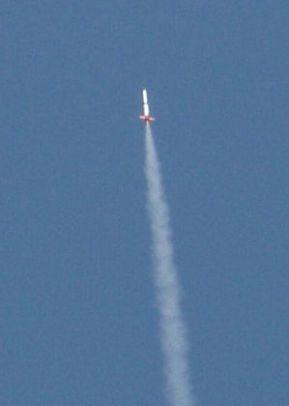 I have had two flights on the Nike-K so far. The first was on a B6-4. This flight was near perfect with a straight boost followed by ejection just after apogee and the rocket landing within twenty feet of the launch pad. The second flight was on a C6-5. The Nike-K leapt from the pad for another perfect flight. The flight was very straight even in the 3-5mph winds. Ejection was at or near apogee and it left a smoke ring in the sky. The only issue was that one of the gripper tabs on the parachute came loose, otherwise it was another perfect flight. Both flights were recovered with no damage to the rocket. 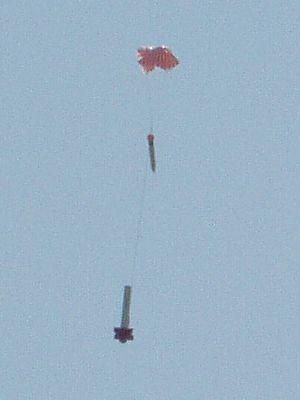 Recovery:
The shock cord is the typical combination of a lower Kevlar® leader tied to a round elastic shock cord. This is then tied to the reducer at the base of the payload section. The parachute supplied was a thin plastic sheet with the gripper tabs that Quest is no longer using.

Summary:
This is one nice beginners rocket. The instructions are clear and concise and the rocket is sturdy and flies great. The Kevlar® shock cord will last a good long time and the rocket has a nice military look to it. The detractors are the parachute, which Quest has now improved, the translucent plastic which is easily cured with a coat of paint, and the thick self-adhesive stickers for decals. These are all minor issues that have been fixed or are easily remedied and do not effect the overall good construction and flight characteristics of this model.