“The HI-TECH H45 is a smaller version of LOC's famous EZI-65. It has a single 38mm motor mount. This hot performer has been tracked to over 3500 ft. when flown with long burn "H" class motors.”

This is a typical Loc kit; strong (for paper) airframes with a 38mm. Motor mount, strong plywood fins (3/16 in.?), and an elastic shock cord. This kit could be called a classic (there are few high power flyers that have not seen one) loc kit. Like a stretched Graduator (with larger fins perfect for long burn motors), this kit can go on an F25W-4 or an I just as well (but keep an eye on the thrust and altitude!). 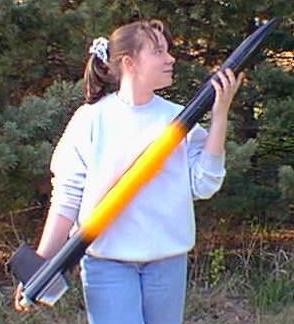 The kit comes in the typical plastic bag but the parts seldom break. Construction is very simple (less than 15 parts) with 5 min. epoxy and 30 min. epoxy for reinforcement. The fin tabs are actually pretty long (unlike the smaller Loc kits). The nose cone is very strong (as usual) and the payload is good for some storage (or just stability for the low thrust motors).

I have made two High Tech H-45 kits, the first was my next rocket after a Graduator. Because this first H-45 kit was lost in a tree, I eventually got another High Tech. The fins can be very strong if they are coated internally with 30 min. epoxy (keep the aft centering ring out during construction, and pour the epoxy into the room between the fins).

The first rocket took to the sky on an F25W-4 for a low and slow flight. I replaced the 28” stock chute (way too big for this rocket!) with an 18” chute. Despite this change, the rocket drifted into the only tree near the pads and got tangled. (The rocket is probably still there today!)

My next kit, purchased to replace another lost rocket (I always need a light 38mm rocket on hand for some reason…), was built to be stronger (for my 38/360 RMS can) and painted with gloss black and day-glow green for visibility. The flight, my level 1 cert, was on an H238T-10 (a powerful little thing!). The flight was nice and fast with an altitude of around 1600 ft. Because this flight was at RATS (2000), I assumed that the stock 28” chute would be fine, but I nearly lost the rocket to the creek behind the field. After 30 min. of walking through 15ft. grass, I got the rocket back and received my certification.

Construction is a 4, the kit is easy to build and easy to fly (nice high performance) but it is not perfect; the paper frame and elastic shock cord are of limited strength.

I would rate the flight a 4 (out of 5) because this is just about as good as this type of rocket (paper airframe and elastic shock cord) can get, but it is by no means zipper proof. The shock cord could be replaced with Kevlar®, but I have never had a Loc recovery failure despite the elastic. I think that a strong version of this kit would be great on any 29mm or 38mm H, and the small I motors (or even the slow full I motors) would give very high altitude. I think that the I211 would not be out of the question, perhaps even the I284 with a long delay. Rockets like the High Tech H-45 are really built for slow, graceful flights so the G25W-5, H45W-10, and the mini H motors (H35, H55 etc.) are really the way to go. This is a great kit at a pretty low price that can take a wide range of motors, I recommend it as a good addition to any rocket collection. This encoded message has been converted to an attachment.

Over all, the kit is still a 4, but this is pretty good for a paper kit because it is a classic.

Being that it's one of the few mid-power kits that LOC makes that actually has fins that go through-the-wall and to-the-motor-mount, I would recommend this kit for anyone that wants a great rocket that will fly on anything from an F engine up to to an H. My only quibble with the kit (and most of LOCs 2.6" diameter rockets) is that the tubing is pretty whimpy compared to the other diameter tubing used in LOC kits. I wouldn't fly this bird on a high-impulse H or I motor without glassing the airframe. I would consider this kit a good alternative to the LOC Graduator as a first-time mid-power kit because of the better fin arrangement (TTW/TTMM).

I'm not the only one to find the fin slots poorly positioned in this kit! My addition of eight feet of 300 lb. Kevlar, a Quik-Linc, positive motor retention T-nuts and Kaplow Klips/Tripod motor retainer, 3/32" plywood fin strakes and Pratt Parachute Protector make the 28" 'chute just the right size. Could be a perfect dual deployment bird, she LOVES slow burners!

I build this fine LOC kit for two special purposes. 1) To fly an on board video cam 2) To fly on Nitrous Hybrid motors as an option I build the kit according to the instructions, and added a 2.6 altimeter bay in place of the standard bulk head. The stock payload bay has plenty of room left to hold the main chute included in the kit. We used a 38/29mm adapter to fit a Ratt Works H70 hybrid motor into the rocket. A vent hole for the 1/8? tubing was added to the side as well as the two 1/6? holes specified in the kit instructions. A perfect flite minialt/WD was added to the altimeter bay and ejection charges fitted. We fitted a camera and transmitter to the nose cone of the rocket. It was flight tested at Naram 45 on a G40, the dual deploy worked fine. Also at Naram, the Ratt H70 Hybrid was fired in it for a crowd pleasing flight. The comment from behind was "That was a Hybrid ?!?! At JMRC at the MIS speedway, we decided the rocket likes drogue-less recovery better and only used the main chute. This lets the rocket come in horizontal and right back to the pad. The crowd loves to see that bright orange chute open at 300 feet from the horizontal drop. It flew on a Pro38 H153 to 3000 feet. The next motor we will use is the Pro38 I205. This well built kit will hold up just fine.