Brief:
This classic has been reintroduced as a "limited edition" run for about a year now. It's a very unusual swing-wing design with the wing springing out at separation to convert the rocket into a glider. With colorful decals, it's a beautiful looking bird.

The instructions are typical Estes--fairly well illustrated and reasonably well written, although a bit confusing to follow with the combination of "major" numbered steps and "minor" lettered sub-steps. If you rush through construction, it's easy to overlook critical details buried in the sub-steps. Overall, this was rated a skill level 3 kit, which I think is a bit overstated as the construction really isn't that difficult.

Construction begins with the motor mount. It's a basic tube/hook/centering ring assembly, albeit using a fairly long (12") pod. The pod also offers extra stability during boost, and gets a couple of fins tacked on as well. They each get a brace too, which I thought was a little overly complex versus applying decent fillets. The pod gets one last overly-engineered detail: a dowel mounted on a 5-piece brace. The dowel winds up sliding forward to hold the wing in place during boost and when it (and the pod) slide back during ejection, the dowel releases the wing. 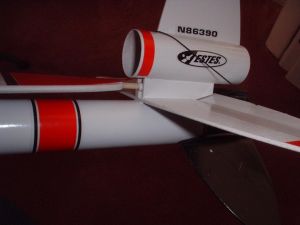 The wing "assembly" is comparatively simple thanks to a nice 3-piece plastic pivot assembly. There's a round base which slips into a pre-cut hole in the wing. A round top slips on from the other side of the wing, and the two parts are then held together by gluing in a plastic retainer cap. You need to be very careful with the glue, as excess can ooze out onto the pivot parts which need to be able to spin freely. The base of this assembly is molded to conform to the contour of the BT-50 body tube, so gluing onto the tube is also very simple.

Next up is tacking on the stabilizer at the rear, and taping on the elevators, which need to be able to flip up using some pretty wimpy elastic thread. On top of the stabilizer are a couple of trim braces to hold the proper elevator angle, a short BT-50 tube rudder, and a dorsal fin. 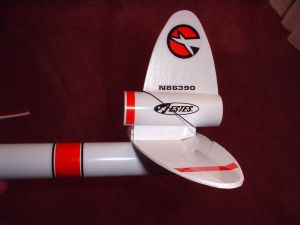 The nose cone gets a small clip bonded to it to keep the wing from breaking loose under boost. It should also only be friction fit initially until you've had a chance to adjust the nose weight, trimming based on actual flights rather than just hand-tossing.

Finishing:
While the paint scheme on this is simple, you'll need to be careful not to lay it on too thick. Too much paint adds performance-killing weight, plus it can gum up the movement of the swing-wing. Multiple light coats with sanding between coats is definitely in order here.

The pod should get some color to it to assist in tracking. The stock scheme is to paint the fins black and leave the rest unpainted. I masked off the rings, and painted most of the pod black, figuring that will help with spotting it on the ground and in the air if the chute doesn't deploy.

The glider is solid white. I used two light coats of white primer and two coats of glossy white finish. I followed up with one coat of clear.

Normally, I can't stand peel 'n' stick decals as they're hard to adjust and prone to fingerprint smudges. These decals though looked pretty sharp and I was careful to use tweezers to apply them. The decals really add nice accent trim and the result is an impressive beauty.

Flight:
Prior to building this, I'd heard lots of complaints about a number of problems with the scissor wing mechanism, the elastic line on the stabilizer, and the rubber band slipping off. I decided to come up with my own, less common problem. Despite a bulkhead and reasonably good friction-fit, the nose cone I'd tacked in place temporarily so that I could add/remove nose weight to trim popped off at ejection, resulting in more of a flopping maple-leaf "glide".

Recovery:
Given the nose cone snag, I can't really judge the recovery/glide portion of the flight yet. I'll have to replace the nose and add a comment later to update this review.