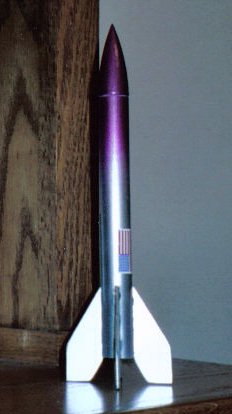 Brief:
This is a very basic 4FNC, minimum-diameter, streamer-recovery rocket suitable for beginners. It's part of Semroc's RetroRepro line and, specifically, the Micron was originally a Centuri model (#KA-5) first released in 1963. The RetroRepro line updates these old models with more current technology--in this case, the upgrades include laser-cut fins and a Kevlar shock-cord.

Construction:
This kit comes with the following components:

I ordered this kit directly from Semroc's web page. I had gone there to order a couple Rocket Racks and figured I'd get a kit while I was at it.

The kit comes in a plastic hang-bag just like an Estes or Quest kit. The "front" of the package, depicting the rocket is actually the front cover of a 12-page booklet, which includes brief history of both the Micron model and Centuri Engineering Company, the assembly instructions, an exploded view of the components, and the NAR safety code.

The instructions were extremely easy to follow, and I saw no need to deviate from them as I assembled my model.

The parts themselves were generally of very high quality. In particular, the balsa fin sheet was among the nicest bits of balsa I've ever gotten in a kit and the laser-cutting was very smooth.

The balsa nose cone was also a nice piece of wood but the shoulder was a bit too wide for the body tube. A bit of sanding fixed that problem right up however.

About the only part I would have any complaint with at all was the streamer--it's a length of orange crepe paper. I'm not sure how long it'll last (it already has a tear from her first flight), so I'll likely need to replace it at some point with something a bit more durable.

Finishing:
The illustration of the Micron on the front of the booklet has a fun, early 60's sounding rocket look to it. Unfortunately, the kit doesn't contain any decals, and it'd be a challenge for a beginning rocketeer to duplicate that look with paint alone, which includes a roll pattern. As I didn't want to work that hard, I decided to not recreate that look.

I used Elmer's Fill & Finish to smooth out the nosecone and fins, followed by a few coats of Krylon grey primer.

For the final finish, I applied a few coats of Testor's Chrome spray paint, then used Testor's Purple Metalflake spray paint for a "fade" pattern on the nosecone and top of the rocket.

Once the paint was dry, I put an American flag decal on the body tube (I got a sheet of flag decals by AutoGraphics at the hobby shop, and put one on each of my rockets), then finished with a coat of Krylon gloss.

Flight:
For the Micron's first flight, I used an Estes A8-3. The delay is a bit shorter than recommended, but I didn't have any A8-5s handy. The motor is a friction-fit and one wrap of masking tape around the motor was sufficient to keep it snug.

The instructions don't recommend a specific amount of recovery wadding; I used 3 sheets of Estes wadding, and found that the body tube with the wadding, the shock cord, the streamer, and the nose cone was pretty tightly packed. Maybe 2 sheets or a little dog-barf would be better.

She took off from the pad very quickly, as you'd expect given the light weight, and the flight was straight as an arrow. The ejection charge fired a bit before apogee, though that didn't surprise me, given I was technically not using the recommended motor.

As I noted above, the streamer is just a length of crepe paper--probably historically accurate, but it feels a bit flimsy. The streamer is attached to the elastic shock cord, near the nose cone with a tape disc.

On the first flight, everything deployed nicely, and the streamer fully unrolled. It seemed like it was coming down a little fast, but drifted only about 50 yards downwind from the launch pad. Despite the seemingly-quick descent, she landed with no damage at all.

However, as I was rolling the streamer back up to put the rocket away, I noticed a long tear in the center of the streamer. It will have to be replaced at some point.

CONs: streamer material is cheap, hard to re-create the finish as pictured without decals.