Brief
This is the second Custom Kit I have built and this is one long rocket. The size really intrigued me when I saw it on the rack at a local hobby shop. The statistics on the Equinox are Length: 78"; Diameter: 1.637"; Wt.: 5.8oz. Skill Level 2. 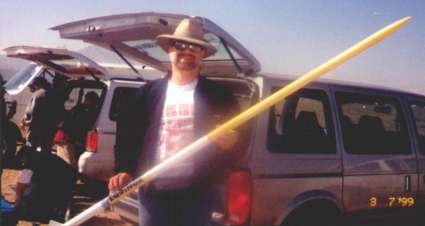 Construction
The Quality was very good. It came packaged in a plastic bag. All the parts were there and in good shape. It has four body tubes, three couplers, four Die-cut balsa fins, two 18 inch mylar 'chutes, plastic nose cone, all the typical motor mount items and one large decal. The instructions left very little to chance with lots of illustrations in a very logical order. The only template is for the fin-marking guide and is standard issue. CONSTRUCTION: (Rating 4.5)

If there is a gotcha, it is the length. Were I to build this kit again I would have it separate in the middle instead of at the nose. More for easy of transport. (I have to thank my wife for insisting on getting a mini-van.) Also I would replace the motor hook with a thicker one. The instructions call for assembling the lower tube separate from the rest. This is a great help when attaching the fins. (See the Flight). I used 15-minute epoxy throughout. A nice touch on the fins was a mark on the root edge. The fins could be turned the wrong way if you don't look at the grain carefully or don't know about this.

The shock cord typical elastic and tri-fold paper mount. The shock cord is of a good length, but I doubled it out of habit. (I use it for my Estes Prowler). I also for the first time tried two Centuri Baffles in this kit. I built one using the coupler near the motor mount and one between the top two sections I put cardboard with holes punched in it in the top & bottom and glued them to the coupler.

The recovery is by two 18 inch 'chutes that are silver mylar with tape dots for shroud line retention. I have modified this, as I have since 1969, when I was introduced to the hobby. An old timer who's name I can't recall showed me to put the tape dot on, put the hole reinforcement ring on the back, and using an Xacto drill a 1/8 inch hole in the middle. The finished rocket over all is impressive in size. EASE OF BUILD: (Rating 5)

Finishing
There are no special requirements or techniques for finishing. I followed the paint scheme on the supplied card. The one decal is of the peel and stick. Using the soapy water technique it went on easily. The one thing is I needed to do is to cut it around the launch lug. The finished kit got many "Who makes that kit, and where did you find it?" and "It looks classier than the Mean Machine!" at the first launch I brought it to. FINISHING: (Rating 5)

Flight/Recovery
The recommended motors for this are D12-5 & E15-7. I have flown this four times on the D12-5. The one gripe I have with Custom is the motor hooks. They are thinner than the Estes counterparts and I have only recovered the Equinox with the motor one time. With the baffles preparation is: put the 'chutes in and away to the RSO.

The first flight was on a cold gray day in December. I was impressed by the slow lift-off climbing straight up with no wobble or wind cocking. The delay was just right both 'chute blossomed and it softly landed about 500 feet from the pads after reaching an estimated altitude of 600 feet. (wRASP) Upon recovery I found the motor had kicked out. On the second flight the same result and during recovery only one 'chute fully opened. I guess it sat on the pad too long for the 33-degree temperature. No damage upon landing, the motor kicked out again, only this time the motor hook was slightly burnt.

The next flights came in February. It is a typical winter in Denver, Colorado, about 55 and a slight breeze. The flights were great, with the slow rise and gentle turn at apogee. The 'chutes opened and they brought the rocket down gently. On the first flight I taped the motor in, but it kicked. On the second flight I also wire tied the motor with the tape and it held. I like the way the multiple 'chutes look, but for ease of preparation, a single 18 inch or 24 inch would work. I can't wait to send this up on an E15-7, with an estimated altitude of 1775 feet. (wRASP).

Summary
Everything considered if it were not for the motor kicking the rating would be a 5. I just love the way this kit looks and flies. The kit retails for $ 19.95 and I believe it is work every penny. The biggest obstacle with the kit as far as its durability is getting out the door and to the launch sites. I really like the Custom kits as they have the flavor of the kits available in the early '70s.

I surprised everyone at the field with my Equinox when it flew. A bit of a wobble that others said meant I needed a bit of noe weight. Can't wait to try it on an E.

My experience with the Equinox is very similar. It is a great honking huge rocket that goes together very quickly. It's size makes for impressively slow launches and is a real crowd pleaser. I've heard it has been discontinued, so if you can find one, buy it and build it.. you won't be disappointed.

Flew it on an E-18. Very nice flight. Still very happy with this rocket. Only thing I would have changed is to make it a center-break. This would make it easier to transport! Very light, and very straight flights with the extra power. Considering a second!

The Equinox is back in production now. I got one and we will probably use them for our annual October Skies Boy Scout Troop launch. I built mine mid-September. One issue I would take with the design is the current motor mount. It uses 4 heavy card centering rings, which "sandwich" two undersized spiral-wound centering rings (24mm to possibly BT-55 or BT-60--I don't have the instructions anymore), which don't make contact with the airframe. I would think it would be stronger to just use bigger spiral CRs because more surface area would be in contact with the airframe. But it is a really nice kit and I can't wait to fill the sky with them.