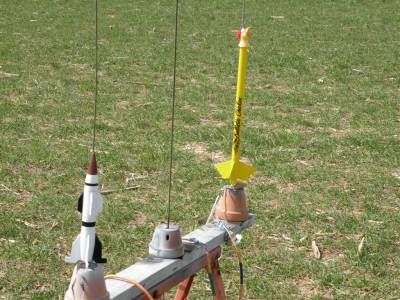 The Ballistic Chicken is a basic 3FNC, 18mm-powered rocket...with a cool chicken-head nose cone. It is the first offering from Australia-based I Build Rockets. This was a beta test build, so the final kit may vary slightly. (I modified the shock cord attachment.)

Thanks, Sascha, for providing the opportunity to test this interesting kit...and for putting up with the long delay in flying it!

The Chicken's body is an 18” length of BT-50. The 18mm motor mount assembly includes 2 wide cardboard centering rings, a block and a motor hook. The fins are laser cut from lite ply, which is especially nice given the feather pattern on the trailing edges. Recovery is via a 12” Mylar ‘chute, which includes a swivel. The shock cord is elastic and is attached with the venerable tri-fold mount. That leaves the plastic chicken head. This goofy looking chicken (read that as "cool") includes a plastic shoulder with a built in wire hook.

The instructions are pretty basic but the build is straightforward. The mount builds like any other. I liked the laser cut fins. They appear to be lite ply and are both sturdy and easy to sand. There isn’t much grain so I merely sanded the leading edge round and gave them a single coat of Fill’n’Finish. There is a also a laser cut stand-off for the 3/16” launch lug. A wrap around fin alignment guide is provided. I used Titebond Trim and Molding glue throughout for bonding and fillets. 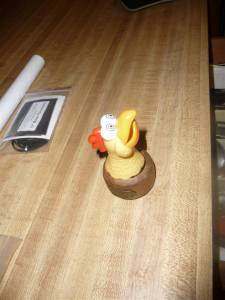 I hadn’t used a tri-fold mount in around 15 years but didn’t have my standard Kevlar twine on hand so I initially used the mount. However, due to unforeseen circumstances, the Chicken sat around unfinished for several months. During this waiting period, I Build Rockets released some nifty laser-cut plywood parachute anchors. So, I pulled out my trusty wood working knives and removed the tri-fold mount. The 24mm anchor kit (see photo) includes the plywood anchor, a screw-eye, a snap swivel, and a short Kevlar leader. You attach the screw-eye in a pre-cut center hole and apply a dab of Epoxy to insure it stays there. The Kevlar leader connects to the swivel and the elastic shock cord. Since this assembly must be installed several inches down into the body tube, make sure you attach said swivel to the screw-eye! I then swabbed some glue deep into the tube and inserted the anchor using a long hemostat. It took a little manipulation to get it positioned properly.

The 'chute is pre-cut and includes the holes. You tie the three riser lines on and attach them to the swivel. Since this is not a snap swivel, attaching it to the cord requires that you tie a loop with the swivel and 'chute attached. Not hard, but a snap swivel would avoid this (and make the ‘chute removable).

The prescribed paint scheme is bright yellow, so a white primer is required. I used 2 coats of Painter’s Touch primer. After a day, I sprayed 2 coats of ‘new’ Krylon. The latter covered well but I didn’t like the wide spray pattern. One water slide decal is provided, which really spruces the Chicken up. It is a good quality decal and was easy to position. After another day of drying, I shot a clear coat to protect the decal.

The recommended engines are the B6-4 and C6-5 so I started with the B6. I used dog barf and tamped it down onto the shock cord anchor. The cone is a little loose so I added some masking tape until it was snug.  The Quest B6-4 gave it a nice flight.

Ejection was with the nose down.  Unfortunately, one fin stripped off at ejection.  It was found later in the day but there wasn't enough time to make a field repair.  I wonder if the thick Trim and Molding glue didn't adhere well?  When I re-attach it, I'll use plain old wood glue.

The shock cord anchor worked great!  It keeps the 'chute near the front and, despite it not being a baffle, seems to help protect the 'chute.  I say this not only because there was no damage, but the wadding was still in place.  I hear these anchors will be incorporated into the kit.

The thing that I liked most about this kit was the off-beat chicken theme.  I just love the head/cone!  I also liked the laser cut fins.  I'm glad that future kits will have the plywood shock cord anchor. I assumed they will when assigning a numerical rating.

The Chicken flies just fine.  The one hiccup was the fin shearing off.  This may have been partially due to my choice of glues.  At this writing and having only one flight under my belt, I'll rate the flight as 'good' (I consider that average) and the overall rating as very good.

Since the new EMRR/RocketReviews.com should allow me to edit this review, I'll update this after I fly it again.

The only 'gotcha' I see is the availability of the kit.  Australia is far away and shipping isn't cheap.  If you have an interest, contact Sascha via his web site.  Maybe he can strike up a deal with a U.S. based supplier? 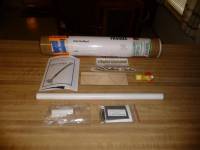 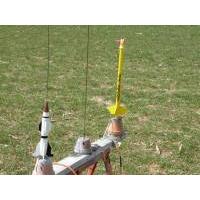 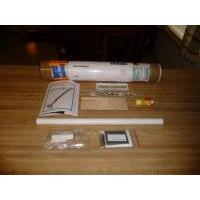 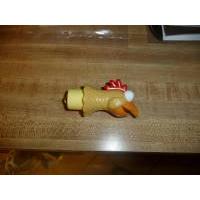 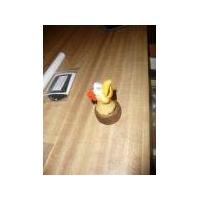 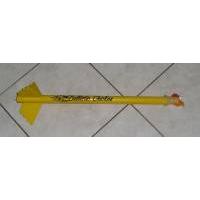 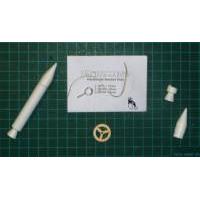