The Estes Challenger II is another in the line of rockets that uses the fin can that originated with the Enerjet 1340 and is currently available molded in yellow as part of the Estes Eliminator.  The Challenger II is a fairly versatile rocket that can be built to fly on motors from 18mm to 29mm depending on the size of your field.  My field is B6-4 Field, and since they don't make a 29mm B engine, I went with the 18mm mount.

Basically all you're doing for this bird is building and installing the engine mount and a recovery system, which is generally tied into the engine mount in these days of Kevlar.  I tie the Kevlar behind the forward centering ring, glue it in place with the glue fillet for the engine tube/centering ring joint.  A 1/16" slice is made in the outside of the centering ring and the Kevlar then led through it and taken out through the front of the body tube.  The glue fillet created when installing the mount in the body tube also seals the slit and further anchors the Kevlar.  A matching length of 1/4" sewing elastic is then tied to the Kevlar at one end, and to a snap swivel at the other, which attaches to the ring on the nose cone.

The fin can can be attached either before painting or after, depending on how much you like masking.  I'm not a fan, so I painted the fin can first, then installed it.  Installation was a matter of sliding the fin can up over the body tube from the bottom.  I then laid a thick run of epoxy into the built-in launch lug and turned the fin can 1/4 turn.  This spread around the epoxy and left the launch rod with a clear path to slide through.

While the body tube itself needed to be cleared of offending tube spirals using the standard primer, thinned Fill & Finish, sanding, repeat method, much of the finishing for the Challenger II is done before construction is completed.  The fin can, body tube and nose cone are all painted a different color.  The fin can was masked off inside and painted Valspar gloss black.  The body tube was masked off so that the section covered by the fin can wasn't painted and the unmasked section was painted with Valspar gloss white.  The nose cone was painted yellow with some really old yellow spray paint with no label and nasty consistency.  Despite that it really dried to a nice looking color.  I printed the decal from a scan at YORF, http://www.oldrocketplans.com/decals.htm (thanks to John Brohm,) and printed it on Bel Decal paper using my inkjet.  Excelsior doesn't list them on the website, but I'm pretty sure Gordon could handle them if you were to ask.

Stability is the word for the flights of the Challenger II.  To date, it has flown only on B6-4 engines at B6-4 Field.  I took it to NARAM last year, but RSO duties and a family funeral that caused me to have to leave early kept me from stretching the bird out on the mighty C6-5.  First flight was in the spring of 2013 on a day too good not to fly at least something at the empty field, and I had a bunch of winter builds just itching to fly.  The B6-4 seemed somewhat underpowered on this flight, something I attibuted to the extra weight of the plastic fin can.  The Challenger II flew dead straight to about 400', but tipped over and was well on the way down before the ejection charge fired.  I didn't notice anything oddly long about the delay, and I had no B6-6s in my motor box, but the flight could have definitely used a B6-2.  The flight was low enough that I could clearly hear the "clunk" of the nose cone hitting the top of the body tube.  I expected a huge Estes Dent based on what I heard, but the only thing I noticed from a damage standpoint was a slight bit of chipped paint.

The second flight came almost a year later, again at B6-4 Field, again on a perfect day for any outdoor activities.  The winds were slightly more of a concern on this day, but I set up in the back of the field with the big hill at my back.  This gave the flights a wind free fifty feet to get off the pad.  The first flight on the day left the pad and jigged to the right, but never left the confines of the field.  It topped out lower than the previous flight due to the winds and at ejection it was in deepest center field.  Winds were from the west that day, so it recovered near the trees in left field, but not near enough to the trees to cinch me up.

The third flight was the closing flight on the same day, and it was just as I would have planned them all if I tried planning them all.  (I do, but my rockets are only vaguely cooperative.)  The flight was arrow straight to 300 feet, and had just tipped over when the ejection charge fired.  It all happened directly over my head, so I caught the whole sequence on my camera.  The reefed 18" chute carried the rocket across the field toward US 27 and the trees that line foul territory, but it never seemed to be in any danger, and in fact fell well short of any problems. 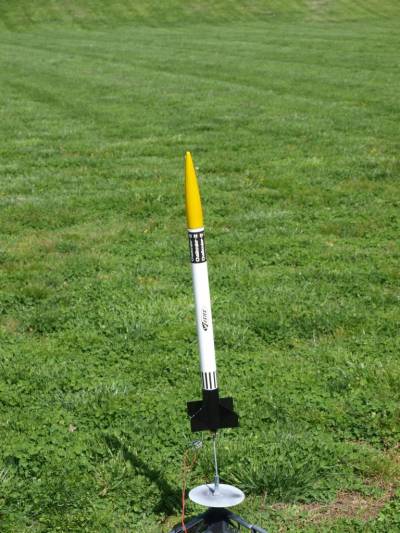 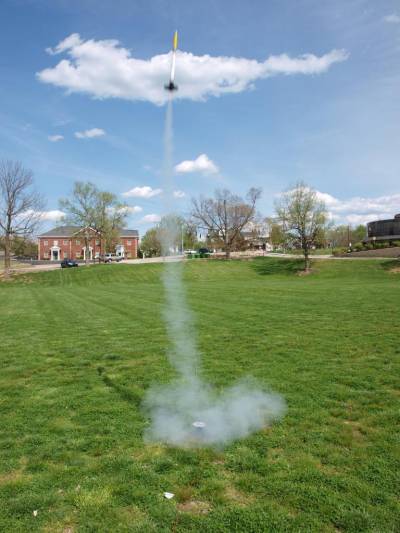 The Challenger II is of decent size and fairly heavy, especially if painted as piggishly as I tend to paint.  I use an 18" chute, generally a stock Estes chute with the center cut out to bring it down below tree level a bit quicker. 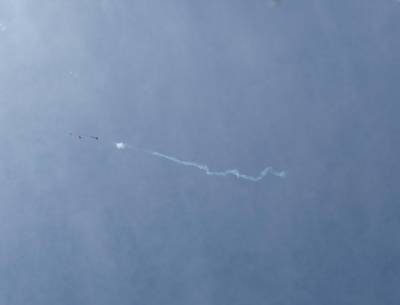 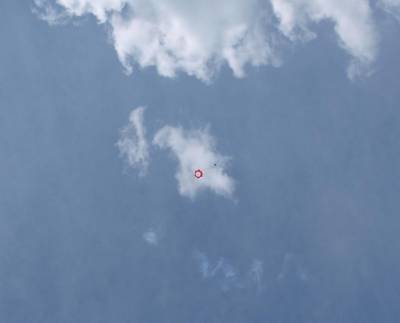 Pros: Seldom seen oldie with classic Enerjet lines.  Great small field performance with an 18mm engine mount, but both 24 and 29mm mounts will fit.  Estes has been running specials on the Eliminator and other rockets on their website every couple of months since Christmas, deeply discounting the kits.  You can build an Eliminator, a Challenger II and an Enerjet 1340 on the cheap when these sales hit, which always seems to be around some kind of holiday.  I'm thinking Memorial Day for the next one, but we'll see.  Good times.

Cons: Heavy with the plastic fin can, but this is stretching it.  I just hate leaving this space blank.

Glad I laid in a supply when I did.  Wonder what happened to my pictures?