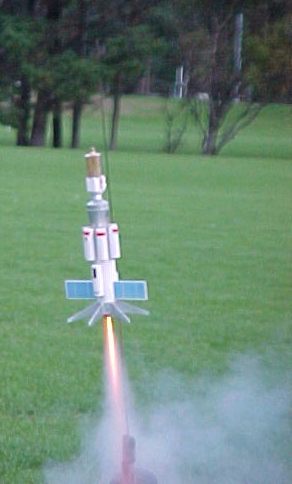 Brief:
I chose this rocket because I was sick of all the "normal" looking rockets. In New Zealand, only Quest and SOME Estes kits are available, and a look through what was available in NZ made me realize that, on the most part, they all looked the same. Then I came across this little beast! A very unusual "rocket" indeed. Looks just like its full-sized counterpart, with "solar panels", "fuel tanks" and a unique nose cone assembly. Six (6) fins at the base of the satellite provide good stability to this high-drag rocket, and six (6) "fuel" tubes make this rocket stand out from the crowd! It is now the most popular rocket in my small local rocket club and is a firm favorite of spectators.

Construction:
The heart of the kit is the unique molded nose cone, which is rather difficult to describe, so check out the pic included with this review. With 10 cardboard tubes in the kit, it pays to identify them a.s.a.p and mark them with a pencil. Fins were well made.

This kit is not hard to make, but does require patience and attention to detail. With 6 fins and 6 "fuel" tanks having to be installed, it does get a bit tricky. But patience and attention to detail with result in one hot looking rocket! A word of warning and advise. Make sure you fillet the fin/body tube joints WELL, as they can be a bit fragile. Fuel cells are just over 2" long tubes, which are topped and tailed with cardboard discs. Two rectangular "solar panels" are installed on the body tube just above the fins. NOTE: When you mark the body tube as per the fin marking template included in the kit, make sure you write down in pencil on the body tube exactly WHAT each line/guide is for, as you need to draw 16 lines in all!

Finishing:
Paint the rocket as per the instructions, ie: white body, silver fins and nose cone. I found when I coated the finished rocket with clear paint, the chrome-painted parts dulled, which was a little disappointing. I HATE water-slide decals! I see this as a major downfall. I thought water-slide decals disappeared shortly after my youth, but obviously the need to make a few cents extra by using cheap water-slide decals is all powerful.

Flight:
The 18mm motors are retained by a Estes motor clip. After having a few problems in the past with Quest motor clips breaking and bending, I found this particular clip to be far superior. Well done, Estes! There is a lot of parasitic drag on this rocket, and you really need to launch it on a C motor. I prefer using a C6-3 for this baby, so that it looses as little altitude as possible after apogee. With its low-speed take-off's, it REALLY does look impressive, indeed! Max altitude is around 300feet.

Recovery:
I love Estes parachutes! Having been disappointed with Quest parachutes, it was good to find a half-decent parachute from Estes. Standard Estes shock-cord mounting is used. Do put an extra sheet of wadding in it. One of the downfalls of this kit from a purely cosmetic aspect is the fact the the tops of the fuel cells gets a bit "burned" by the ejection smoke. I have suffered fin damage on more than half my flights, this is due to me launching it in less-than-perfect weather conditions. If launched on a clear, fine day with no wind, everything is fine.

Summary:
If you want a rocket that is "different" and unusual, go for this one. I don't know if the SDI Satellite is still in production, as we in New Zealand are, alas, behind the times.