Brief:
After doing my Level 1 certification with a scratch built rocket I decided that my next rocket would be a kit with all the hard parts already thought out for me and all the necessary parts all together in a kit. I also wanted my next rocket to be able to do dual deployment and Level 2 motors. After much online searching and feature and price checking I decided on the Madcow Rocketry 4" Patriot.

The Madcow 4" Patriot is a simple 4 fins and a nose cone 1:4 scale model of the Patriot missile. It is 4 inchs in diameter and 52.5 inchs long. It has the option of a 54mm motor mount or a 38mm motor mount. You also have the option of a Nomex® blast protector and a 36 inch nylon parachute. With recovery the kit will cost you $100 dollars plus shipping. Without recovery the kit runs $75 plus shipping.

I think this is a nice feature to save money for people with plenty of parachutes and parachute protection in their range boxes. Motor retention is also left to the flyer. I ordered my kit with a 38mm motor mount, no recovery and added a $10 Madcow 38mm motor retention system.

Construction:
The kit comes with all the basic parts to fully assemble the rocket except for motor retention. The only thing to add is motor retention, glue, finishing items (sand paper, primer, paint, etc.) and optional upgrades such as hardware necessary for dual deployment. All fins and rings and bulkheads are laser cut. The parts included are: 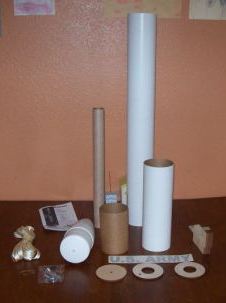 I deviated from the provided instructions and made this rocket dual deploy capable. I cut 1" from the lower body tube and epoxied this to the center of the coupler, then I drilled vent holes and cut a hole for the key switch to arm my altimeter.

I epoxied a couler bulkhead to an airframe bulkhead, both from What's Up Hobbies, then drilled two holes for the all threads going through the Av Bay. I drilled matching holes into the coupler provided with the kit and then epoxied this into the forward end of the coupler.

I attached the all threads to the forward bulkhead and expoied the nuts and washers in place. Terminal blocks where installed on both bulkheads along with eye bolts for shock cord attachment. A custom sled was made from plywood on hand and thick paper tubes that the igniters from Aerotech reloads come in. I attached the forward body tube to the Av Bay with plastic push rivets.

I place epoxy on the fin roots and filleted the fins where they joined the motor tube, the inside of the airframe, and the outside of the airframe. After the Madcow motor retention was installed on the rear centering ring, this was epoxied in place.

A custom cut centering ring with two "T" nuts and an 1 1/4" inside diameter cut was then installed into the nose cone at the top of the shoulder, but still below the part of the nose that sticks out of the body tube. This ring is held in place with four small stainless steel machine screws that are screwed directly into the ring and an epoxy and fiberglass fillet. Two short sections of all thread where epoxied into the "T" nuts. I then installed a "U" bolt and a long section of all thread, that extends to the tip of the nose cone, onto a custom cut bulkhead.

This bulk head is held in place on the two short sections of all thread with nuts, washers, and wing nuts. The idea is to add or remove fender washers to the long section of all thread to adjust the CG as needed for larger motors. This system was used for my Level 2 Certification on an Aerotech J350.

PROs: All the parts fit very well. Only the lightest of sanding was required on the fin slots to make the fins go in a little more smoothly. The body tubes where high quality with a nice tight outer wrap with minimal groves. The instructions where very basic but clear with minimal easy to follow drawings. Included was a nice scale drawing with the typical test pattern paint scheme. The instructions also tell the user where the CG should be.

CONs: None that I can think of.

Finishing:
Finishing was easy with the usual filling of groves, priming, sanding, and painting typical of any rocket. I painted mine in a scheme similar to operational Patriot missles. The vinyl decal was high quality and adhered niclely to the paint and looks great. 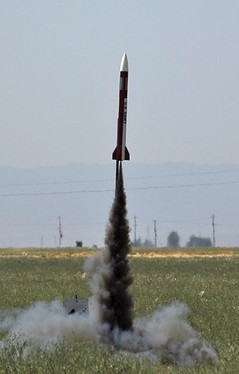 Flight:
The first flight was at Tripoli Central California's monthly launch at Maddox Dairy on a nice windless day. I choose a CTI H123 Skidmark with a 7 second delay. The rocket left the pad quickly with a nice roar, smoke and sparks. The Patriot flew straight and true to about 1000'. The delay was a tad long for my tastes but no harm was done. It floated down nice and slow on a 70" Top Flight parachute. This size parachute is way oversized for this rocket and can lead to a long recovery walk on a breezy day.

On a spur of the moment thing I took and passed the Level 2 certification test and took advantage of Aerotech's spring Certification special and purchased a J350W. After assembling the motor and preping the rocket I took it out to the pad. It ripped off the pad right into the sun where I lost site of it. The RSO kept it in sight and was able to point it out to me. The nose cone popped at or near apogee, but the parachute was stuck in the tube! After several heart stopping seconds the parachute worked it's way out and inflated nicely way out near the horizon. After a mile long walk, half of it through waist high wheat, I found the rocket, undamaged. After trekking back to the flight line the RSO inspected the rocket and signed off on my Level 2 certification.

Recovery:
The 17' of shock cord seems a bit short for rocket of this length so I added two sections of 10' shock cord for my flights. Built stock I think the optimal 36" parachute would be fine. The 70" I used for the modified kit makes for a nice slow decent on a windless day, but I long walk on a day with even a slight breeze. If the kit is modified for dual deploy, I think a 45" parachute would do very nicely.

Summary:
I think this is a great kit. It would be excellent for a first HPR kit. It is perfect for Level 1 certs, and Level 2 on J motors. It is loads of fun with motor eject and H motors. I don’t have an altimeter yet, but the kit is easy to modify to dual deploy with just a few extra parts, and I suspect it will perform very well in a DD setup if the flyer gets their part right.

I would recommend this kit for first time high power users, or as a first DD rocket.