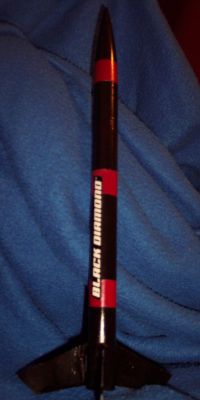 As with all the Estes kits that I have seen, the instructions are well illustrated and a breeze to follow. I loved the fact they included suggested fin configurations.

The only problem I had with the construction is the fins. I chose to only put 3 of the 5 fins on the rocket. Since the fins are cardstock, they are fairly flimsy. To add to the problem you are supposed to sand off the tabs that held them to the sheet. This further reduces the stability of the fin because the cardstock begins to separate (it's in layers). After finishing it wasn't too noticeable, but was still a problem.

Overall it was a good construction and one I would recommend for beginners.

Finishing:
This was an easy rocket to finish especially since there was no balsa to fill. You can do it very simply with one color or add multiple colors to add interest. I didn't fill the tube spirals, but I did use three coats of sandable primer which covered most of the spirals up. The first step was to put three coats of primer (wet sanding between each coat) on it. Then put a coat of red on it for accents. Next I masked off the areas I wanted to remain red and then coated it with a black top coat and a clear coat. Finally I put the "Black Diamond" sticker decal on the rocket. Fin decals are included, but I decided to forgo putting them on because I thought it looked better without them.

Flight:
In order to prep for flight, use a few sheets of wadding. Then in order to put the streamer in the rocket, fold the it in half and then in half again and roll it. Wrap the shock cord around it loosely and then put it in the body tube and put the nosecone on. The motor much be friction fit to keep it in the rocket.

The first flight was with a A8-3 since it was to be launched on a small field. The flight was nice and straight and higher than I expected. The streamer ejected at apogee and the rocket recovered nicely.

The second flight was also with a A8-3. The flight was good, but the streamer ejected late because there was a little too much wadding.

The third flight was another A8-3. This time I reduced the wadding to prevent the problem that was seen in the second flight. The flight was excellent, but the streamer came back a bit burned. The fins got a little damage from a slightly harder landing than I expected.

Recovery:
The shock cord mount is a typical Estes mount. You are instructed to glue the shock cord in a paper mount that you cut out from the directions. Then the mount is glued into the body tube. The cord is a good length and held up well in the three flights the Black Diamond has had. I might have chosen a slightly bigger streamer, but it seems to work fine so far. I might replace it since it got singed in the last flight.

Summary:
In my opinion, this is an excellent rocket for the beginning builder. Estes made a good choice when they included it in the starter set.

PROs: The design allows for multiple fin configurations. I also love it when a kit lets you decide part of the design. Easy to build--great for beginners.

CONs: The Cardstock Fins--the fins are very easily damaged. It seems that it is not difficult to knock them.

I really didn't like the card stock fins at first because mounting them securely seemed to be impossible. Then I came across an idea... I took a really sharp knife and I scraped the mounting side of these fins until they freyed out 3-4 times larger than normal. After this they mounted easily and finished product they are RIGID and very sturdy. Good news for a father of 2 boisterous kids (6,8)... First launch (A8-3) I had used 2 sheets of wadding, and it was too much. The top didn't pop off and it darted into the ground. Beautiful flight, scary landing. 2nd Launch 1 sheet of wadding A8-3 was perfect. 3rd Flight the same result... Perfect. 4th and 5th Flight we used the larger B6-4... This rocket flew to an incredible height and the wind carried to the limit of our field. What a great day shooting this wonderful Rocket. Everyone should start with this rocket!! Having shot many of Estes Rockets I have never been as impressed with a simple cheap and easy thrill as this.