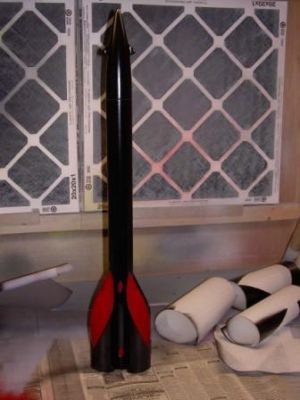 Construction and Finishing:
The package was shipped with no damage. Packaging was excellent. The instructions were clear throughout and were injected with a lot of humor. This was a good thing for me because it fits right in with my sense of humor and added to my enjoyment of the kit. Your mileage may vary.

The instructions start out with a complete parts list including the fin alignment guides and canard patterns, which are printed on the back page of the instructions. Step 1 of the "Assembly Destructions" was to check everything against the checklist. Everything was present so on with the build.

The first assembly step is to use filler to fill the seams on the body tubes. This may not be your first step with other kits, but I highly recommend following the destructions and doing it first. Unlike your standard fin rockets where you can easily get to the body tube to fill seams after the fins are on, this won't work with the Kraken's tube fins. Unless you don't fill seams at all, fill them first. 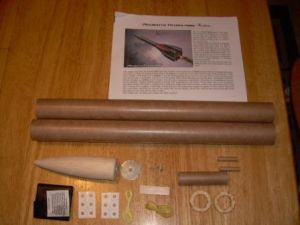 I had absolutely no problems following the destructions for marking up and cutting out the tube fins. The text explains the process quite well and the pictures just make it that much clearer. Over half of the destructions are devoted to marking and cutting the tube fins. Even if you can't read, the pictures would be enough to get the fins cut out correctly. A new hobby blade was recommended and used. This is something that can easily be overlooked, but shouldn't be.

Step 12 is actually a suggestion on how to finish the model. There are several suggested methods. I followed the destructions pretty close. One additional step I used, which I use with almost all of my tubes, is to use CA along the end of the tube. This soaks in the end grain of the tube and strengthens it. I used CA along all the edges of the fin tubes and launch lugs. The destructions say to put ¼" tape on the fin tubes and the fin and launch lug lines on the body tube where they will be glued together. I highly recommend this also. I put the tape in place, and then I finished the filling and sanding of the fins and body tubes. I then primed all the parts, sanded, re-primed, and sanded again until everything was ready for final paint. Don't forget to fill and finish the inside of the tube fins. 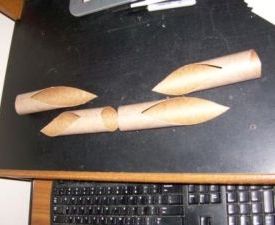 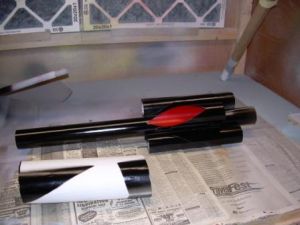 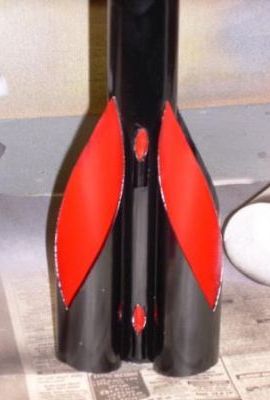 I really liked the black and red paint on the illustration of the model and used the same pattern. I painted the inside of the tube fins and launch lugs red. If you are going to do this, I highly recommend making sure you have a heavy layer of paint in the upper parts of the fin. I used rolled up paper to mask the inside painted parts of the tube fins when I painted the remaining parts of the rocket. There was still a little overspray that got onto the red parts. With a thick layer, you can sand the over spray off and then clear coat the whole thing to get the gloss back. If you don't have a heavy enough coating to be able to sand off the overspray, you'll have to mask the inside of the fins when you paint the rocket or mask the rocket and repaint the inside of the fins later. Both methods will work, but I just don't like having to use masking tape if I don't have to. 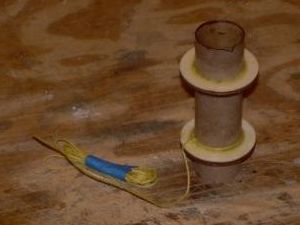 I painted the rocket first. I used a piece of rolled up paper to help hold and move the rocket during painting.

I also painted the lower part of the motor tube the same red as the inside of the tube fins. Once the paint was done, I installed the motor mount.

Post flight note: The destructions say the motor mount should be recessed 1/8 inch into the body tube, for aesthetics I assume. I mounted mine flush with the end of the BT. Considering the motor retention method used, I wish I had extended the tube about ¼ inch beyond the BT. 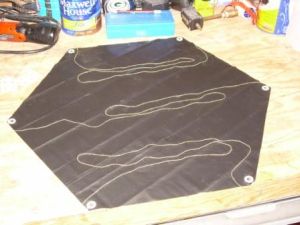 I assume the parachute is a purchased item that is included with the kit. The assembly instructions don't have any of the "funny" comments like the rest of the instructions. I varied from the instructions some what on the assembly of the parachute. It said to cut the shroud line into six equal parts, attach each to the parasheet and then tie the six together. I cut the shroud line into three equal lengths and attached three loops to the parasheet. I then pulled the three together and looped them through a snap swivel.

The final assembly before the flight instructions was to tape a strip of masking tape around the Kevlar® shock cord where it leaves the body tube to prevent zippers.

This was a fun build that was not overly difficult. The instructions were very good and the construction was straightforward. The only knock is the motor mount. Recessing it 1/8th inch may look better, but extending it ¼ inch would make it much easier the use the tape to retain the motors. As with any finishing, so much depends on the modeler and the modeler's methods and standards. Because of this, I find it difficult to rate the finishing on a kit. There were a lot of very good suggestions and instructions in how to construct the Kraken but not a lot of help on getting a "great" finish. That lack of finishing help is the only reason I didn't make it 5 of 5.

Flight and Recovery:
First of all, if this is your first rocket that doesn't have a motor retaining hook, don't worry. The destructions are very clear on how to install a 24mm Single Use motor. They also cover how to prep the remaining items for flight (e.g., wadding and parachute). As the destructions then say, "Go forth and go WHOOSH."

Flight 1 3/15/08 Battle Park Va. 3-8 mph winds, blue skies, and upper 50º. The first rocket to fly this day was the Kraken. The motor was a recommended C11-3. The boost was nice and straight to about 500ft. The deployment was right at apogee. The chute deployed great and had a perfect recovery. I was a little leery of the chute with the shroud lines the same length as the diameter of the parasheet. This is typical but I believe it causes a lot more twisted chutes then would happen if shrouds were 1½ to 2 time the parasheet diameter. I was pleasantly surprised, the decent was great with no twisting or spinning on the way down. 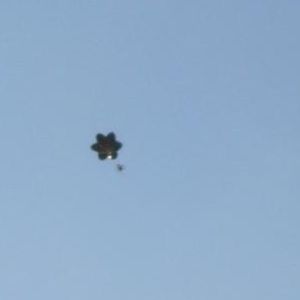 Flight 2 3/15/08 Battle Park Va. 10-12 mph winds. A quick turn around made this the third flight of the day. The motor was another recommended motor, a D12-5. This had a very straight boost to 800–900 feet. The deployment was exactly at apogee, a perfect deployment. The wind was up a little and the decent was again very good which meant a long walk.

Flight 3 3/15/08 Battle Park Va. 3 - 8 mph winds. I didn't have any of the recommended composite reloads, D15 or E15, so I went a little bigger. This motor was an E28-7T. This was probably too much motor for this tube fin rocket. It made 3 tight corkscrews as it flew under boost. It straightened out immediately after motor burnout. The altitude was 1200–1500 ft. The deployment was near apogee and was perfect. There was a long wait for it to come down but with the light winds, it landed less than 300 ft from the pad.

Summary:
The destructions say the Kraken will "fly beautifully on C11-3 and D12-5 Black Powder motors" and they are exactly correct. They also recommended the D15 and E15 composite motors. I'm sure these will fly just as well. If you don't mind the tight corkscrews or consider it too much risk of losing a tube fin or two, the Kraken really grabs some sky on the E28. I'm sure it will also survive and fly great on an F24. You're on your own with the F39. All in all, this is a great kit. It looks great, flies great, and generates a lot of interest from fellow rocketeers.

I am not normally a fan of tube rockets, but when I saw this one I couldn't wait to read a review. Thanks for the information and build tips on a great looking rocket!

About PemTech: I helped Layne edit the Kraken 'destruction manual', and I must say that it is laugh-out-loud funny in many places. ----- About this review: Excellent paint job. The yellow edging on the tube fins makes a great-looking kit look even better.

Is it me or are the tube fins on the kit a lot shorter than the picture on PemTech's website? If you look at the picture, those tube fins should be about 9 inches long (assuming the body tube is 18 inches long). Perhaps the angle of the picture is a bit deceiving? Either way, that won't stop me from getting one. Great job PemTech!

The answer to the tube fin enigma is : Yes and Yes The photos on the website are of the soon to be released 3" MPR version, which has a slightly different fin to BT ratio and the angle of the rocket in the picture makes the BT appear shorter. We ended up using the MPR version for the pictures because the LPR demo bird died a fiery death brought on by a motor CATO just before the release date.

I used a Estes D-E motor mount with a hook on my rocket it fits good and flew great!