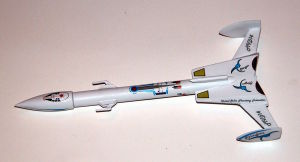 Brief:
Since Chan has done a second review of one of my reviews, I am giving a second review of the Stinger (I didn't know he had already submitted one when I wrote mine up). A couple of years ago I became interested in rockets that were built around the MicroMaxx engines from Quest. It actually wasn't so much flying them but more that the small size made for an interesting display model and they looked neat sitting on my desk at KSC. I initially purchased all of the scale Micromaxx kits from Aerospace Specialty Products back then so when I was at NARAM 50 this year I happened on FlisKits booth and decided to pick up three more. I have a preference for scale models and bought the micro Honest John which is their only scale model but also purchased the Stinger kit, a sci-fi type model that was recently released.

Construction:
These kits come in a small plastic bag and typically have a folded 8.5" x 11" instruction sheet. In the package were:

Building the model is typical of any standard model rocket albeit on a smaller scale. I basically followed the instruction sheet and started with the engine mount. The kit actually includes an engine block for the Micromaxx engine which was glued into the engine tube first. Then the two centering rings were glued onto the tube with the Kevlar® shock line tied around the forward centering ring. The next step was to cut the body tube to the specified length. I was rather surprised that FlisKits did not have the tube precut to the correct length but it was no big deal to do this. Once the engine mount glue was dry the engine mount was glued into the body tube. The engine protrudes a small amount from the body tube and this is used as a guide for the later installation of the basswood panels that attach to the back end of the rocket.

The next parts to be installed are the fins. These are laser cut from a small piece of basswood and are easily punched out to prepare for assembly. I always take the fins for my models at this time and first trim the edges with an X-Acto knife prior to sanding a rounded leading and trailing edge as appropriate. Because the fins are so thin, it was unnecessary to use the X-Acto knife to initially trim the edges. I simply took some medium grit sandpaper and my sanding block and rounded the edges as necessary. When this was done, I then gave the fins two coats of Coverite Balsarite balsa surfacer. I found this product at Tower Hobbies and have started using it instead of sanding sealer or Elmer's Wood Filler mixed in water. It brushes on easily and although it takes more coats than sanding sealer, it is cheaper and easier to sand. It also does not warp the wood as does the water based sealer.

The now smooth fins were then attached to the body tube per the instructions using medium CA glue. I usually attach the fins for my models with instant glue and then use epoxy to fillet and strengthen the joint, but with these micro models it is not necessary. After attaching all the fins I built up the paper shroud then slid and glued it into place. The wood end panels were then glued to the aft end of the shroud. The paper shroud envelopes the rear one third of the fuselage in an integrated simulated engine compartment to give the model the sci-fi appearance. The tip fins were then attached to the outer edge of the main fin. I then glued the launch lug on the standoff to the top of the rocket. Finally, I assembled the two forward laser assemblies from the basswood parts and glued them to opposite sides of the fuselage.

The final step was to finish the installation of the recovery system by pushing a small nail into the nose cone and gluing it into place with CA glue. The shock line previously attached to the engine mount was pulled out the front of the rocket and tied around the nail and CA glue was used to glue the line and knot securely to the nail. The streamer was then attached to the line with a piece of chrome mylar tape.

Finishing:
The now completely assembled model was then given two coats of Rustoleum gray auto primer. I have found this the best primer as it dries and cures relatively quickly when compared to Krylon and does not cause the sand paper to gum as badly. I sanded lightly between coats to get a smooth finish of the rocket. I then gave the model two coats of Krylon semi-gloss white paint. The Krylon gives the model a smooth finish and I then applied the decals to the rocket. The decals definitely make the model as without them it would be simply a white rocket although with an interesting body configuration. After allowing the decals to dry overnight I coated the entire model with Krylon clear to seal the decals.

Flight:
This model was only finished for a couple of days before I went out to fly it. Because this is a Micromaxx model I had no choice but to use the Micromaxx 1/8A engine. You are also basically locked into using their integrated launch system as inserting any type of normal igniter into the "lady finger" size engines would be difficult if not impossible. I had purchased a few packs of these engines from ASP sometime back as I thought they were going out of production. I took the rocket along with two others to a local park on a Sunday morning and with assistance from my wife launched the rocket using the Quest launcher. The launch process is a bit different and starts with unfolding and assembling the launcher. The igniter is a nichrome wire that is part of a plastic igniter assembly. The igniter is firmly pushed into a socket in the base of the launcher and the rocket is positioned on the launch rod so the igniter wire is in the nozzle. The integrated controller is strung out on the wire extension cord and the safety pin is inserted. This results in a red continuity light and a continuous beep to verify continuity and warn you prior to launch. At ignition the rocket took off and flew 80 to 100 feet into the sky.

Recovery:
At apogee the streamer ejected and the rocket managed to bounce off the hood of my car. However, since it was so light there was no damage to rocket or car at landing.

Summary:
This Micromaxx rocket is an interesting addition to my set of Micromaxx-based rockets. All my previous Micromaxx models had been scale models and this model makes an interesting and novel addition to my desk display. It will expand the theme to sci-fi models as well. The kit by FlisKits is a good quality kit and interesting design. The instructions were simple and easy to follow. The precut basswood parts made assembly easier and more exact. The decals went on with no problems and definitely made the model what it is. It does fly higher, as Jim told me it would when I purchased it, than the pre-made plastic models that Quest sells and which I despise! That is due to it weighing much less than the Quest models. That does mean they can't exactly be launched from the front yard as the Quest models can but also makes them more fun to fly. However, it will likely remain primarily a desk display model, but I will take them out and give them an occasional flight.