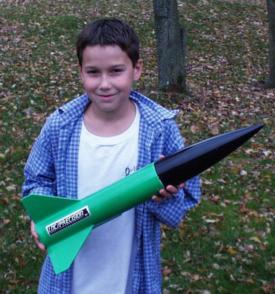 Construction:
All of the parts were contained in a plastic bag and they were all intact and high quality. The airframe had a very small spiral groove, the fins were top quality plywood, and the nose cone was sturdy plastic. The centering rings were also quality plywood. The parachute provided was hot pink in color and 15" diameter.

The instructions were contained on the back of the title card that was in the bag. There was not a great deal of detail in the instructions and for the simple design of the Onyx, it was not necessary. The parachute retention was contained in a small bag by itself and had its own instruction sheet. The airframe was pre-marked for the placement of the fins and the launch lug and assembly was straight forward and simple. This rocket is a good choice for someone that is new to mid-power rocketry. No surprises or unexpected troubles. The parts were all glued together using 2 ton epoxy, the instructions direct you to use epoxy throughout. After everything was glued, I applied healthy epoxy fillets to each fin and to the launch lug.

There is a note on the instruction card for the 24mm motors, that says they are to be used with LOC's MMA-1 adapter. This adapter is not included.

The recovery system has a nice hot pink rip stop nylon parachute with ample gage nylon leaders sewn to it, the 3/8" elastic shock cord is about 72" long and is secured by LOC's standard method of attachment. This entails a nylon string that is looped, tied, and then epoxied to the inside of the airframe. Then, the end of the shock cord is tied to the end of the loop that protrudes from the top. Just make sure to glue the nylon string down far enough to fit the nose cone it without interference. 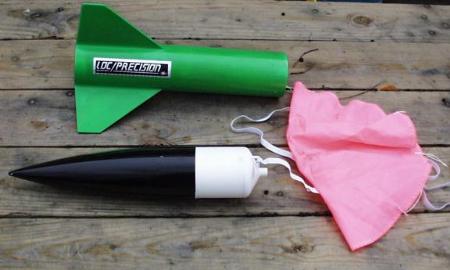 Finishing:
I asked my son how he wanted to have this one finished. For some strange reason, he wanted green. (go figure) Green it shall be I said, but it's going to be fluorescent green and not grass green or leaf green. After a few coats of sanding sealer followed by primer, I sprayed on some fluorescent green paint. Strange thing about that fluorescent paint, it doesn't finish very smooth. To compensate for that, I sanded the paint after each coat with 400 grit sandpaper. Once I was satisfied with the amount of paint, I coated the finished rocket with clear paint. I applied the LOC decal and was finished.

I got the self stick decal by a little bit of calling around. The kit did not originally come with any decals but, Magnum's website says that there is one included with every kit. I e-mailed them and was told that there should have been one and to call LOC to get one. Upon calling LOC I was told that they were discontinuing the decal so that all of their rockets didn't have a "predetermined" personality. But, they also told me that they had about a dozed or so left that they had just sent to Magnum. I e-mailed Magnum again and was told that he would mail a decal to me. I wanted the LOC decal because I wanted everyone to know that the quality product that they were looking at was, in fact, a LOC/Precision rocket. 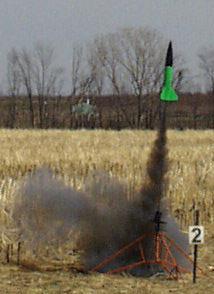 Flight:
Recommended motors are D12-3, E30-7, F50-9, G40-10. I chose to go somewhat bold with the first flight, so I used the F-50. There was not retention provided and I didn't take the opportunity to add anything. It is just as easy to use masking tape for motor retention sometimes. I just poured some parachute protection in and packed the chute in. It lifted off fast, real fast. Flew straight and true and went out of sight; well out of my sight because I'm nearsighted. But, when the chute popped, we followed it to the ground for a nice landing. No trouble at all.

At the Danville 99 launch we launched 3 of the Onyx's on H128 reloads. They held up just fine.

I bought this rocket because I like the stubby profile rockets. I am also trying to stay within the less than 1 lb, less than 1000' limitations. Personally, I am not a fan of surface mount fins, so I cut slots in the body tube and made identical fins, except tabbed to the motor mount. I, too, used epoxy everywhere (I won't trust glue on anything anymore). Instead of fussing with a smooth surface finish, I sprayed on a faux granite, which gave a marvelous rough green surface, and made its own fillets. It was pretty heavy stuff, and was used up pretty fast, so I painted the nose cone fire red. (I am not so sure that pursuing pure laminar flow is always the best idea, remember the dimpled golf ball). Anyhow, I stuck an EconoJet F20 in it, and it flew great. With the relatively small 'chute, it came down pretty close to the launch pad. Wrasp says it went to about 950' (not sure about that drag coefficient and the borderline weight). I expect many great flights out of this bird, because it is very sturdy, and very simple (what, me worry?). If it were my review, I'd give it about a 5. I liked the review. I found it very much like my experience with this rocket.

My 13 yr old son bought this kit and ask me to help/built this kit for him. I agree it is a neat,relatively inexpensive kit. Most of the parts fit great. The only exception was the fins. They were all the exact same size but the root edges had 2 noticeable curves in them. It took a fair amount of sanding on a block of 100 grit paper to fit them flush against the tube. I also do not like the surface mount to start with. I solved this by using PML's and Vaughn Bros. technique for minimum diameter rockets. I cut "dado" slots approx half way thru the tube. Tacked the fins on with medium viscosity CA and then filleted with epoxy. This works great and is very easy with the LOC tubing as opposed to phenolic. I had suspected that the chute was too small and after reading these reviews , it looks like I was correct. I would also like to see some decals -- maybe some stripes and an Onyx decals as shown in their photos of the rocket.

This is a great kit. It will fly on anything from small E's to big G's without any problems. The stock parachute needs to be upgraded, and a 22" or 24" will work fine. Load her up with a G80FW to give her a ride!

I loved this rocket an easy build and great flyer. The people i fly with always enjoyed seeing this one go up. Unfortunately it was destroyed when the g-38 I was flying it on exploded on the pad. I was sorry to see it go, I'm planing on building another one this time i might modify it to fly with 38 mm motors.

Want to have some fun? Try a cluster version of this kit. I bought a kit, and ordered a 3x24mm set of centering rings and a coupler tube. Cut three short 24mm motor tubes and epoxy into the front centering ring. Cut the fin slots through the body tube. Then epoxy the front centering ring (with long Kevlar® shock cord installed) into the body tube. Epoxy the coupler tube in the body tube. Epoxy in the aft centering ring. Now install the fins using plenty of epoxy in the slots, which attach the fins to the coupler tube. Cut off the bottom of the nosecone and add lead to the nose tip, using epoxy. Also add an eyebolt so you have an attachment point for the shock cord. My verion needed 4oz. of lead shot to ensure stability. I first flew this rocket on 3 D12-5 motors to about 500 feet. The I installed 3 E30-7 motors and it blew me away, hissing skyward to about 1800 feet. I plan to fly it on 3 F21-8 motors for a high power flight (165Ns).

I flew my ONYX on an F-21 Econojet motor and she tracked straight and true. However, when deployment occurred the shock cord split and the parachute disappeared. The nosecone separated from the body and the two fell separately to earth. Upon impact only minor scuffing was observed. I wanted to share that the fins remained firmly attached to the body, probably because of my using epoxy rivets during construction. I love this tough little rocket.