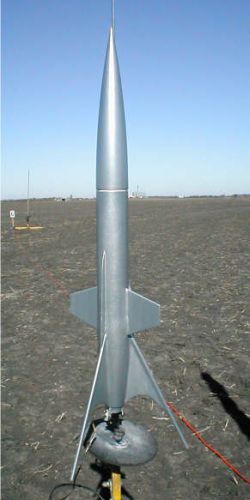 Brief:
Wow! This is a great kit. Layne has done another superb job of capturing the magic of Sci-Fi in this 2.5" diameter 29mm rocket. Colonel Carruthers would be as proud to see this rocket as he would the rescue ship. I was a little worried about the dowels hanging off the back, but following Layne's instructions for installation results in a solid fin unit that can take the abuse. It's another head turner from Pemberton Technologies fit for a flight to Mars!

As Pem-Tech advises on the website, you should be prepared to "build" your rocket, however, the main parts are pre-cut so it really isn't anything extremely difficult unless you're squeamish about cutting out fin slots. All of the parts are high quality. As with both of his kits I've built, I am most impressed with how all the parts come together to create a beautiful rocket.

The kit arrived with the parts packaged in a very sturdy plastic bag and secured inside the shipping box. The included CD is a very nice touch. Besides the printed instructions, the CD has the instructions in both PDF and Word files, the RockSim file with a link to Apogee's site to download the trial version, plus a lot more. The CD is useful for a couple of very practical reasons. First, if you get a little wild with the CA and glue a couple pages together, you can reprint the particular page. Second, after building my rocket I weighed it and measured out the CG, then modified the RockSim file to include the specifics of my build to get a better idea of how my rocket would perform. Now that's nice! The instructions are laid out very logically and fully illustrated and of course are written with Layne's well practiced humor interlaced throughout to keep the build lively.

Be sure to read the instructions carefully regarding the marking of the alignment lines on the body tube and tail cone using the provided templates. This is very important in aligning the fins and wings properly. Once that was done, I used a Dremel to cut the slots for the fin and wing tabs. The tail cone is really thick, so the Dremel was very handy in completing that step. After test fitting everything with the motor mount set in, I sanded down the tabs flush with the motor mount and sanded the bases of the fins and wings so they were flush with the exterior of the tail cone and tube. I also measured out and cut some ¼" dowels (not provided) to fit alongside the fin tabs for strength, both in the tail cone and in the body tube. Layne suggests filling the tail cavity with expanding foam, but I bypassed that since I installed the dowels. The kit is designed in mind with using friction fit for motor retention. While somewhat disturbing the sweet lines of the kit, I nevertheless decided to install three lengths of all thread (also not provided) in the tail cone to provide for positive motor retention. There was just enough room for them. With that done, I filled the lines in the body tube and then sanded everything inside and out. After re-checking the parts fit, I was ready for the epoxy.

Epoxy was drizzled in around the motor mount, fins, and internal dowels, filling the bottom of the tail cone. I moved on to getting the other parts ready while the epoxy set up. The parachute attachment point on the nose cone was very solid so I didn't bother installing an eyebolt into the nose cone. I installed the nose cone weights into the nose cone with epoxy and then moved on to cutting out the three fin spines from the provided basswood and rounded the leading edges. Next, I measured the angles for the fin dowels and cut them to fit along the fins and flush against the tail cone with the other ends cut to allow the rocket to sit flat on the surface once installed.

Then I tacked the dowels onto the fins with CA, epoxied in the wings, and installed the centering ring and body tube onto the tail cone. I used yellow glue to put the fin spines on, angle cut the kraft launch lug in half and installed it onto the tube with a healthy measure of J-B Weld. I love the look of the launch lugs. After everything had dried, I put epoxy fillets on all the joints. Once that had dried, I created some hefty fillets with J-B Weld on the dowel/fin joints.

I substituted some heavier duty Kevlar® for the shock cord mount and installed it with J-B Weld. CA was wicked into the forward edge of the body tube to prevent abrasion from the Kevlar®. I also tied a knot in the Kevlar® right at the point that it exited the tube to provide a broader base there. A loop was tied at the end of the Kevlar® to attach the nylon shock cord, which was then tied to the loop on the nose cone. A bright orange 24" heavy duty nylon parachute with nylon shrouds is provided to bring the M2 safely back to the ground.

Finishing:
Finishing the rocket was standard except there were a lot of joints to sand. After sanding everything with 220 grit, I completed final sanding with 400 grit. I then sprayed on an undercoat of Kilz to seal off the epoxy and sanded with 320 grit. Sprayed on a coat of Krylon primer and then spot sanded, sprayed another coat of Krylon primer and then sanded with 400 grit. The entire rocket was painted silver using a Rustoleum metallic spray. After that dried, I sanded with 600 grit and then applied the final coat of silver. There are no decals to apply so next I applied a couple of coats of Future Floor Wax to protect the finish and improve the shine. It looks great! 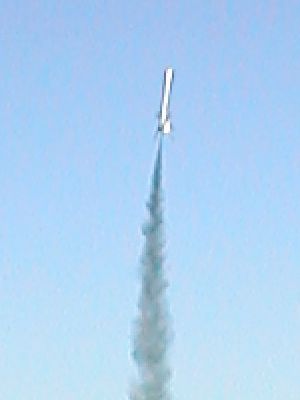 Flight:
Our October launch was rained out, so I had to wait until November to fly the M2. It was a beautiful launch weekend though and flying from the DARS Windom field, a huge plowed field that often sports flights to 16,000 feet or more, is always nice. It was a little cool, but the skies were clear blue, winds were light but gusting occasionally, and the ground was soft. Sliding the M2 over the ¼" launch rod, I noticed I needed something to hold it further up from the bottom of the pad. I put tape on the launch rod below the launch lugs at a position that would keep the dowels off the pad. I had decided to use a leftover Roadrunner single use G60-7R, rather than use the reload motors I had. It was an excellent choice. The rocket took off with authority but there was some initial weathercocking just as it left the pad. Consensus was that a gust of wind caught it right as it left the rod as it was straight up after that. It was a very good flight.

Recovery:
The chute popped just after apogee and deployed without problem. The chute is perfect for this rocket. The dowels hit first but with the chute leading the body there was no problem with those. However, when the nose cone hit, evidently the jar shook loose the nose weight I had epoxied into the nose. I sure was glad that it didn't come loose during flight. I will drill a hole through the nose cone, epoxy in a ¼" dowel and refinish it. That should hold it for future flights.

Summary:
The M2 was a very straightforward build but does take a fair amount of time to complete. I do recommend taking the time to measure out the angles on the fin dowels. They look really nice when done properly. The instructions are very easy to follow and logically arranged. The M2 is another very cool rocket from Pem-Tech that looks great on the pad or in the air!

CONs: There really aren't any in my opinion. I made some changes, but those were more along the lines of personal preference.

Roadrunner motors are awesome for this rocket! The G64 is too cool, as well.