Brief:
Fliskits sells a great line of kits and they also give some good ones away. You can now download for free, 3 Micro Maxx versions of the 13mm flying saucers they sell in their Triple Threat kit. The downloads are Acrobat Portable Document Files or PDFs on their "Free Stuff" page. A free PDF reader can be downloaded and installed from the Adobe website. Each of the 3 saucers is named for a character in Greek mythology. The smallest, round saucer is named Persephone (Per-sef-fone-knee), daughter of Zeus and wife of Hades. She has 3 fins and 2 circular shrouds and was the easiest to build. The next to be built was the five-sided Athena, Goddess of civilized life. Finally the biggest and most complex is the 6 sided Odysseus, Hero of the Trojan War and King of Ancient Ithica (present-day Macedonia). 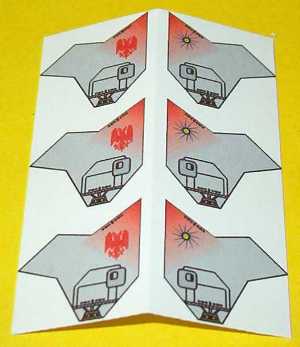 Construction:
The instructions for all the saucers are excellent. I found only one mistake, Odysseus is called the first ever Pentagon Flying Saucer model when it is in fact hexagonal. The instructions suggest 3 possible substrates to print the patterns on, self-adhesive label paper, photo paper or stiff card stock. I chose the latter, card stock, because this is what I had on hand and it is the cheapest. I get 150 sheet of White, 110 lb Geogria-Pacific card stock at Wal-Mart for $4.97 + tax. I printed each, one page PDF on my Hewlett Packard Deskjet 932 without any need to alter the settings to fit it to the page. The details on these kits is really great and my printer and paper don't do them justice..

I built all three kits in the same manner. I started with the Body Tube Wrap. I cut along the top, bottom and right edges using an Exacto #11 knife with a fresh blade. I left a 1/8 inch, glue tab on the left side. I wrapped the Body Tube Wrap tightly around a spent Micro Maxx Motor and glued it together using a very small amount of Elmer's Glue-All (white glue) spread out evenly. I didn't have any 1/32 inch balsa for the fins but decided that 2 layers of card stock should be strong enough and stiff enough without it. I lightly scored a vertical line down the exact middle of the gap between of the right and left fin sets. I then made a straight cut along the tips of the fins and the top and bottom and folded along the scored line. I spread a small amount of Elmer's on the back side of the fins and then folded the two halves flat so that when I cut out the right side fins the left side fins would be on the back perfectly lined up. I used a stainless steel ruler and #11 knife anywhere there were straight lines to cut and freehand the remaining cuts with the #11 knife. 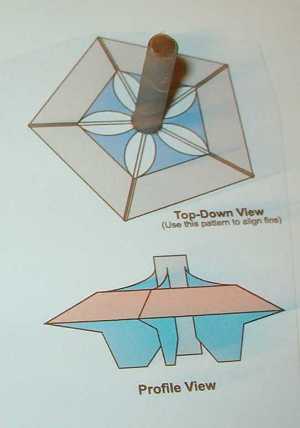 The fin alignment guide very helpful for getting the fins pointed in the right direction and it took very little glue to stick them in place on the Body Tube Wrap. Once the fins were in place the Shrouds went on top of them and were held in place with a drop of glue on each fin. I did not add the wire Antenna to any of the rockets because I didn't have the necessary wire and I don't think the Antenna are necessary for such light models. Persephone and Athena only weigh one gram and Odysseus weighs 2 grams. This include the extra engine block the I made for each out of a 1/8 inch by 2 inch piece of card stock rolled into a tight spiral and glued into the very top of the Body Tube Wrap. The instructions left to the builder what to do for initial guidance. I chose a launch lug made out of a 3/8 inch long piece of a plastic-handled cotton swab so that it could be launched off the standard Micro Maxx launcher rather than a rail or tower (See instructions). I secured the launch lug with CA glue.

Finishing:
Since the models are already decorated all I had to do to finish them was apply a light coat of clear enamel to protect the card stock and ink from moisture.

Flight:
My test flight were far from easy as you will see. It was around noon, sunny, humid, windless and 100 degrees in Texas. I prepped each rocket by wrapping Micro Maxx II (P/N 5663) motors with one wrap of a 1/4 inch-wide piece masking tape.

Persephone flew like she was on her way to Mount Olympus. At least 50 feet up, straight and level with a gentle end-over-end tumble on descent. I think the Antenna wire would have made it fall faster and with a very unladylike head-down attitude. 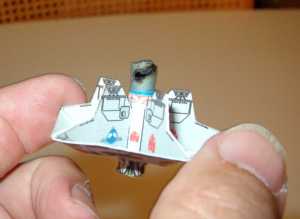 The next to fly was Athena and her flight was anything but civilized. She was more like her warlike character. The nozzle popped out the back of the motor with a loud, firecracker-like bang. I was thinking, "That's all I need right now is the neighbors calling the police because they think I'm setting off fireworks in the city limits." The rocket might have gotten 5 feet up. The hero of the Trojan War, Odysseus followed Athena's lead and also CATOed in the same way.

I really wanted to see how these rockets were supposed to fly so I loaded Athena and Odysseus with fresh motors and flew each again. Athena did an instant replay of the first flight with the motor blowing out the nozzle. Odysseus however showed what a real hero he was and when 50 feet, arrow-straight up. If you saw the final, climatic scene in the movie "Ulysses" (Latin for Odysseus) with Kirk Douglas you know just how straight and fast it went. It descended with the same gentle, end of end tumble Persephone made.

Once more into the breach, I loaded another motor from the same package into Athena and she spit the nozzle again but managed about 10 feet this time. On the 4th try the motor blew a hole out the side just above the nozzle and the saucer cartwheeled 3 feet above the ground. Try number 5, the motor burned through the side at the nozzle and also through of the middle of the body tube. It scorched the inside of the shroud. The rocket never left the pad on this try, it just spun around the rod and bent it. Try number 6 saw a repeat of the first and second tries with the nozzle popping out with a bang and the saucer lifting up 5 feet. Only this time it also blew the engine block out of the forward end. I am starting to wonder if the shape of the rocket, a pentagram, doesn't have something to do with the problems I am having. The seventh try was finally the charm. I dug out a Micro Maxx I motor (P/N 5662) from the bottom of my range box and the rest is history. Athena ascended 50 feet or more into the heavens, spit out the motor at apogee and descended to Earth as gently a a flower petal.

Recovery:
It don't get no simpler that this. Tumble, featherweight or aerobrake recovery by any other name would smell as sweet.

Summary:
These rockets are great flyers, CATOs not withstanding and are well worth the money and time it takes to assemble them.