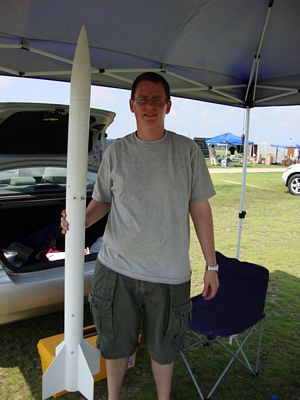 Brief:
The LOC/Precision Iris is a 3" diameter single stage rocket. It can be built as 1/4 size sport scale Iris rocket. Recovery is via a 36" parachute. I modified it to use electronics for dual deployment.

Modifications:
I built everything stock except for the deployment/recovery method. I converted the coupler to an electronics bay. I built this by adding another bulk plate assembly and a coupler tube stiffener, also purchased from LOC. I cut the stiffener down so that each end was recessed 1/4" from the edge. This allowed room for the bulk plates to fit in. I drilled two matching holes in each bulk plate for #10-20 threaded rod to go through. I put wing nuts on the ends of the threaded rod to pull the bulk plates tight against the stiffener tube. The electronics sled had a 1/4" tube glued to it that slid onto one of the pieces of threaded rod. (I should have made it go over both pieces though.) I cut a 3/4" piece of body tube and glued it in the middle of the coupler. This allowed me to permanently mount the arming switch, which from Newton's 3rd Rocketry. It was also a good place for the static port hole. This e-bay design, using the included coupler had plenty of room for my Perfectflite HiAlt45K.

I used some tubular nylon that I already had for both sections. The lower half attached to a 1/4" eye-bolt screwed into the motor's forward closure. 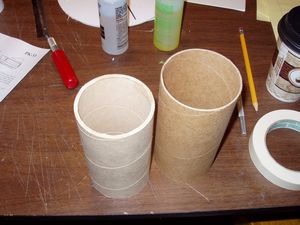 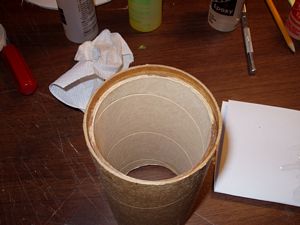 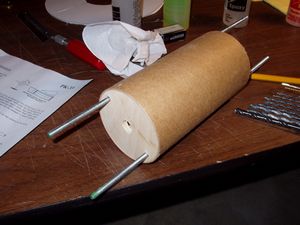 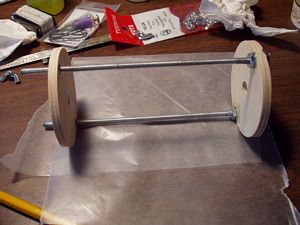 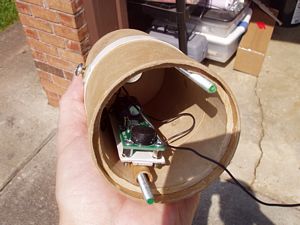 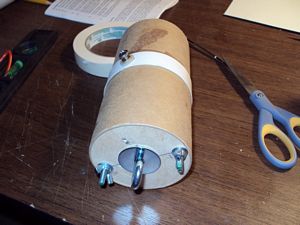 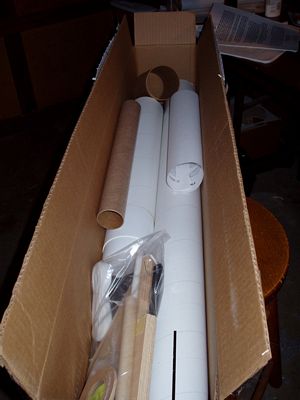 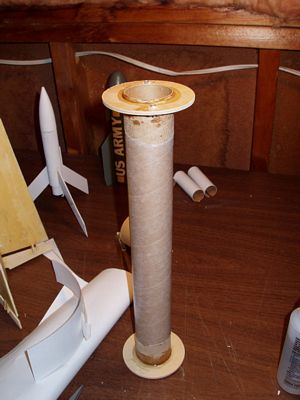 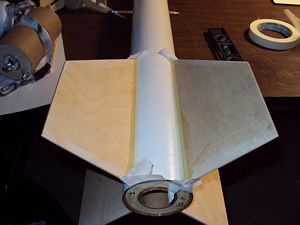 Construction:
The box contained 2 sections of 3" diameter body tube. One of them was pre-slotted. There were two 1/8" 5-ply centering rings, and four 1/8" 5-ply fins. The rest of the parts included a 38mm motor mount tube, elastic shock cord, 36" parachute, plastic nose cone, 3" tube coupler, and a bulk plate assembly.

Finishing:
I didn't put much effort into finishing. The decals that came with it appeared to be homemade and sprayed with clear coat. I decided not to use them and originally planned to paint it close to one of the paint schemes of the real Iris. I didn't do any finishing work on the tubes or fins other than a little sanding. I applied two coats of white primer and two coats of white gloss paint. This was all I could get done before the launch. I had planned to do more later.

Flight:
Both flights were fast and straight. Each flight was was powered by a J motor using DPS SRB propellant. The first flight reached an altitude of 4212 feet. The rocket was destroyed on the second flight. 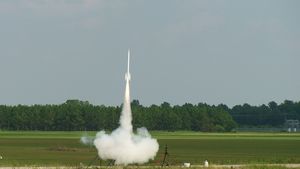 Recovery:
Recovery for the first flight was perfect. At apogee the first charge fired, separating the two main sections which were tethered by 25 feet of tubular nylon. The second charge ejected the parachute at 400 feet.

The second flight suffered a failure of some sort in the electronics. I think it was more my failure in how I mounted the electronics and not the manufacturer. Neither charge fired, and I suspect there was a power disconnect. I was careless in how I mounted the battery and think it might have come loose or jarred the altimeter. I also should have mounted the sled over both pieces of threaded rod to keep it from rotating. I had added some foam underneath the sled but don't think it helped much. Almost everything was destroyed when it hit the ground. The parachute, motor hardware and fins were OK. The rest of the rocket was unrepairable as well as the altimeter and Beeline transmitter. 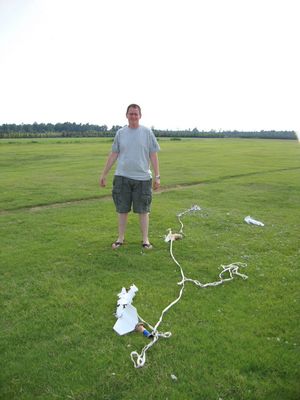 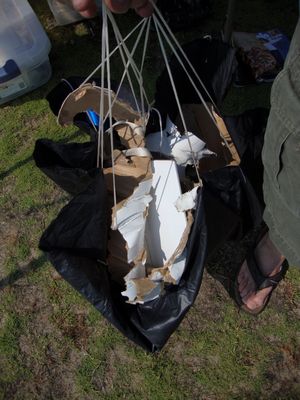 Summary:
PROs: I think the LOC/Precision Isis is a great rocket. I would like to build another one some day. The parts were extremely good quality. The instructions were easy to follow. It flew great. Also, because of the dimensions, I had the option to make a sport-scale Iris.

CONs: The only issue I found is the pre-made slots did not appear to be perfectly spaced from one another. I was able to work around this.

I've drawn up some plans to make a scratch build version of a Russian missile. It'll be a base rocket built using some IRIS parts (or similar) then with the purchase of some centering rings, 4 inch tube, and a 16.6 nose it'll grow about 2.5 more feet. Maybe if all goes well I'll post up some building shots and some b4/after flight shots.