As with most every clone project, this one started by pulling the plans from Jim Z’s site. I did find one error though, there was only one fin pattern sheet in the plans set and it appears as though this is for the booster only. I had to scale down a second set of fins for the sustainer. Based on measuring the decals, I estimated this to be about 70% of the size of the booster.

The parts list includes fairly common and easily obtained materials, although it's fairly extensive. I managed to scrounge up all of the parts from my growing collection of spare parts except for the waterslide decals, which I ordered from Jim Z since he's kind enough to make these plans available to the public.

The Estes catalog classifies this accurately as a skill level 3 kit. You'll need to be able to trace and cut balsa fins, as well as build a two-stage rocket and small glider. Construction starts with the basic single-stage model, consisting of a standard 18mm motor mount assembly, though with the aft centering ring a bit more forward than usual. This is allows room for the booster. The standard kit plans call for a tri-fold paper shock cord mount but I modernized mine a bit by attaching Kevlar® to the centering ring. The finished subassembly is then glued into the sustainer body tube. 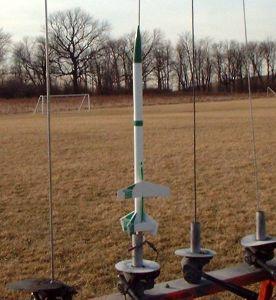 Next comes the tube marking. If you don't have an Estes tube marking guide, splurge for the $5 and pick one up. They make measuring and marking of tubes a breeze, and also have a neat fin alignment jig to make sure your fins are perpendicular to the tube. After marking the tube, it’s time to bond the four fins. Normally before bonding, though, I fill in the tube spirals using watered-down Elmer’s Fill n Finish. This is much easier without the fins in the way.

I tacked on the fins with thick CA then applied fillets using yellow glue. Since this is going to be a two-stager, I went with a second round of fillets for added strength as well. Attaching the launch lug and 12" chute completes the construction of the sustainer.

Construction then moves on to the payload section. The payload consists of a 5.5" BT-50 tube, a balsa block, and a screw eye. Nothing tricky about this. The nose cone is inserted but not glued into the payload. Just make sure it’s a very tight fit or you'll never see it again.

The glider assembly is made from 1/16" balsa and includes some very tricky cuts. The complexity is probably to allow for the glider to ride as a parasite without adding the added drag of a pop pod assembly to the sustainer. While it might have been innovative in the 80’s, I found the glider design pretty feeble and inefficient and don't expect very long glides out of it.

The glider fuselage is a 3-piece assembly with the middle piece creating room for nose weight and projecting a small mount for the hook. Wings are mounted with a ¾" dihedral under each wing and then attached to the fuselage assembly. Add a rudder, a tail, and a tiny dowel (I used a toothpick), and the glider’s ready for trimming. The instructions suggest painting this white, with green trim. I followed that suggestion, which looks pretty good, though this certainly added a lot of weight to the glider. I found that in calm winds, my glider needed a small washer of nose weight (about half a gram). Worth noting is that there is no permanent attachment on the rocket for the glider--the instructions call for using masking tape to attach a small length of launch lug to hold the glider in place.

The last aspect of construction is the booster. This consists of an standard 18mm motor tube (NOTE: it is cut to 2 ¼", not the usual 2 ¾") , 20-50 centering rings, and a BT-50 tube coupler subassembly, which is then inserted into a 2-3/4" BT-50 body tube. The larger fins (the "standard" ones in the plans) are mounted in alignment with the fins on the sustainer. I used a ruler and clothes pins to keep my fins perfectly aligned.

Finishing:
Finishing is fairly easy on this one, as the entire rocket is white, and the nose cone gets painted fluorescent green. After trying Krylon's OSHA green, I found that the decals were a darker green, so I went with the basic Krylon hunter green. The waterslide decals make a great accent trim for this and the finished product is very appealing.

Flight:
As mentioned previously, there are a total of 8 different flight options for this. The combinations are achieved by adding payload, glider, and/or booster to the basic sustainer. The options are single stage sustainer, 1-stage payload, 1-stage sustainer/glider, 1-stage payload/glider, 2-stage glider, and 2-stage payload/glider. As tiny and fragile as the glider is, I can't imaging sending it up there on a 2-stage flight. Even if it holds up to the thrust, it's likely to separate when the second stage kicks in.

The rocket gods were smiling on me on flight day, as the weather was sunny, slight breeze, and temperatures north of 50º. Flight #1 was a straight single-stage with the payloader, using a C6-5. It flew straight up over 1000 feet, deployed perfectly, and landed gently about 50 yards from the pad. I did a quick reload of dog barf and repacked the chute and it was ready for the two-stage configuration. I chose to back down on the thrust though, going with a B6-0 staged to an A8-3. Everything lit fine, though the separation led to a slightly angled flight on the sustainer and the deployment was definitely a bit too early. Still, everything came back in great shape and I was ready for a third configuration: this time with the parasite glider. For the glider version, I went with a B4-2. I held true to the original design, taping a launch lug to hold the glider rather than gluing one on permanently. The wind had picked up at this point, and was a steady 3-5 mph. The tiny glider kept flapping on the pad, and I was sure it would separate under boost. Once the motor lit, glider and rocket flew straight as an arrow with a perfectly loop-free path. The 2-second delay was early but enabled the glider to separate without any interference from the rocket. While the rocket floated down under chute, the glider followed a tight circular path (roughly 15-20 yards in diameter) and held up very well. It stayed up a good 20-30 seconds longer than the rocket and was recovered intact.

Summary:
I was very impressed with this rocket. I'm really surprised we don't see more of these floating around. This bird can fly in just about any weather conditions, and the variety of configurations make it hold interest a bit longer than a basic modroc. The glider, while not terribly high performance, really flew quite well and is a good entry into the world of boost gliders. Even after flying three quick flights, I'm plotting the next few steps. I can see loading an altimeter in the payload, and who knows...I might even try a two-staged boost glider.