Brief:
This is a review of a limited production upscale kit that was produced by my friend Gordon Agnello. This 24mm upscale of the Estes Astron Constellation Model Rocket is very accurate and I was lucky enough to acquire one of the two 'hardwood' versions from the production line. Gordon has produced some very cool kits in the past and this one is no different. Kudo's go out to JimZ, who cast the resin teardrops for the fin tips - they really added to the model.

Construction:
As previously mentioned, this is an upscale of the Astron Constellation, a 24mm version that was complete with ply fins (only two made like this, the rest had balsa) and basswood nosecone. This is a payloader rocket that stands about 24" tall and the sky is the limit on motor selection. The motor mount was a aluminum film lined heavy duty LOC type 24mm mount. The plastic payload section was also heavy duty and came with brass screws for mounting. Also, the bulkhead coupler was made from basswood and shaped to the correct size. Even the CRs were ply - a very nice touch. Parachute was a 18" mylar supplied by Thrustline Aerospace and the kit also included a Kevlar®/nylon shock cord combo. All parts were top quality and the nosecone especially was very cool - what really impressed me were the decals, upscaled and printed for Gordy by JimZ - top notch all the way! 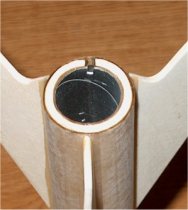 I began by building the motor mount assembly per the instructions. It went well and was mounted inside the bodytube before I knew it. The fins were designed as 'thru-the-wall' and were fitted to the model. A CR caps the top and bottom of the fins for strength, but I made a third CR from 1/8" ply to cap the bottom of the model flush, something I do to all my models and it prevents the bottom 'lip' from being dented. Once the fins were inserted, I ran a bead of epoxy for fillets on each fin. The bottom CR was sealed with epoxy and the teardrop tips from JimZ were added to the fins. Finally, the nosecone was sealed using CA glue and everything was sanded, then fitted. The kit went together amazingly fast and looked pretty good so far - now it was time to finish. 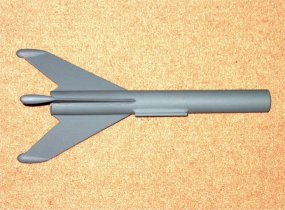 I began by applying several coats of primer to the nosecone, finishing with Krylon Gray primer as the base. I was going to use Krylon Red for color on the nosecone to keep it stock, but wanted the tint a bit darker, hence I left the basecoat primer dark.

The model was primed, then wetsanded starting with 320 grit and finishing with 600 grit. Some filler was needed around the fin tips and fillets, but this was easily applied and the model was final sanded and tac-ed. White Krylon Glossy paint was used for the bodytube and fins, following that stock look. I waited a few day after application, then masked off the model and painted one fin satin black. IT looked very cool and I decided that, even with all hose decals, I was going to use just enough to add character. Once the decals were applied, I used Krylon clearcoat to seal the bodytube and nosecone., The model was final assembled, to include shock cord attachment and parachute attachment - I was very pleased with how it looked. 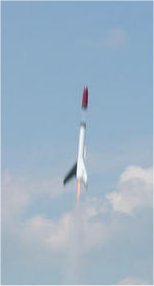 The model weighed in at 6oz empty - which would allow me to still use the Estes E9 motors, and I chose an E9-6 for the first flight. My son and I attended NARAM 45 in Evansville, Indiana and this is where the Astron would fly. The model was prepped using tissue for the chute to keep the launch nostalgic. I filled out the flight card and it was placed on the pad. When the LCO counted down and pressed the button, the Constellation left the pad in a hurry and seemed to fly forever. Man, I really want to test it with an RMS now!

The Constellation reached apogee and had a perfect ejection; it then floated safely to the ground without incident, even though the chute had tangled a bit on the way down. Estimated altitude was around 1000 feet and it was a very good flight. Upon examination, the rocket came out of it without a scratch and I look forward to many more launches with this sturdy bird. Then came the surprise.

Vern Estes and his wife Gleda attended the NARAM launch later in the week and I was honored when he signed this upscaled Astron Constellation for my son and I...it was one of the highpoints of our trip. The signature was clearcoated and I plan on flying it again this next weekend rather than shelving it. The kit is so sturdy, it could handle several landings without chute and still survive. 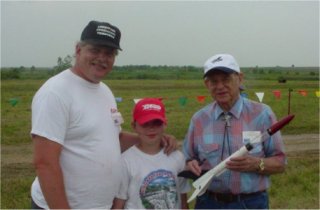 Summary:
This limited production upscale of the Estes Astron Constellation payloader rocket K-35 is one excellent model. Top quality components went into its design, from the quality of tubing and wood, to the excellent set (two pages) of decals. Gordy has outdone himself and I was glad to have purchased one. If you ever see them available , grab one fast as you will not be disappointed. The Constellation builds fast and stout, flies like a dream and has a touch of that nostalgic era of rocketry many of us remember from our youth, which makes it a must for the hangar!