Brief:
This is a boost glider that literally takes minutes to build and isn't all that expensive.

Construction:
The kit comes with a body tube for the engine and pop pod recovery device (streamer), three main body pieces, balsa nose cone, and clay for weighting one fin down to enable it to circle around your launch site instead of taking off a couple miles down wind.

The directions were extremely easy to follow and the entire kit was insanely easy to put together. You almost didn't need the instructions. All of the balsa pieces are laser cut and look very sharp. It's just like putting together a jigsaw puzzle. All I used to put it together was CA glue and some markers to add some of my own flavor.

PROs are that all parts are well cut, easy instructions, and a very basic design so anyone of any ability could piece it together in no time. There aren't any CONs other than that it is pretty delicate. I wouldn't even recommend sanding the balsa at all.

Finishing:
NO PAINT! It adds way too much weight. This is just a little rocket! 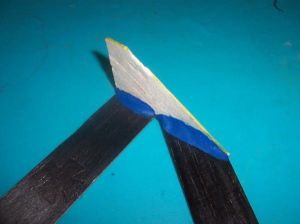 Flight:
Well, before you fly it you really don't know how much clay to use to prevent it from taking off down wind. My first flight I thought was set up perfectly. I had it balanced just like the instructions said but it still flew at least 250 yards over a fence and into a baseball field nearby. And that was only on a 1/2A! I got it back and of course added more weight to the fin. The second flight proved to be still too light on the clay so I added more again. While testing it out by just throwing it gently to see how well it turns, it landed in the grass and snapped just behind the nose area which had to be glued back together. It flew again and was much better, however, it really didn't catch the wind very well. It actually fell into a flat spin for a good 4-5 seconds before it actually started flying. Almost like it was too light! I had really mixed feelings about this kit at this point. It got to be way more frustrating than I thought it would be.

Recovery:
The pop pod streamer was constantly tangling but the tube/nose cone was light enough to safely tumble by itself if it had to. And of course there was the whole glide recovery thing too. That's another job all together.

Summary:
It was not too bad to this point, but that's about as good as it is going to get. The customer service part was absolutely downright terrible--and I don't mean from the hobby shop I bought it from--I mean Edmonds, the manufacturer! I ordered two of these kits 2 weeks before Christmas in hopes of giving one each to my daughter and father so they could build and fly them together while we were home on vacation. Well, both packages were missing the main body tube. How can you miss packing such a thing as the body tubes in both packages? To make a longer story shorter, I didn't get the replacement pieces until nearly March. That's right, March! The online hobby shop I ordered it from no longer carries Edmonds supplies either. I don't think I'd waste my time with Edmonds gliders anymore anyway. They might be easy and convenient to build, but they have absolutely zero durability. It broke twice in the same spot from just me tossing it to see if it glides.

Spread newspaper on your building table when assembling this model. That way, if you do glue it to something, it's the paper (easily removed) instead of the table. Rob Edmonds recommends not painting the glider to save weight, so I didn't. I did, however color the booster with markers. I'm glad I did, because a booster this small is hard to spot even in short grass. I colored it bright red, and had no trouble finding it. This was also my first boost glider. The directions were very easy to follow. Per directions, I did not sand the balsa, and I got a 60 second glide on my first flight.

instead of newspaper, i used waxed paper. this worked well, as it would come right off. leave the little red plastic thing that holds the rear piece on right on for 12 hours at least.

I built a Deltie in January. Flew it Feb. 21'st , waited until late afternoon when the wind died down. My 6 year old son pushed the launch button on the first launch with a 1/2A4-3. Great boost, we got so excited trying to time the glider we lost site of the booster, and when I glanced at the stop watch and looked back up the Deltie glider was gone too! My son had picked up an over-flying light plane and thought it was the Deltie! After about 20+ minutes searching the big cow field we found the glider due to my son's imaginative magic marker color scheme! Then on the walk back to the pad we stumbled upon the booster! (must be living right) Two more flights thiw evening with the same engine. The second one gave a 40+ second glide in beautiful slow circles over the field. On the third flight something happened upon ejection and the booster and glider appeared to be coming down together, but in a second or two they separated with the glider pointed straight down! It quickly swooped to nice level flight and resumed it's beautiful big circles for a good 32 second glide! Fun~! PS: Deltie Thunder under construction ...stay tuned~!