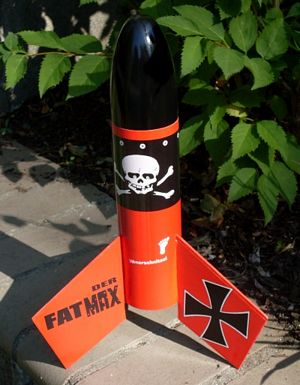 Brief:
The Der Fat Max is another Goony Retro-Bash plan set from Excelsior Rocketry. While it might not be the typical size of a Goony, it sure looks and feels Goony to me. As with the other Goony Retro-Bash rockets available from Excelsior, this is a kit-bash where you get receive the plan set, decals, and fin pattern. For this rocket you need to supply a Fat Boy kit and balsa for the fins. I had purchased the now out of production (OOP) Fat Boy kit while there were still some on the hooks at my local hobby store. Since you only need the nose cone, body tube, and motor mount, it should not be too hard to get the parts individually for this build. I had also purchased the Der Fat Max plan set materials when Fred "Phred" Talasco still owned Excelsior Rocketry. I have always received great service from Excelsior and now that Gordon "sandman" Agnello has taken over operations, I am sure that the great service will continue.

Construction:
As stated above, you only receive the plan set with fin patterns for the Der Fat Max. Because of the size of the rocket, the decal sheet is much larger than the other Goony decals which is why it cost three dollars more I suppose. About the only thing I would have like to seen on the decal sheet would have been the use of Goony eyes with the skull and crossbones. You do get plenty of decals that include a tube wrap for a BT-80. I do find it humorous that the one page plan set from Excelsior states that the builder needs to supply a Fat Max kit instead of a Fat Boy kit. The builder needs to provide a 3/32" balsa sheet for the fins.

You construct the rocket using the Fat Boy plans. The only difference is with the fins. You use the fin pattern supplied to you from Excelsior and cut the fins from the balsa sheet. The only other change would be the color scheme to keep with the Der Red Max rocket theme. Because of the size of the fins I decided to paper the fins to both strengthen them and to save on time in the finishing process. 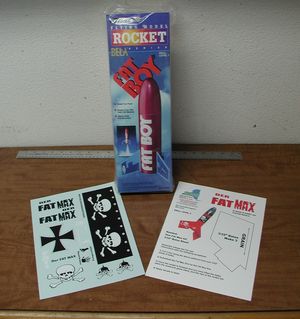 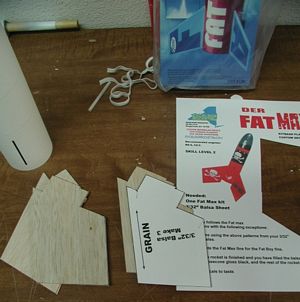 Finishing:
To paint the rocket, I used 2 coats of Kilz white primer, lightly sanding between coats. Then I separated the nose cone from the rocket and painted it gloss black. I painted the rest of the rocket using Rustoleum Red. Each of these received 2 coats with no sanding due to laziness. I am happy enough with the finished result.

While waiting for the rocket to thoroughly dry, I coated the decals with Testor's Gloss Coat #1261. This gives the decals some added strength when applying them to the rocket. The only issue I encountered was on the full body wrap. I mounted the launch lug where directed on the Fat Boy plans. The full body wrap is at this same position. When I was trying to cut the decal for the launch lug, I ended up tearing the decal. My suggestion would be to lower the position of the launch lug so that the top is where the bottom would normally be. This should have no affect on launching the rocket because of the larger fins on the Der Fat Max. Once the decals were on and dry, I coated the rocket with Future Floor Wax.

Flight:
The recommend engines that listed on the Der Fat Max plan set are a B6-4 and C6-5. This doesn't make sense to me since the recommended engines for a Fat Boy are a B4-2, B6-2, or C6-3. My Der Fat Max weighted in at 3.9 ounces which is 0.5 ounces heavier than my finished Fat Boy. I decided to play it safe and used a C6-3 for the first flight. This was the right choice. The rocket came off the launch pad in a slow and majestic way and headed straight up with trace of wind at launch. The ejection was near perfect at apogee. I can't imagine launching it with a longer ejection delay so I would recommend using the Fat Boy engine recommendations.

Recovery:
The Der Fat Max uses the Fat Boy parachute that comes with the kit. This is a perfect size since it returned the rocket safely without a lot of drift. I am tempted to replace it with a skull and crossbones parachute that can be found in the current release of the Estes Der Red Max for the added coolness during launch time.

Summary:
This is another well thought out plan set from Excelsior Rocketry. You get to build a rocket that is both familiar and different in its finished state. If you are a fan of the Fat Boy or Der Red Max, I suggest that you add the Der Fat Max to your collection. If you want to build a short stubby rocket now that the Fat Boy is OOP, the parts are common enough that they can easily be obtained through many rocket vendors. Just make sure that you head to Excelsior Rocketry to pick up the Der Fat Max decals and fin patterns to give that short stubby rocket some real character.