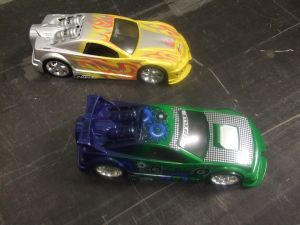 Brief:
I obtained two sets of the Estes rocket car tuner sets in a job lot from a rocketeer that was giving up the hobby. The tuner car comes in three different designs and offers something a bit different to the ‘point it at the sky’ rockets that I had been using.

The base splits into two. The start half contains a metal back plate from which the tuner car blasts off and an electron beam style controller that is hardwired in. The finish half is just a plate to which the other end of the cord is attached. Both halves need to be weighed down by anything heavy (e.g., 2L bottle of water, bricks, buckets of sand etc.). 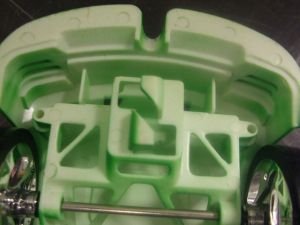 Finishing:
The cars come in three finishes, Drag’on, Gear’zilla and Slammurai. There is very little difference between the cars, except the colours

Flight and Recovery:
Prepping the tuner car for ‘flight’ involves placing an A10-PT motor in the engine mount. This mount it attached to the cord. The car is then attached to the mount. For reasons that I cannot figure out, there is a retaining clip for the motor. As it is a plugged motor, it's difficult to see why it is there. The mount itself aligns the motor.

The front end of the car has the forward launch lugs. I have not had any problems with these, however, from reading the previous review, I have taken the slightly easier precaution of putting a bit of tape across to prevent the string from coming off.

The first few launches were terrible. The car flipped half way down the track and continued upside down damaging the finish of the car. Looking back, this was probably due to the cord being a bit slack and there being gravel on the course.

Eventually, I figured it out, tightened the cord, cleared out the path, and a perfect launch occurred.

The tuner car slows down in three ways. First is friction. The deceleration after boost is rapid and my track is coarse tarmac. Secondly, a parachute. A small parachute is on a slider near the end of the cord, the car picks up the slider and this opens the parachute slowing the car down. Lastly, there is a shock absorber tube at the end. This is there as a fail safe just in case the parachute fails to open, and it stops the front end of the car from being damaged.

With my car the last two methods were not needed, the deceleration was so great, that the tuner car had come to a halt before reaching the end of the track. This I think is partly due to the rough surface I used and partly due to the stocky design of the car. I also have the funny car (with speedometer) and that car needs the parachute.

You may be tempted to remove the car from the cord and let it roam free (and against Estes safety instructions). In the interests of science I tried this–-don't. It skids, flips, twists all over the place, and it is unsafe.

Summary:
I was a little disappointed at first with the rocket car. I had hopes for something a bit more spectacular. However, rocket cars have grown on me, especially as the winds in Britain pick up for winter and cars tethered to the ground are remarkably resistant to weathercocking.