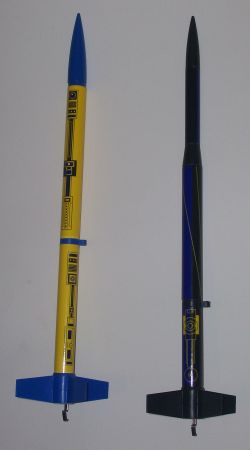 Brief:
The Estes X-Flyers is a kit in the “Launchables“ series which contains two easy-to-build pre-decorated model rockets. Alex, age 10 at the time, built both rockets in under ten minutes each without adult assistance.

The Estes instructions are clear and easy to follow. For both rockets, the first step is to attach the fin can to the lower section of BT-20. The fin can includes a molded slot to fit around the engine hook. The coupler between the upper and lower sections of BT-20 includes a short launch lug that lines up with another launch lug on the fin can. Inside is a molded plastic anchor for the shock cord, which is a great improvement over the traditional tri-fold paper mount. 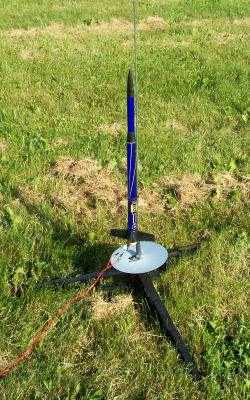 On X-Flyer #1, the nose section is a three-piece assembly consisting of a BT-5 nose cone, a 3” length of BT-5, and a tube adapter with a shock cord anchor at the small end. #2 uses a standard plastic BT-20 nose cone.

Both rockets use a pre-assembled 12” parachute which is tied to the shock cord 1” from the nose cone.

They are very easy to build, thanks to mostly easy steps. The only hard part is pulling the shock cord through into the retainer and putting the cap on the retainer.

Finishing:
There really is no finishing to do. All parts are pre-colored and the body tubes have printed graphics. #1 is dark blue and black with yellow graphics, and #2 is yellow with a medium blue nose cone and fins.

Flight:
We flew both rockets on A8-3 motors on clear days with light winds. Both boosted straight to an impressive altitude. 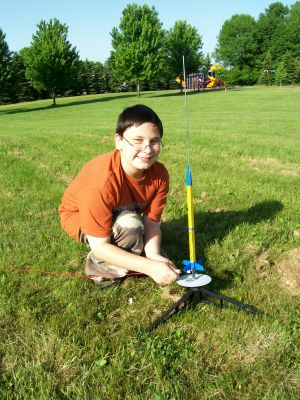 Recovery:
X-Flyer #1’s parachute worked effectively despite a small burn hole, and the rocket was recovered undamaged. On the first flight of X-Flyer #2, the parachute was fused together by the ejection charge, and it never deployed. The damaged chute acted as a streamer, and the rocket was recovered otherwise undamaged. Alex replaced the parachute with a streamer for later flights. On the second try, the streamer worked perfectly.

Given that these are minimum diameter BT-20 rockets, it seems odd that Estes would use a parachute instead of a streamer. Many of Estes’ other kits of similar size, like the Hi-Flier, use a streamer. The sturdy plastic fin cans can certainly stand up to the slightly harder landing, and there is less chance of the rocket drifting away on the wind.

Summary:
The X-Flyers are good beginner rockets that are easy to build yet attractive. They are among Alex's favorites.