Brief:
This is a simple rack to hold your rockets while you work on them. There are bigger, fancier, and nicer ones out there, but this one is free. It can be downloaded from ASP Rocketry's website. It won't hold anything too big but it does prove useful in a pinch.

Construction:
The only component is a downloaded PDF file. You then print the file out on a piece of cardstock.

Construction is simple. You cut out along the solid lines and fold along the dashed lines. What you are left with is a longish piece of cardstock with a notch at each end, some gussets, and a few flaps. You fold the ends up and fold the flaps under the base. You can then secure them with glue or tape. I used CA because I happened to have a bottle of it out in front of me. 30 seconds later, it was ready to go.

CONs: small size, strength limited to the capacity of the cardstock. 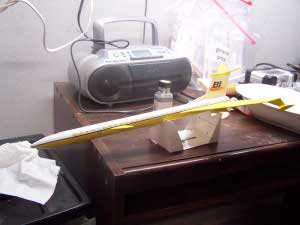 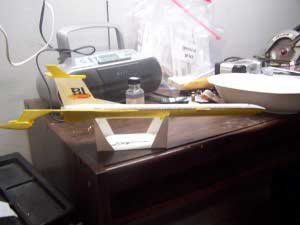 Now that I've tried actually using one of these gizmos, I'm glad to have it. It did make filleting easier and better. That means I'm either going to be buying or making some bigger ones too. (I'm cheap, but I'm also lazy. You have to ask the wife which one takes precedence.) 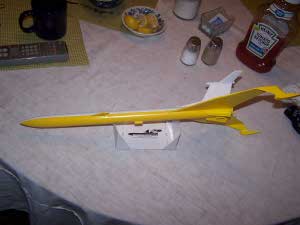 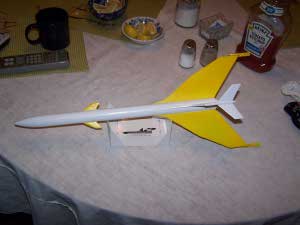 I will probably make another one and modify the notch at one end to accommodate long fins and such that don't want to sit right in the default notch. For the price of the cardstock, I can afford to make a mission specific one for each rocket!

Summary:
This thing is just the ticket in some situations. I stumbled across it while investigating the ASP site. A few hours later, I was wishing for just such a creature as I tried to keep the fillets on a rocket level.

I'd certainly like to have a nice, big, wooden one but I apparently have not wanted one badly enough to do anything about it. Perhaps, seeing how handy this can be, I will buy or make one next time I work on a larger diameter project.