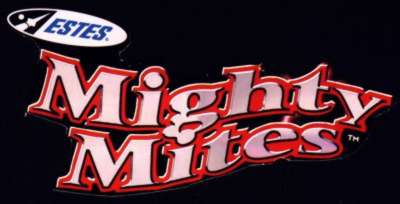 This Estes ARF rocket set contains  two "tiny" rockets; one called the "Blitz" and the other one the "Sizzler". 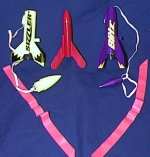 Package: It would be hard to fault Estes on their packaging. They have made some pretty slick sets to catch your eye; especially those "YOUNG" eyes that miss nothing !! It is well done and very attractive.

Components: The parts consist of (2) rockets with shock cord and nose cone attached, (2) plastic streamers, and (2) motor retention rings. The rockets are made of moulded plastic, and the fins although very thin seem to be flexible enough as not to break easily. There is (1) extra motor retention ring in the package. ---The Estes Mosquito is used for size comparison. I told you the LOGO was bigger than the rockets !!

All of the parts appeared to be in good shape and seemed well made considering what they are and all. I thought it was a "Nice Touch" giving you an extra motor retention ring. These rockets us the 13mm motors.

Assembly: Consists of attaching the streamer to the shock cord. This shouldn't cause too much difficulty. I didn't make a picture of this because I think you "Get the Picture" without it.

Concerns: An initial observation that has me wondering about the outcome, is the body tube of the "Blitz". It is fashioned after the "50's" style and has a body tube that is larger diameter in the middle than on the ends. As you can see, the "Sizzler" on the other hand has a more conventional "Straight" sided body tube. My concern is if the wadding and streamer might get congested trying to get out the smaller opening ?? I will have to fly this one first !! Photo of outcome to follow..

Recommended Engines: Below is the listed engine selection. The A10-3T will make this "Small" rocket look even smaller at 600 Ft. !!

I promise to use nothing less than an A10-3T for the first flight. Of course, this is how I lost my very first Mosquito, and the second, third, and so on - you know what I mean, I know you're out there .... 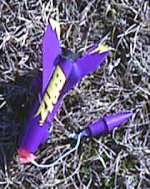 First Flight: After prepping the "Mighty Blitz" for it's first flight; adding the motor (A10-3T) I promised - , the wadding, etc. Had a short delay, one of my recovery crew had to use the bathroom. It's hard to get good grandkids these days... :) The rocket went very similar to the Estes Mosquito - Psssst , and it was gone. Lost sight of it until ejection. Streamer did not deploy. Rocket floated down and picture shows the result. My concern about the wadding and streamer getting out of that tapered tube was well founded. I didn't see how it would work properly. The body tube got so hot that one of the fins was pressed over just from the weight of the rocket and it will fly no more. If you place some wadding into a funnel, you will be hard pressed to get it out the small end very quickly. This is what happened here. The flight of the "Sizzler" was the same except the recovery system worked in it's "Straight" tube body.

Rating: 1 out of 5 points. Because of the poor design of the "Blitz", and the frustration level it could cause a "New" prospective rocket person, that is the best I could do. This package needs some major changes to be acceptable as I see it.

Late addition - The Addendum at the left was supposed to be in the package. A friend of mine brought one over to show me after I already fried my Blitz trying to use the streamer. Little things like a missing addendum can and will cause some grief. This is VERY close to full size.