Brief:
This X-Prize scale rocket showed good potential and an intriguing stealthy boost glider design, but save your money though, as it's a real clunker for flight. 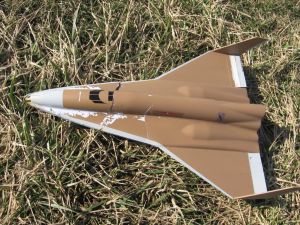 The instructions are fairly clear with plenty of good illustrations. It's rated as a skill level 2 kit although I would have put it closer to a 3.

You begin with the construction of the pop pod. Nose weight is added in the form of 4 heavy steel washers on the forward end. On the aft end, there's a motor hook, block, and a wire assembly that serves to lock the elevators in place for flight.

The fuselage tube is simple, basically serving as a conduit to hold the pop pod. It gets a bulkhead on the forward end and is eventually mounted to the balsa wing assembly.

For a largely plastic body, this kit has a lot of balsa, adding both weight and complexity to the construction. There is a pair of matching wing halves, top and bottom vertical stabilizers, and a pair of elevators (one fixed, one floating). I goofed and didn't catch that the lower stabilizers are not symmetrical--there's a definite left and right--and I got them backwards initially. They have to be right or else the elevators and wire retention hook won't line up correctly.

The plastic fuselage halves are then bonded to the balsa frame. I couldn't get mine to line up very well and it took some trimming and a lot of gap filling before I was finally done. The instructions call for using a silicone adhesive. I used contact cement, which was just as effective but not as clean and easy to work with.

Finally, there is a display plug that has three nozzles. It's a nice visual touch.

Finishing:
Finishing on this kit is a bit of a pain. There's the matter of fairly ugly seams between the fuselage halves and there is plenty of exposed balsa grain. I applied a couple of light coats of primer, then sanded down to at least cover the worst of the grain. After that, I went with a tan finish paint, followed by a trim of gray, per the standard paint scheme. Masking off the gray is challenging, given the contours of the fuselage. Finally, there are a smattering of peel 'n' stick decals for trim. 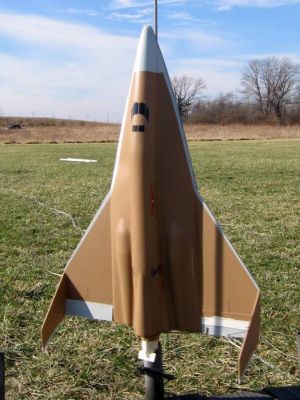 Flight:
At nearly 9 ounces, I think the recommended D12-3 is overly optimistic. The Estes catalog claims altitudes of 250 feet. I think this rocket would benefit greatly from substituting higher thrust composite Es.

The flight profile is intended to have elevators locked in opposing positions during boost, giving it a roll to help stability. At apogee, the ejection charge forces the inner pop pod out, which falls under chute recovery. By removing the heavy pod, the glider is now light enough to fly and the floating elevator can spring into a lift-generating position. At least, that's the theory.

My flight lifted off fine although very slowly. It gently climbed with a slight roll. About halfway through the climb, it arced over and started a nose dive, crash landing under thrust. The pod deployed with a great deal of force, still on the ground. The impact cracked both fuselage halves, one section of balsa wing, and generally rendered this rocket to be retired from future service. A very disappointing performance.

Recovery:
The only feeble pro I can offer up is that a few of the kids at the launch thought the wreck was cool.

The cons are obvious: lousy flight, underpowered for the weight.

Summary:
There are very few rockets I've ever built that I felt were complete wastes of my time and money. This was definitely one of them. It might make a nice display model but not a good flyer.

Comments: After reading this review, I have decided that my Cosmos Mariner will become Display Only model and the beast's innards will be 'reassigned' to a freelance scratch-built boost glider project loosely based on Convair's XB-53 design proposal, with a sci-fi twist. Which, it seems, may have a better chance of success, even if it might be a "roll-of-the-dice" for either model's chance of coming back alive. later, F.S.W.

I think the reviewer was far too nice about this bird. First of all, Estes lists this kit as a skill 2 IIRC and really ought to be a skill 5. The plastic body pieces fit together poorly and the instructions were rather cryptic as to exactly how they were to line-up before trimming the edges. Not only that, but the instructions suggest silicone glue for securing the plastic to the balsa. After mine crashed, I was able to easily pull apart the plastic from the balsa. Bad choice of glue which probably should have been epoxy. I only got one decent flight out of mine and that was terrifying at best. The motor pod ejected with a gigantic pop which vaguely resembled a cato and the shroud lines ripped off the parachute almost every time I launched it no matter how it was packed. In any amount of breeze it weather-cocked like no other. If you are an LSO and someone shows up with one of these in your flight-line be sure to have them place it on the ?away? pads and make it a heads-up launch. This kit is a flying piece of garbage and I am sorry I wasted my money on it.

This is a very delicate model. The balsa for the frame is only 1/16-inch thick. It splits very easily when not handled carefully before the body shells are attached. Like Chan, I used contact cement to attach the body shells (specifically, the non-toxic water-based variety that doesn't attach the plastic). This stuff holds the parts together very well but you must be very precise when actually joining the parts. I agree that this model is more "show" than "go". It just doesn't have the structural strength to handle any kind of adverse landing, let alone landing on any kind of hard surface.