Modifications:
Well here we go again with a major kit bash. Let me start by saying that I love Yank kits as they are made with first rate materials (no cheap elastic or brittle phenolic here). As far as the Army Hawk model well I just had to see what this could do on a more 'realistic' motor. The rocket is 45" in length and I wanted a motor which would produce a tail that was at least as long as the rocket and as wide. For this a J350 and J570 seemed the best options.

With this in mind I modified the stock kit as follows: 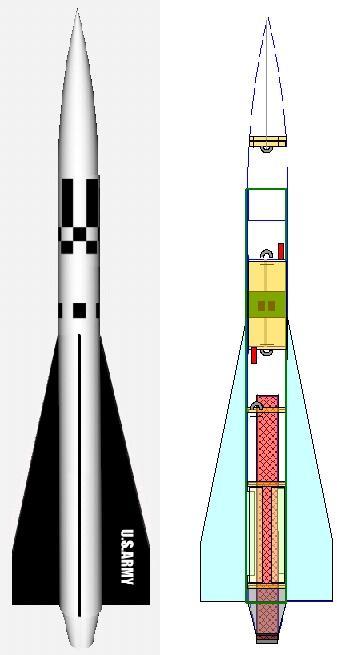 The modifications were so extensive that this kit is more scratch than 'mod'. However, the dimensions remain mostly the same and Yank deserve a lot of credit for attempting to package such a difficult kit (lots of people have failed to load enough nose weight and so they don't always fly).

It was clear from the start that the very large fin area would require extensive reinforcement if it was going survive more than one hard landing. With this in mind I profiled the fins with my Dremel and layed up a single layer of 6oz carbon fiber using my food saver to vacuum bag them. The result was a very strong set of fins ready to mount onto the motor mount (I had slotted the body tube all the way down so I could mount the fins on the motor mount and use carbon fiber tape to really get a good grip on the fins.). Once the fins were on the motor mount which now had 3 centering rings to provide increased surface area for mounting inside the airframe, I slotted them in to the previously fiberglassed airframe (no carbon fiber on the airframe as I felt the flexible phenolic would be fine with just one layer of fiberglass). Once epoxied in place I used a light fiberglass cloth the provide a fin-to-fin lay up. This produced a single fin/motor assembly which was solid as a rock.

The only problem now lay in getting the center of gravity forward of the center of pressure. It took 3lbs of lead to achieve this. The resulting rocket was 8.75 lbs (without motor). The electronics bay has a 2" section of airframe surrounding it to provide for key switches to arm the electronics and pyro charges. As usual my Foodsaver and Dremel were the key elements in construction with my palm sander providing the desired finish.

As a stock kit the parts and packaging were first rate. Instructions were brief as usual but since this was a kit bash I didn't read them much. As a kit bash it was more of a long process than a difficult one. The layups take time and with four large fins it seems to go on forever. For its size this kit took a long time to build. The finishing (my favorite part) was a matter of using SuperFil on the fins and body along with a coat of UV Smooth Prime. This built up a nice thick coating which I could sand down to a smoothness that did not cut into the composite layer. I used the White/Black Hawk motif instead of the Army Green motif. I added a bit of checkerboard for fun and had some US ARMY decals made up to give it the final look. The result is a nice looking rocket which looks small but packs a big load. 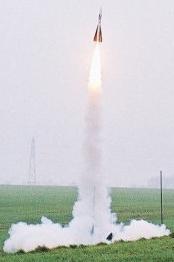 Flight:
Due to the excessive weight the only motors for this rocket are at the end of the 38mm range. Hence, a J350, J570 or big Pro38 motor is required. For its first flight I had a J350 laying about and decided to give it a go. Using motor ejection as a backup and an RDAS flight computer as the primary means of recovery I prep'd the rocket with a drogue and a big 44" Rocketman chute. Shock cords were all tubular nylon (15feet on each side of the electronics bay). I was really concerned about drag separation so I used shear pins to hold both the nosecone and motor section to the recovery section (I tested each end using 1gram of BP for the aft section and 1.5gram of BP for the nosecone). Finally the moment of truth. Would the rocket fly straight or would it 'turn its tail and bury itself in the soft December ground' ? 3 2 1 Whoooosh the J350 lit and in the low light of a December sky this was very cool. Straight up on a nice long tail plume it climbed to 2500 feet before the ejection charge let loose the drogue. Down it came... down... down... down... splat. The main didn't fire. Well this was going to be interesting. Did my heavy duty treatment of the fins work or would the rocket be a 'write-off' ? Upon inspection the fins were untouched by the experience but the forward recovery section was split. The data from the RDAS showed a nice boost with apogee being detected. However, both ejection charges were intact and it was the backup motor ejection which save the rocket from a total lawn dart. I can only surmise that the battery was too weak to fire the Davy Fire E-matches. So I am switching to flashbulbs in cold weather. I am finishing the new forward recovery section and it will fly again soon.

Summary:
Great rocket with the mods making for a long satisfying build time. The small rocket size combined with the large motors give it a nice realistic flight profile. No real cons to speak of.

Other:
When you build your rocket first think about how you want it to look in flight. This will give you an indication of how big a motor to build it for and how much additional construction is required.