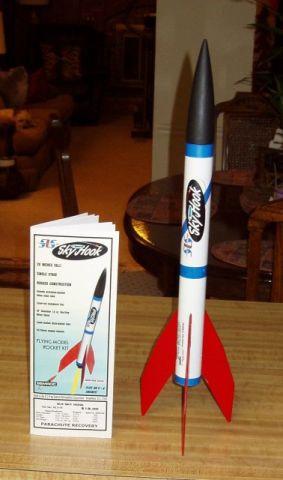 Brief:
This upscale of an old Estes kit is one of Semroc's new Semroc Large-Scale (SLS) line. It flies on 24mm and 29mm motors in the C to F range. The kit features thick walled body tubes, laser cut basswood fins, nylon chutes, a laser slotted tube, and a Kevlar recovery leader.

Construction:
The kit from BRS Hobbies came nicely packed with a colorful insert, which also holds the instructions. As you can see in the photos, individual parts such as the motor mount, chute, fins, and miscellaneous small parts are all individually packaged. No more dropping some small item followed by the associated searching. The parts themselves are of outstanding quality. The fins are flat and identical, the body tubes are very thick, the balsa nose cone is smooth and hard. The instructions are short but clear and include plenty of diagrams. There is even a brief history of Estes and of the kit itself. If you should be unhappy with the kit, no problemo as Semroc has a 100% satisfaction guarantee!

So the parts include:

To build the kit, you require all the normal tools and supplies: white or wood glue, filler, paint, sandpaper, etc. I used wood glue throughout.

This was a simple kit to build and I followed the order of the instructions. I started with the 24mm motor mount, which had its own instructions. The slot for the motor clip was pre-cut and from there you glue in the motor block and the two wide and thick centering rings. These were actually pieces of tube that telescoped over the 24mm tube.

From there I proceeded to glue the motor block in the 29mm tube. You first tie the Kevlar® twine around the block. My first impulse was to go for the epoxy, but I decided to keep with the recommended wood glue.

The next step was to round the edges of the fins and test their fit. They required a few swipes of sandpaper along their tabs. As you can see, since the motor tube fits directly into the body tube, there isn't much of a tab. You weren't asked to fill the grain at this point, so I didn't. On the EMRR review of another SLS kit, I noticed a fin popped off. I decided to see how this kit fared. If I have to make repairs, I'll try the epoxy. 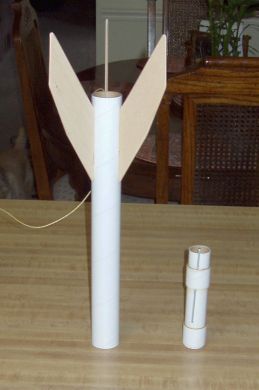 To install the motor mount, you swab a liberal amount of glue just ahead of the fin tabs and push in the mount. The fit of the tube is a little loose and you immediately glue on the fins. I set the tube fins up to dry and noticed the motor tube was sliding further into the body. Glad I caught that one! The TTW fins, despite being shallow, should add a lot of strength and made fin alignment trivial. Up to this point, everything was done in one sitting. I then paused to let the motor mount and fins dry. I went back later and added an internal fillet above the motor mount.

Next came fillets, adding the eye hook to the cone, and completing the recovery system. I didn't tie on the chute but instead added a snap swivel and added it to my stable of reusable chutes. After it was all together, I went to slide on the nose cone and found the shoulder was too large. Being balsa, sanding it down wasn't a problem and the result is a nice snug fit.

The one CON is that you have to make sure the motor tube doesn't slide out of place. This could be avoided if you let the glue set first, but the instructions say to proceed. Some sanding on the fins and cone was required, but this not a big deal and was discussed in the instructions. As a result, I don't really consider them CONs.

Finishing:
There are finishing instructions and they are typical. Minimal filling is required due to the fine grain of the cone and basswood fins. I painted the body white, nose black, and fins red, just like the cover drawing. The main decal sheet includes one large wrap that covers the top half of the body tube and a blue strip to go just below the fins. There is also a small specs decal. On the plus side, the decals are thick and easy to work with. This is a very good thing since it took me a month of Sundays to get the large decal positioned. I also swabbed the bubbles forever, and there are still a few. Anyway, I shot a clear coat to help the decals stay put. The decal color is reasonably good, especially if the background is white. 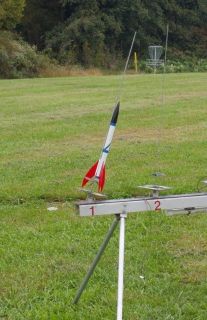 For its maiden flight, I loaded it with the 24mm adapter and a C11-7. This is a longer delay than recommended but it's what I had. Plus I had added a strip of 'anti-zipper' cloth tape where the Kevlar® meets the top of the body tube, so I went for it. I held the adapter in with a lot of masking tape. The wadding was dog barf wrapped in Quest wadding. The flight was nice but ejection was late as predicted. Recovery was good on the largish chute. When I got to the rocket I found the eye-hook had pulled out of the cone, which was gone, and it also spat the adapter. I will split the blame on the cone since I used the wrong delay and the adapter was probably user error. All parts were recovered.

I CAed the eye hook back in, reseated the adapter, and swapped the chute for a 12 incher--there was a bit of wind early and I didn't want to feed the trees. The motor choice was a D12-5. This time the delay was shorter than recommended, but I angled the rod some to keep it from the tree line. It tore off like a bat and I didn't see where it ejected. However, recovery was 100% good this time. It was a grass landing and there were no cracked fillets even with the smaller chute.

I will try it on an E9-8 (this time a recommended motor) next weekend. I will have already submitted this review, so watch the logs below.

Summary:
The materials in this kit were as good as I've ever seen and it was a pleasure to build. The only build issue is to make sure the motor tube doesn't slip while the fins dry. This could be fixed by a piece of tape or a watchful eye, but it is a potential major "gotcha". I had to deduct a construction point here.

This is a very sturdy kit and would be a great choice for someone who wants to move on from Estes kits to mid power. With the bigger motors, you better have a nice sized field!

My thanks to Brian at BRS Hobbies for sponsoring this review! 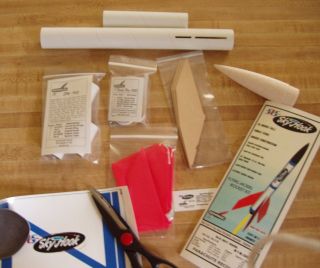 This review is right on target. This is a superb model, in keeping with Semroc's extreme quality. I built this as a companion to my Semroc "retro-repro" Astron Sky Hook clone, and both are excellent performers. My favorite flight is on an Estes E9-8. Much more and I wouldn't get to see the whole flight. For that reason, one could consider simply gluing the 24mm adapter in place.