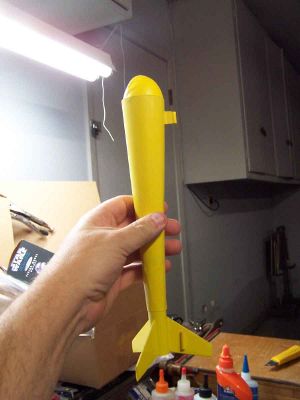 Brief:
The 2 Minute Egg is a rocket designed by George Gassaway for egglofting competitions. It is posted as a free download at the NAR site and I found it by posing a general question on The Rocketry Forum (TRF) and following the many helpful links provided in response.

Construction:
The 2 Minute Egg can be made with a piece of cardstock, some 3/32" balsa, a 4" piece of BT-20, a centering ring and an egg capsule. Additionally, you will need a parachute and shock cord.

Construction of the 2 Minute Egg began with the simple expedient of printing out the PDF file. I used 110# cardstock and a laser printer. Then it was a matter of cutting out the desired shroud. The second page of the plan provides 2 different options. One is for 1.75" diameter capsules and the other is for 1.9-2" diameter. I chose the smaller because of an idea for a modification, also gotten from TRF. 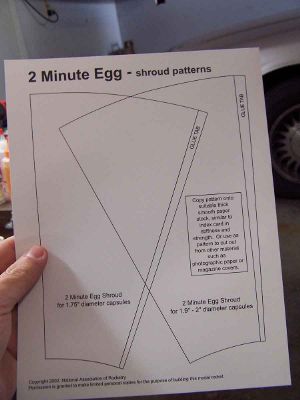 After cutting out the shroud, I did some pre-rolling by dragging around the corner of a desk and then rolling it into a tube and setting inside my stock of BT-20 while I attended to the fins.

The plans have a cut out template for the 3 fins and instructions to use 3/32" balsa. I checked my stocks and found none of that thickness. I did have 1/16" and I planned to laminate the fins so I went with that. I cut out the template and traced the pattern onto the balsa, making sure to align the grain properly. The fins were then cut out with a X-Acto knife guided by a steel ruler.

I started sanding the fins. I can't really say I put an airfoil in them but I did round the leading edge and somewhat tapered the trailing edge. Each fin was then pressed down on a sheet of self-adhesive label paper and the X-Acto was used to trim away the excess. The fins were then flipped and the label stock applied to the other side in the same manner.

The rocket needs a 4" length of BT-20. I did not have any 4" pieces so I marked off the distance on a full length piece and then used tape to mark the circumference. The razor knife was then used to slowly score around the tube and cut it. The end was sanded down and then an Estes marking guide was used to put the 3FNC lines in place.

The fins were place with a double glue joint of Elmer's yellow glue. After they had dried, the sides were filleted with white glue.

Finishing:
I figured I was ready to start finishing. I know that many contest rockets remain unpainted to save on weight, but I wanted to paint mine. First, because I think it looks better and second because my contests aren't all that serious anyway.

I wanted to keep in the "egg" theme so I chose a yellow that was already open. I began spraying light coats. The printing from the shroud was still showing through but I figured 2 more coats should take take of that. That's when I noticed that I had not installed the launch lug.

After the paint had a day to dry, I took the rocket back to the bench and cut two pieces of 1/8" lug. I used a piece of rod to find a place on one fin where the lug would just clear the upper end of the shroud and then used a razor knife to scrape the paint away from the fin there. The lower lug was then glued in place with white glue.

I looked around for a piece of scrap balsa with the grain running in the right direction, perpendicular to the lug, and found one which I trimmed to the length of the upper lug. I purposely left it to long so that the correct length could be cut when the glue on the lower lug was dry and it could handle a rod for alignment. The upper lug was glued onto the standoff.

The lower lug got to dry overnight and then I used a short length of rod to line up the upper one. I made a mark on the standoff to slice it a bit longer than the right length and then used sandpaper to sand in the contour of the cone. I then marked the shroud for the proper location, scraped off the paint, and installed the upper lug with a double glue joint.

After the lugs had an opportunity to dry, they were filleted with white glue and allowed to dry some more. The 2 Minute Egg was then taken back to the booth for a final application of yellow paint. It actually took 2 more light coats to cover the printing.

The 2 Minute Egg is designed for use with a commercially made egg capsule. Through inattention, I found the day of my club launch upon me and I had not yet ordered the capsule. With that in mind, I fell back on plan B, an idea I had read about and which had intrigued me.

I purchased some balloons and, after a bit of fretting, managed to get one around an egg. A piece of elastic was tied off around the open end of the balloon and the elastic was tied into the Kevlar® shock mount. Under this schema, the egg is the nose cone and relies on a large chute to get down safely. 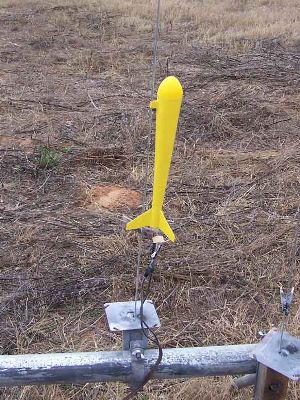 The day of the contest dawned and brought with it sustained 20mph winds and gusts to 35. Even so, all were determined to participate. All of the sudden, the 24" parachute I had packed was beginning to look a little small.

The rocket was prepped with a C6-3, some wadding and the egg balloon was carefully placed. The countdown came. The motor ignited and then the rocket went up. As soon as it cleared the wind shadow from the ground support truck, it began to weathercock into the wind. It didn't get all that high but it did eject before the parabolic trajectory started in the down direction. Out came the chute and a problem was immediately apparent. The chute was not opening. It was just acting as a big streamer but not big enough.

The rocket came streaming down with pretty significant components to both the vertical and horizontal velocity vectors. The result was very "squishy". I'm so glad the egg was enclosed in a balloon. A video of the flight can be seen here.

The balloon saved the rocket from being subject to a hideous mess but the rocket did sustain some damage. One of the fins broke its joint and remained connected to the BT by only a skin of filleting glue. It will be an easy repair. A video showing the reason for the balloon can be seen here.

Summary:
Even though my flight was disqualified, I am prepared to offer a few observations about this rocket design.

Not a single rocket qualified on the day of the contest. High winds made recovery of the eggs problematical. Of all the flights, mine performed best, getting the best altitude and had the added benefit of actually ejecting while in the air.

This is a simple rocket. I would use it again. It requires a bit of luck for the trick to save weight by using a balloon to work but I think it is worth the risk. The rocket is light enough and is designed for a regular egg carrier.