Brief:
Somewhere in the twisted mind of a goony fanatic, the goodydent was created. The goonydent is a kit base goony from two baby berthas. It uses gas venting tubes so no wadding is needed. I was bitten by the goony bug this year, this will be my second goony. It gets noticed on the pad.
Construction:
The idea of the kit bash goonies from gordy is that you use Baby Berthas as the starting point, but with the goonydent, that is just plain silly.
Mainly because you have to add in: 6 mosquito nose cones, an extra Baby Bertha nose cone, a D motor mount, CRs, fin material, and three lengths of BT5.
That means you are only using the BT and NC from the kits (I am not using the estes shock cord or chutes for obvious reasons.)
It's cheaper to just buy two nose cones and the BT than to open up Baby Bertha kits. Not to metion that I've only got 5 of those kits left and they are expensive kits for what you get.
My BT came from a retired rocket that I built 10 or more years ago. It was BT-60 based long neck and had a BT-50 motor mount in its base (a bit like a Mean Machine but it had a transition - so more like a Das Modell - Hummel)
From the rocket I was able to cut 5 baby bertha lengths. And it saved me from having to use up fresh parts on the motor mount and ring as one section has a D mount in it. 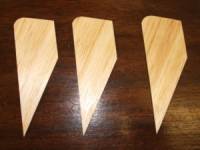 The plans come with a fin template. Three fins were cut and sealed with two coats of sanding sealer.. 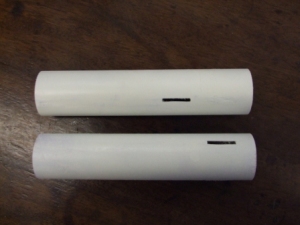 Top and Bottom BT-60 tubes cut, most of the old purple paint removed and the spirals filled.

I primed the BT-60 with white primer to spot any blemishs. Cutting the vent slots was easier than I thought.  I used a displosable craft knife, where the blade gets snapped off to get a fresh edge.

The BT-5 vent tubes were cut, but I inserted a spent 13mm motor to prevent the tube from crimping. I stupidly cut one of the vent tubes incorrectly which you can see in the picture.

This takes alot of time, but was easier than I thought it would be. It pays to be patience and allow the glue to dry.The inside Baby Bertha nosecones were glued into place.

I filleted the joints between the tubes with a few fillets of white glue and then model filler. Next the Mosquito nose cones are added. (All these bits make this an expensive kit, but it looks too cool to worry about cost).

The rocket was then sprayed primer white, even though the fins have not been added, because I find it easier to find blemishes when there is just one color.

Fins and the launch lug were than added to the bottom bodytube.

The recovery system is the standard elastic shock cord and the Estes trifold anchor. The parachute is a 12 inch parachute.Finishing the rocket is very easy. The entire rocket is white. White primer and white gloss was used.

The decals from Excelsiorrocketry are simply fantastic. The waterslide decals were very thin, but strong and went on easily.

The recommended motor is a D12-5 (only). Although the rocket used vent tube cooling, and therefore does not need wadding, I did still add a sheet of wadding - just to be on the safe side.

The Goonydent lifted and flew straight. Ejection - or explosion - was just past apogee. The parachute did not unfurl and she smacked the ground quite hard. But that was only a secondardy issue.

Estes's legendary shotgun ejection charge had ripped the Goonydent to pieces. The side of the rocket was blown out, one of the vent tubes had ripped clean at one end. Two fins were missing. 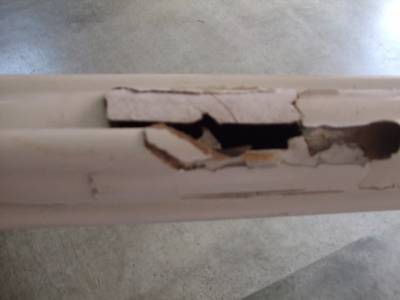 Amazingly despite the main frame ripping apart, enough hot gas had made it through the vent tube to deploy the chute whilst also giving a small melt which is why the prachute did not open.

I was probably just unlucky with a more powerful than average ejection charge, nevertheless I feel I'll have to lower the flight rating given my experience.

A great rocket, a bit unusual looking but I think this could become one of my favourite D motor birds - I will be reworking my modified Goonydent. Although the plan sets from Excelsiorrocketry are cheap, the parts list for this rocket makes it quite expensive - but it's worth it.