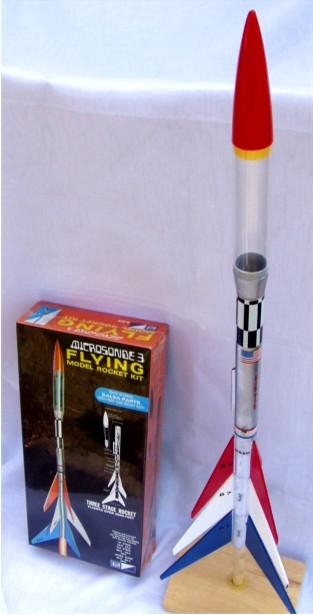 The MPC Microsonde 3, is a 3 stage rocket capable of attaining heights of more than 2000feet. It's one of the Mach 10 series of MPC rockets. It has a clear plastic payload bay for carrying electronics or experiments aloft. The first and second stages of this rocket have tumble recovery and the main booster tube has a parachute. Take your time when building this rocket and it will be one of the most prized rockets in your collection. If you build it in a rush you will end up with a clumsy looking rocket that will be even more clumsy in flight.

This rocket kit comes with some nice features not found on many of the other MPC kits. It can attain heights as high as 2000 feet. The shock cord on the Microsonde 3 is an elastic one. It is threaded through 3 holes on a small rectangle of card stock and then glued into the body tube far enough in so that it will not interfere with the payload bay/nose cone. In addition this kit comes with a block of permanent fireproof wadding. Because the kit comes in a cardboard box, it doesn't have the extra vacuum formed detailing parts that the kits that come in the plastic packaging do, It has plenty of waterslide decals to fill out all 3 stages. It has a 10inch 6 sided parachute and comes with a separate instruction sheet that has directions on how to set up the engines for multistage flights. It also comes with a count down and safety card, and like all other MPC kits it has a couple of .if found please return to" stickers.

I started this kit by building the engine mounts first. Pay close attention to the measuring and placement of the engine tubes into the booster tubes. They serve as tube couplers as well as engine mounts. Only the third stage has an engine block in its engine mount tube. As the glue was drying on the motor mounts, I marked out the fin lines on the body tubes. This is best accomplished by putting all of the stages together and then measuring out, and drawing the fin lines down the entire length of all of the tubes/stages at the same time. A paper fin template can be wrapped around the body tubes to mark out their positions, but I use the plastic Estes fin marking guides. Once this was done I started working on the fins. The fins were carefully cut from the balsa stock. The balsa isn't die-cut so they require more care in cutting them from the balsa sheets. Use a straight edge like a ruler to get nice straight uniform cuts. Once they were all cut out I pinned together the 3 fins from each of the 3 stages. When they were pinned together I sanded the 3 fins from each of the 3 stages together, till the fins for each stage were all identically sized. When each set of fins were sanded to be identical they were unpinned and the flat sides were all sanded smooth. Then all of the fins edges, with the exception of the glue edge, were sanded into compound angled edges to cut the air better. When mounting the fins on this, or any other, multistage rocket, I've found that it is best to do it while all of the stages are fitted together. I start with the last stage and work my way up the rocket. When all of the fins are secured to the last stage I move to the next progressive stage making sure each fin is lined up with the fin behind it. This makes for a very neat and precise appearance. It also insures that the rocket will have very stable flights. Once all of the fins were secured to the body tubes I go back and lay in glue fillets with a glue covered fingers. I make sure there are 3 good coats so that it is a good strong bond holding the fins on.

It's crucial to get the engine mounts/tube couplers seated to the proper depths or else the stages of the rocket won't fit together properly. The instructions do a good job of outlining the dimensions for the proper fit of these components. They should extend exactly 3/8ths of an inch from the body tubes.

In addition to being a multistage rocket the Microsonde also has a payload bay. The payload bay is a clear plastic tube slightly larger than the body tube. The nose cone and the reducer are plastic as well. These were assembled with a good quality clear plastic cement. Don't use white or wood glue for these connections. The nose cone must be left unglued for access to the payload bay. If it is at all a loose fit, wrap the shoulder with clear scotch tape till it fits snug.

I completed assembly by gluing the shock cord in and then putting the parachute together. I decided to go with a multicolor paint job. The body and staging tubes were painted a bright metallic silver. The fins on the first stage were painted blue, the second stage fins are white, and the third stage sports fins that are red. The nose cone was painted red to match the third stage fins.

The assembly of this rocket can be tedious and time consuming, but when it is built with patience and care it will be one of the nicest rockets in your collection. It's not really that difficult to build. If you take your time, and line up the fins carefully with the fins on the previous stage, you will have one great looking, and performing rocket.