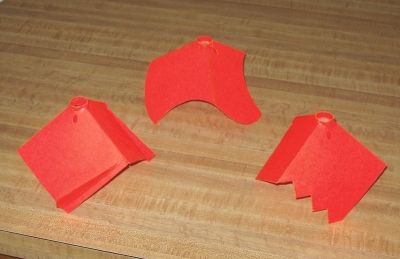 Brief:
This article will discuss Art’s set of 18mm Qubits--the plain variety, the Stealth, and the Scimitar. I got sets of both plain white and florescent orange, but you can get various other colors (at the time of writing: hot pink, neon yellow, and fluorescent green) and a limited edition NSL 2004 Commemorative version.

Construction:
These kits, like the previously reviewed 13mm Qubits, are very simple. All three include only the following:

Each Qubit is built from three cardstock cutouts and a motor hook. The top cutout (bottom right sheet on the first photo) is folded, wrapped around onto itself, and glued together. The tabs on the bottom cutout (bottom middle sheet) are folded up and this is glued into the top section. You merely align and glue the tabs one at a time, making sure the launch rod holes are aligned. The motor tube is rolled from the last cutout. The motor hook is rolled into the motor tube as it is formed. The final step is to insert the motor tube into the shell and glue it in. Could this be simpler? 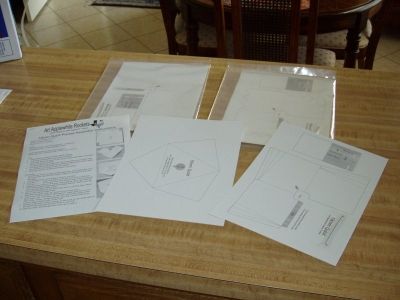 The plain variety Qubit (parts are shown in the first photo) has a few more folds than the others. Each tab has a set of folds, which allow the formation of a spin tab. I found that it was a bit difficult to form these at the narrow end. This was despite having scored the creases, which is my SOP when working with cardstock.

I build one whole Qubit and the bodies of the other two in less than an hour. If I had more than one phenolic 18mm motor casing on hand. I would have finished all of them. However, I decided that the motor mount on the first kit should fully dry before I removed the casing. I could have used cardboard casings also, but with the phenolic, you don't have to worry about gluing the motor into the mount.

Finishing:
None is required, however I did run a day-glow orange hi-lighter along the cut edges to help hide the white form the inside of the cardstock.

EMRR will show my overall rating for the three kits. Individually, I would rate them as follows: 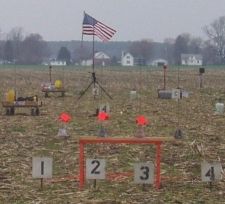 Flight:
I flew both sets of Qubits three times. The first two sets were in extremely high winds - about 17mph with occasional lulls. The A8-3 flights were very underpowered for these winds, and all three ejected on or near the ground. This is no longer a recommended motor for these rockets. The C6-0 flights were more satisfying. The Stealth went the highest, followed by the Scimitar and the regular Qubit. The Qubit weathercocked the most, which affected its altitude. The Scimitar won the spinning contest. It spun so fast that it emitted an audible whirr, which got everyone’s attention.

I later flew the set of Qubits in light winds. The plain Qubit and the Stealth both boosted very fast and attained a good altitude for a ‘saucer-like’ design. At least one person couldn't believe the motors were C6s. The Scimitar didn't go nearly as high but again spun like crazy. The others appeared to spin (it was hard to see), but the Scimitar really whirred. Interestingly enough, each of the Qubits flew in a different direction: the plain flew slightly perpendicular to the light wind, the Scimitar flew with the wind, and the Stealth flew into the wind. None of the flight angles were large but the differences were noticeable. This is presented basically as a curiosity.

Recovery:
Not much to say...all three came down softly using aerobrake recovery.

Summary:
The 18mm Qubits are super simple, quick and easy to build, and priced right. They are good ‘watching TV’ rockets and would be good for young kids. If you want altitude, get either the Stealth or the plain old Qubit. However, if you want a lot of spin, go for the Scimitar!