Brief:
Ever since I lost my Estes Goblin many years ago, I've always wanted another one. When I became a BAR over a year ago, and saw the Squirrel Works Gremlin, I knew I had to get one. At the Tex-Regional NAR meet in McGregor, TX, in June 2005, the Squirrel Works had a vendor booth on site, and I purchased the only Gremlin available on the table.

The Gremlin is a single staged, single engined model rocket designed to use the Estes 24mm motors and recover with a mylar streamer. Although very similar to the Estes Goblin, the Gremlin is about one inch longer. As per the Squirrel Works catalog, the Gremlin is fast and powerful and is styled for performace that will top 1,500 feet on a D motor.

In addition to the parts above, I used some surplus parts of my own to build what amounts to a BT-2050 interchangable motor mount adapter so I can also use 18mm motors.

The instructions are very well illustrated and easy to follow. I pretty much built my Gremlin as per instructions, except I did not attach the mylar streamer to the shock cord as shown in the illustrations. I attached one end of the streamer to a shroud line, which in turn was attached to a snap swivel so I can interchange the recovery system as needed. One problem with my kit was the balsa nose cone was very grainy and pocked extensively. Because of this, I knew that I would have to use a lot of sanding sealer/balsa fillercoat (with light sanding in between) to give it a nice appearance.

Finishing:
The balsa fins and nose cone will need sanding sealer/balsa fillercoat with light sanding between applications/drying. Before I fully finished my model, I just gave it a base white coat for its first test flight on a D12-7. Good thing I did, as you'll see in the next paragraph. Afterwards, I completed the painting with gloss white on the main body tube and two fins, gloss black on the nose cone and two fins. The water slide decals went on very easily, and really makes the appearance of the Gremlin stand out. My kids really love the cartoonish decals!

The engine hook locks the engine in place without problem. About five or six squares of loosely crumpled recovery wadding should be sufficient prior to packing the recovery system in the model.

The first flight was at the Challenger 498 Section club launch at Rushing Park, Katy, TX, on a D12-7 and the Gremlin stormed out of sight quickly. It flew very straight and true.

The second flight was at the 2005 Ballunar Festival at the Johnson Space Center, this time using a C6-5. Also flew very well. 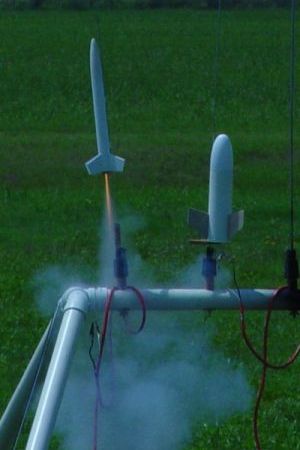 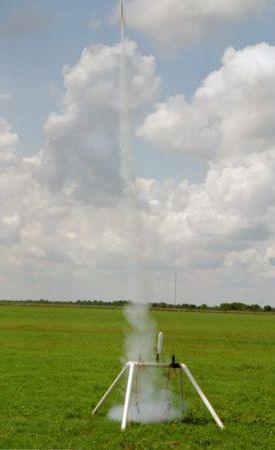 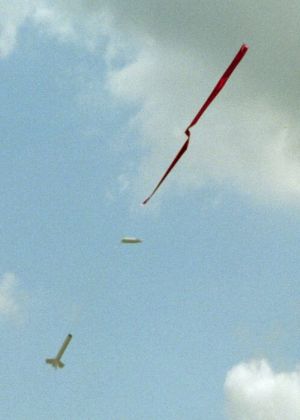 Recovery:
During the first flight (on the D12-7), the descent rate was a bit too fast, plus the main body tube's attitude was at a fins down mode, causing some fin damage to the model on landing. Therefore, I made the decision to use only a 12" parachute on all future Gremlin flights. I used wood filler and CA to repair the damage to the fin, along with sanding to get the damage to proper shape. Since the damaged fin is painted black, it's difficult for most to notice it has been damaged at all.

Summary:
The Gremlin is an excellent kit that I wouldn't want to be without. It is fun to fly for both sport and demonstration flights. With the care and quality Squirrel Works put into this kit, I'm very eager to try their other line of kits in the near future. Personally, I have more fun building and flying a model rocket kit that makes you work and put effort into it. Brings back the meaning of the word, pride!

High quality parts plus the added style from the Squirrel Works graphics department set this one apart. In addition to outstanding performance on the 18mm and 24 mm C's, and D's that Dave reported, mine has flown beautifully on E9's as well. Apparently, the increased airframe length makes the difference allowing stable flights on a wide variety of motors.

S.B. Thanks for the heads up; how about adding your flights of the Gremlin to the flight logs? That would be appreciated! Thanks again.