Brief:
John provided me with the kit to do a beta test. This is a fantastic rocket that includes a number of engineering marvels. It flies on 29mm motors and recovers by parachute. The rocket is 41 inches tall and has a diameter of 1.84 inches. If you've flown the smaller P-Chuter, you know it is one fast rocket. That hasn't been lost on its big brother. The package art will look super displayed with your rocket, too. It's excellent!

Construction:
There aren't many instructions, since the rocket is so easy to build. Not that anything is left out, as the instructions are numbered and cover every step in detail, complete with superb illustrations. There is nothing but quality stuffed into the bag, too. Everything is laser cut and fits perfectly. The balsa nose cone is very nice and required very little finishing effort. Two thick-walled tubes form the main body tube, joined together with a balsa coupler. An eye screw is installed into the rear of the coupler for attachment of the parachute and shock cord, leaving a nice payload area for the upper tube. I seriously considered getting one of the BoosterVision cameras to install in the upper tube, as this rocket would be perfect for that. Unfortunately, limited funds kept me from doing it. The seams in the tubes required very little finishing. The rear tube is slotted to accept the through-the-wall fins that are designed to fit perfectly into a channeled motor mount. The motor mount is fantastic! The centering rings are laser cut basswood (or lite-ply, I never can tell them apart) and come with slats that connect from one ring to the next to form a channel for the fins. Once the basswood fins are epoxied into the channels you have one really strong fin/tube/motor mount joint. Fantastic! The fins fit perfectly in the slots and aligned perfectly. I didn't even have to build a template to hold them or glue them in one at a time. The engineering doesn't end there, though. The kit also includes an internal baffle that really works! The two centering rings for the baffle are again laser cut to fit the two tubes perfectly. The two tubes are glued together, side by side, and then glued to the centering rings, aligned with the two tubes offset from one another. Genius! About the only shortcoming for the rocket is that there isn't anything provided for positive motor retention. The motor must be friction fit to keep it from spitting at ejection. To overcome this, I epoxied three lengths of all-thread along the fin channels and extending to about a half-inch below the end of the motor mount tube. Washers and lock nuts are installed after the motor is installed for retention. Some guys in the club noted that it was overkill, which is true enough, but it looks cool. A Kevlar®/1/4” elastic shock cord combo is included, along with a big 3/16” launch lug, trim Monokote, and waterslide decals. The decals follow the original P-Chuter design and look great on the rocket. The instructions indicate to attach the Kevlar® cord to a hole in the upper centering ring using a knot, but I used my standard tri-fold shock cord attachment to allow inspection of the shock cord. After my first launch though, I don't really think that was necessary with this kit. Like I said, the baffle really works. I love it when the manufacturer puts Kevlar® in the kit. The black 18” ripstop nylon parachute that is included is beautiful, too, and exhibits the same level of quality as the rest of the kit. The parachute was already assembled and had small grommets to which the shroud lines were tied. It's a very nice parachute.

Finishing:
I used Elmer's Light Fill ‘n' Finish to fill the body tube seam lines and for the nose cone. Minimal effort was involved in this step as the seam lines were easily covered and the nose cone was very smooth. Only a light coat of filler was used on the fins as well since the basswood was very smooth after sanding with 400 grit sandpaper. I sprayed the entire model with a light coat of Kilz to seal off the glue and provide a solid base coat. Next, I lightly sanded the entire model with 240 grit sandpaper and then sprayed on a coat of primer. Next, sand, primer, and sand again with 400 grit sandpaper. I painted the model following the three-color red, white and black as shown on the cover art and applied the Monokote and decals after the paint dried for a couple of days. The decals went on much easier and laid down much better than I anticipated. They are fairly big decals for waterslide. The trim Monokote looks fantastic and really pulls the whole rocket together nicely! Once complete, I put on a thick coat of Future floor finish to protect everything. It looks so sweet! 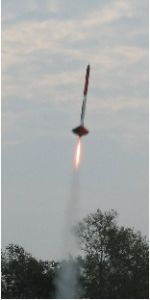 Flight and Recovery:
After waiting several months for a launch opportunity due to bad weather, I finally got to fly it. The weather was near perfect, with blue skies and only light winds. The first launch was on a Roadrunner F60-10. That is a fantastic motor for this rocket. The rocket took off like a shot and zoomed up almost out of sight, deploying the chute right at apogee and the rocket drifted down beautifully on the 18-inch chute. It landed three or four hundred yards away in a grain field. Luckily, it draped itself on top of the thick grain stalks that were about shoulder high. I didn't put any wadding in it and there was only a slight hint of ejection residue on the chute. I very bravely flew it again the next day on an Aerotech G77-7R. The wind was even lighter on this day. I totally lost sight of it so I don't know where the ejection event occurred. It was one impressive launch though. I finally caught sight of the chute and it landed about two to three hundred yards away from the pad in perfect shape.

Summary:
The P-Chuter Xtreme is just fantastic. The engineering that has gone into the kit assures that it will last for a long time. It is one sturdy rocket and is impressive on the launch pad and in flight. You'd better have lots of room for recovery when flying it on the bigger motors though as the performance is as sweet as the looks. The 18-inch ripstop nylon chute is also top quality and perfect for this rocket! I love the fact that I don't have to use recovery wadding, too. Just put in a motor and go! All of John's rockets are superb, but this one in my opinion is the Red River Rocketry Cadillac!