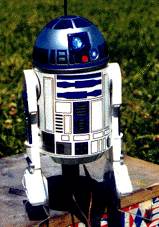 Brief:
A flying replica of the Star Wars R2D2.

Construction:
The instructions were easy to follow, and the order of assembly seemed logical. The kit components were all there and fit well, except for the body wrap decal, which was a bit too short, leaving a 1/8" gap. Regular wood glue and styrene cement were all that was needed.

Finishing:
The decal for the body tube fit poorly, requiring additional painting. The little blue "eye" kept falling off as well, until Super Glue finally held it in place. Overall, the rocket looked good, though details were a bit off. Definitely a skill level 3 to finish correctly.

Flight:
Recommended motor: C6-3. I used a C6-3 and normal recovery wadding. It was difficult installing the motor into the rocket due to the plastic tail housing, and even more difficult to remove. Flight was pathetic, about a 1. Though it flew straight, it barely went over 30 feet, and the parachute deployed just before impact, shearing off a leg. The rocket was retired immediately. I had thought of installing an Aerotech D21-7W, but decided it would probably be best to never fly it again.

Recovery:
The shock cord mounted to the upper centering ring, and the parachute attached near there also. A leg sheared off upon landing, though it was a simple fix. This rocket begs for D power!

Summary:
Estes should have spent more time in development. Its components were well built but heavy, requiring much more power. Increased altitude would allow `chute deployment, which didn't fully open.