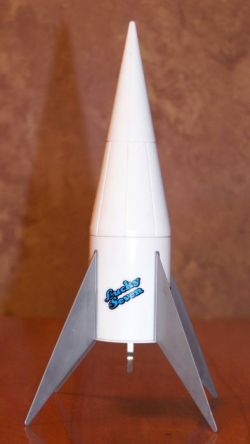 Brief:
This is a semi-scale model of the Acceleration Engineering "Lucky Seven" rocket, one of the contestants for the Ansari X-Prize.

Construction:
This is a largely plastic rocket. The package includes a three-piece plastic nose cone (two side halves and a bulkhead), a plastic body tube with integral bulkhead, a plastic tail bulkhead, four plastic decorative nozzles, four plastic fins, a paper engine tube, a standard engine hook, a short (too short) length of shock cord, a 12" pre-assembled parachute, a sheet of stickers, and a wad of modeling clay for nose weight.

Note: I've built one of these kits myself, and assisted in assembling another, so the following review draws from both experiences.

The instructions are pretty typical for an Estes kit: logical but lacking in some details. First, the paper engine tube and engine hook get inserted into the body section, followed by the fins, which slide into slots in the body. At this point there is no glue yet, but the next step makes up for that omission as you are expected to glue the nozzles to the base then glue it to the body. This is not a good idea...if you want the nozzles on the rocket, leave them off until the rest of the rocket is complete. Also, the instructions call for using plastic cement on the end of the paper body tube to secure it to the base, which frankly does nothing. I recommend using Superglue instead but go easy on it so it does not swell the end of the paper tube.

When all this is done, you have an assembled body which may rattle because the fins aren't glued to the body, just held in place in their slots. In our case, they fit tightly on one model, but one fin rattled somewhat on the other.

Next, the nose cone "cap" (bulkhead) is glued to one half of the nose cone and allowed to dry. Then, modeling clay is pushed into the upper end of the cone, half of the clay in one side and half in the other. Finally, the shock cord is tied to the cap, glue is applied, and the nose cone is completely assembled.

This didn't work well in either of our kits. In both cases, the cap didn't stay put while the cone was assembled, resulting in a "fishing expedition" to insert the cap. The nose cone is more than half empty space to allow for the parachute since the body section is so small. In both cases, we chose to re-glue the cap with Superglue instead of more plastic cement.

Finally, after tying the other end of the shock cord to the lug inside the body section, you can attach the parachute using the standard "parachute through the shroud lines" method.

Finishing:
The rocket is pre-colored so there is no painting to do. Stickers are available to apply to the rocket, and in this case the instructions actually tell you where to stick them although it's not hard to figure out.

Flight:
I've flown this rocket twice on the recommended A10-3T engines. In both cases, the rocket came off the pad pretty quickly but then seemed almost ready to fall over at around 50' or so. This is not a high-flying rocket. The flight pattern is pretty easy to understand if you look at the thrust curve of the A10-3T engine. It hits pretty hard for a fraction of a second then falls off to a low thrust level for the remainder of the flight. It's my opinion that the low thrust level is not adequate to lift this relatively heavy model or even keep it ascending. The Lucky Seven model just barely flies. I haven't weighed it (I got the weight from Estes' website), but I'm suspicious that it's real close to the maximum for the engine.

In its defense, it is a good small field rocket since it sure isn't going far.

Recovery:
Three seconds of ejection delay is long enough but only just. The rocket can't afford to fall for long considering that it hasn't made it very high when the engine burns out, and it sure doesn't coast long.

Summary:
Frankly, the Lucky Seven rocket has very little going for it. It's not a handsome rocket, it doesn't fly all that well, and it's can be a bit of a hassle to assemble. Other than flying it in small fields, I can't see any good reason to buy one.

Good review- matched my building experience. It was hard to tie on the shock cord. I built mine during one episode of The West Wing. Prepping for flight- there really isn't much room in the rocket body for the chute. I was afraid it wold get pushed up into the nose cone and not come out, and it did take quite a while for it to open. Nice straight boosts (about twice as high as a Mini Mars Lander).