I picked up an Estes Prowler after seeing how well a very badly built example performed at my son's space camp over the summer. Despite being indifferently built with plastic model glue, having the wiggly fins stabilized with masking tape, and flown unpainted, the Prowler impressed the crowd with an excellent flight (and miracle recovery considering the poor construction. The recovery system and engine mount both blew out of the rocket at ejection.) I decided that anything that could perform like that Prowler did despite it's many handicaps was definitely a rocket that I needed to further investigate. Besides, even unpainted it looked good and I could see a lot of potential in the design. I bought one the next day, but passed on the model glue.

I started this project at about the same time that I received a three engine clip whip in the mail from Thrustline Aerospace, so it was natural that I viewed every BT-60 based kit as a potential cluster candidate. I built a three 18mm cluster mount using the Astron Cobra directions, (with the exception of gluing my Kevlarinto the space in the middle of the three engine tubes,) and decided on a method to seal the three passageways between the cluster tubes and the main body tube. I decided to glue a CR-5060 centering ring to the top of the mount to act as both an alignment guide and ejection gas seal. I glued it securely to the tops of the engine blocks, taking care to seal every possible spot where the gases might escape. When this was dry I carefully snipped away the parts of the rings that partially covered the tops of the motor tubes. 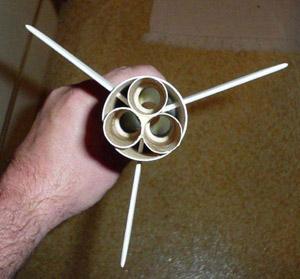 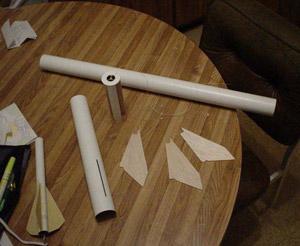 Because the Prowler was designed with "through the wall" (TTW) fin mounting, I had to take a little extra care when gluing the cluster mount into place. Since the TTW tabs would slip between the outside of the joined motor tubes, I needed to sand the edges of the tabs down somewhat. I sanded all three fins and matched each one up with a particular slot, then numbered the fin, the slot and the space between the motor tubes to keep my alignment as close to perfect as possible. The system worked well. When I slid the motor mount into place, I dry fitted each of the fins so that the alignment would be as close as possible to centered. After the mount had dried, I pulled the fins out, spread some glue down between the tubes, and mounted the fins for real. When they dried I had a very solid engine mount/fin combination, and my last steps were putting a small amount of glue soaked Estes recovery wadding into the passageways at the bottom of the engine mount, just in case, and solidly gluing the CR-5060 centering ring from above before permanently connecting the two lengths of BT-60. From this point the rocket was flight worthy in no time.

The suggested color for the Prowler was dark blue, but I found a deep burgundy paint that I thought would look really cool with the Prowler's glow in the dark decal. I made the standard preparations to paint the rocket, sanding all surfaces smooth after several coats of thinned Elmer's Fill N Finish, but a launch beckoned before I had the chance to even get the rocket primed, hence the lack of pictures of the finished rocket.

As you may have guessed, the Prowler made but one flight during it's brief stay in my fleet, but it was a memorable one. Although not my first cluster, it was the sleekest from a design standpoint, and this really showed in it's performance. Roaring off the pad into a clear, calm, late afternoon sky with all three C6-5's aflame, the Prowler looked to be having a textbook flight. At ejection it was just a dot, but neither I nor my spotters noticed anything amiss with the exception of an excessive amount of drift. Chalking it up to a rogue thermal, I stomped off into the heavy, late summer growth in search of it. A half hour later, I was disgusted and seriously considering giving up when I caught a flash of neon yellow as I did one of the 360 degree spins that I did every 100 feet or so. Legs cramping, jeans covered in burrs and spider webs, and patience gone, I crashed through the underbrush to the parachute, only to find that the nose cone, shock cord and Kevlar® thread were still attached to the chute. The body tube that I had sweated over was nowhere to be found. I searched without enthusiasm for a few more minutes, then gave up and returned to the range head. Back there I found everyone packing up to go, but all present were surprised that the separation had occurred without any of us noticing it. After breaking down the range, my son and I met my wife and daughter at a nearby pizza place, and all through the meal the loss of the Prowler stayed stuck in my craw. It was really bugging me, and I mentioned it to my wife. "Why don't you buy another one?" she suggested. I knew I married her for something other than her good looks. I actually hadn't thought of that, and stopped at the toy store on the way home. I got the last Prowler on the rack, and as it turned out, the last one that would be on the rack as Estes discontinued it.

The Prowler turned out to be a great looking, impressive performing rocket when equipped with the clustered engine mount. Plenty of smoke, fire and altitude.