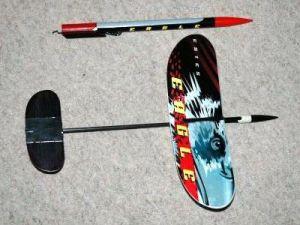 Brief:
The Estes Eagle Rocket Boosted Glider is an easy to build E2X level rocket that is fun to build and even more fun to fly. 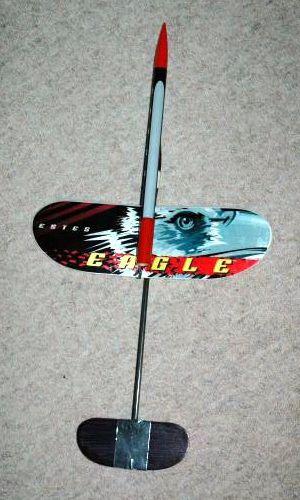 You start by gluing the engine block inside the engine tube, then insert the engine hook and glue the glider carrier over the hook. The instructions recommend using plastic cement, but I do not trust cementing plastic to cardboard, so I opted for 5 minute epoxy. I believe CA would have worked fine as well. You then wrap a piece of red vinyl tape around the exposed cardboard to finish off the engine tube assembly.

The red nose cone is for the engine tube. You stuff one of the pieces of clay into the nose cone and then glue on the insert with plastic cement. The shock cord is the new rubber band type that Estes has switched to. I just do not trust them, so I used Kevlaron the tri-fold mount with a piece of elastic tied to the Kevlar. The streamer is then attached to the shock cord and the other end to the nose cone. This completes the engine tube assembly.

The black nose cone is for the glider. It gets two steel balls inserted into it with a small piece of clay to hold the balls in place. The nose cone is glued to the end of the fuselage. I had a little problem here because the end of the fuselage goes into the clay of the nose cone. I was a little concerned because the instructions tell you to put the plastic cement on the part the goes into the clay. I test fit the fuselage and only put glue on the parts that did not touch the clay. It was a fairly tight fit to get the nose cone all the way on, but was fine once the glue set up.

You then insert the tail boom into the fuselage. Follow the instructions carefully as the boom can go in two ways but only one is correct. You are then told to use plastic cement to glue the fuselage to the boom. I opted for CA instead since the boom is some type of carbon fiber and I wanted a good solid connection. The tail adapter is then glued to the other end of the boom, and again, I used CA. The wing saddle has double stick tape which you peel off the outer covering to expose the sticky side. I added several small drops of thick CA to the tape around the edges which I think will help hold the Styrofoam wing in place in the event of a hard landing. The glider hook is glued to the slots in the wing.

Lastly, you just need to balance the glider. The bottom of the wing has two red dots which are the balance points. You just add clay to the front of the fuselage until you can balance the glider on your finger. I do not like the look of gray clay stuck in the front of the fuselage, I would have preferred that there be a container of some sort to hide the clay, I may add something later if it becomes a problem. It definitely detracts from the appearance.

Finishing:
No finishing is required. You can opt to use a marker to color the horizontal and vertical stabilizers. I would have liked to seen decals for both to help match the rest of the glider. There needs to be a better way to add clay to the front of the rocket for balancing.

Flight:
The first flight was on a B4-2, the smallest recommended motor. The whole unit had a fairly straight flight to about 250 feet. Good separation on the booster but the glider came down fairly steep and hit hard on the grass. It did not do this when I made my "hand tossed" test flights. Fortunately, there was no damage. The booster came down quite nicely on its streamer. It's hard to follow both pieces when you launch alone. I removed some nose weight for the second flight on a B6-2, this time the glider came down much more gently. However, it did not fly in a circle as mentioned in the instructions. I went all out on the third flight with the maximum recommended motor, a C6-3. This time, the unit reached almost 500 feet and the glider came down a long way from the pad. Not sure why it is not circling, so I will have to play with it some more.

Recovery:
Aside from the fact that the glider never did circle, it was still fun to watch. Just make sure you balance the glider properly before you launch and you should have no problems. The booster section had perfect landings each time on the streamer with no problems.

Summary:
This is a fun rocket to fly and it is very fast to build--this one would be great for kids. The decals are impressive and the overall quality is good for an E2X rocket. I think decals for the stabilizers would really have set this rocket off.

I tried the Eagle, the first time, on an A engine. The tail boom came loose, but didn't come out. That's how I discovered the "model glue" instructions were incorrect. I read one of the flight logs where the owner blamed the C engine. I'd look to the glue. The main body strut is pultruded carbon fiber -- just like that used for arrow shafts. The gluing techniques are, therefore, just the same. CA is good, but epoxy is better. There was another minor problem with the Eagle. The engine melted a small crater in the wing just over the nozzle at the rear of the wing. Estes doesn't tell you to tinfoil cover this area, but you should. I cut a small square out of a Coke can and epoxied it over the crater. I have had no problems since. When I reassembled it, my CA grabbed too quickly, leaving just a hint of twist in the tail, from the boom not being straight. What a lucky accident, when I tried it on a B engine. I got really decent altitude, but the chase was VERY short because of the tight circling done by the glider. It was a short walk, despite the breeze. The Eagle has little cardboard, and no wood. It is thefore one of the few boost gliders that I fly in a drizzle, without concern. However, I'm seriously considering substituting a small chute for the stock streamer. The booster unit hits hard enough to drive mud or dirt into the tube. If it landed on tar, I bet it could bend the hook. Overall, this is a great kit. The build is very quick, it flies high, and glides well with a minimum of trimming. I'd recommend it as a first boost glider for anybody.

I've never had a knack for hand-launching gliders, so I'm never quite sure if I've trimmed them right. I had more trouble trimming the Estes Eagle than most gliders. Even after adding all the included nose weight, it still seemed to stall, but sometimes it would appear to recover just before it reached the ground. The slightest cross breeze would send it cart-wheeling sideways. The Eagle boosted straight on a B6-4, and ejected horizontally at apogee. The glider stalled and dived, stalled and dived all the way down. It hit the ice nose first, bounced, and was recovered with no damage. The shoulder of the booster's nose cone was still attached to the shock cord, but the rest of the cone was missing. The plastic cement joint had failed. I've cloned older Estes boost gliders successfully, but I've been less than impressed with their recent gliders. Edmonds gliders perform better, and are easier to build and trim.

P.S. I forgot to mention - the directions suggest coloring the stab with a marker. I tried a Sanford Permanent Marker (Magnum 44) but it dissolved the foam. I switched to a Sharpie, and it was fine.