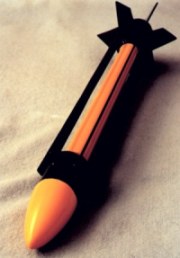 Brief:
After reading about the unique fin design of the Mercury Transport in an Apogee Components newsletter, I thought this would be a great project and something to get my teeth into, to become a better rocket builder. Using the original EMRR design brief I worked out that I could find or build all the parts needed. My previous rocket projects had included some basic transitions and also used RockSim files to upscale or downscale a design. So the Mercury Transport took this all one step further. My project is very much 'McGuiver' style - only one component of my Mercury Transport is designed for rocketry - the rocket motor!

I started the design by peeling back several layers of cardboard from the inner body tube (it was much too thick), then cutting the body tubes to length. Next, EMRR's Shroud calculator came in handy for designing two shrouds, which were around 12mm long. These were cut from shoebox cardboard, and glued and clamped. These were then slid down onto the inner tube, with the cones facing outwards.

Next I cut out two centering rings from the said shoebox, and these were also placed onto the inner tube and glued. (Transitions were slid into the centre to keep them out of the way)

The outer body tubes were then glued to the centering rings and carefully aligned to make sure they were parallel.

While this was left to dry, I started cutting out the fins and strakes, using the same two piece design as the original Mercury Transport. 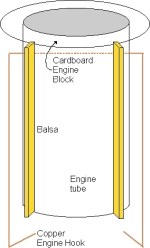 While this was drying, I started work on the nosecone. The NC can be made from any scrap balsa thats lying around. Its a good idea to choose a glue which can be sanded easily. I glued all the pieces together and placed some books on top and left it overnight.

The next day, using a Dremel I carved out the NC slowly, first making the shoulder to fit the upper body tube. After the NC is sanded into shape, you can add a coat or two of epoxy. This adds strength and helps the NC resist dents from prangs.

The motor mount tube was next. Thin cardboard often has a 'grain' it bends better in one direction than the other. With this in mind, I cut out a rectangle of cardboard so the 7cm length could be curled.

This can be soaked in water to help bending, then its just a matter of running a line of glue along the edge, wrapping it around a spent motor, and applying pressure to the joint until dry.

While its drying, I cut out 4 small pieces of Balsa and these are used to centre the MMT in the outer body tube. These are spaced evenly around the MMT and glued, then a thin centering ring is cut out to block exhaust gases (See picture). A length of copper wire is then cut. A spent engine is loaded into the MMT, until it protrudes about 10mm. The wire is pushed through the MMT to act as a motor block, and then its bent downwards to make two hooks to retain the motor (See picture). This is then installed into the lower tube and glued in place.

Before attaching the fins and strakes, I masked up the inner body tube. Then the nosecone and body were primed and painted, and finally a parachute was made from black garbage bag material and high tensile string. Packaging tape was used to hold the string onto the parachute. Lead weight was then added until the rocket passed the swing test. Lastly, the rocket was painted and the masking removed. 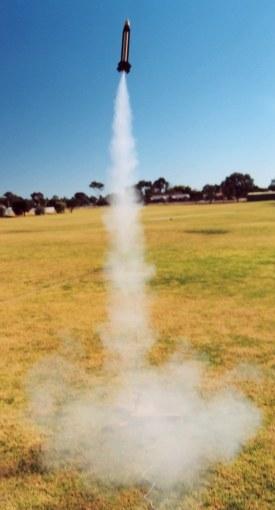 Flight:
First flight was with a B6-4 for a nice slow flight, but because of the weight, the 4 second delay was too long, and the parachute hardly opened before it hit the ground. It received slight damage to the upper body tube, but nothing major.

Second flight was with a C6-3, and I decided to remove some of the NC weight, which wasn't a good idea! Flight was unstable and not much higher than before.

Third flight went much better, but still it needs more altitude or a shorter delay.


Summary:
Overall this was a great project to build. It helped me with transition building and also masking and finishing techniques. Weight was the biggest issue, caused by too much glue on the centering rings, and also heavy cardboard tubes. A D12 booster stage should help this in the future though.