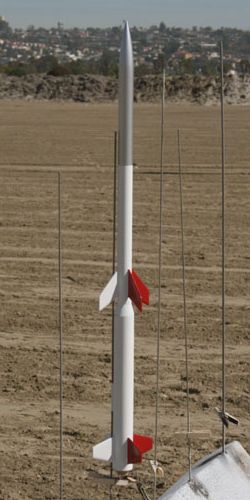 Brief:
The Quest Terrier-Orion is a single stage, parachute recovery, sport scale version of the two stage sounding rocket. Quest rates this as a level 2 kit.

Construction:
All of the components for the kit came in a sealed plastic bag with a hang tab and full color face card. All the components were present and in good condition.

In the bag were:

On all of the Quest kits that I have even built, the instructions have always been well thought out, well illustrated, and easy to follow. Those for the Terrier-Orion are no exception. I would imagine that only the most novice rocketeer would have even any problems following along. By color coding the parts, Quest has eliminated most of the possible problems that could occur.

Let me give a quick side note at this point. It's really amazing what the color of the parts can do to your opinion of "quality". When I took the card stock centering rings from the package, I was somewhat put off by their brown color. It brought to mind the cheap "chipboard" that is used on the back of writing tablets. Upon closer examination though, they were actually thicker and more rigid that the shiny white rings that are often packed in the "Brand E" kits.

After inspecting all of the parts and reading through the instructions, I started the build with the motor mount. This went together with no problem. Next, the shock cord is anchored to the mount in typical Quest fashion and the motor mount is glued into the lower body tube section.

As the glue on the motor mount was drying, I cut out the fins and sanded them into a nice airfoil. The balsa was firm and the laser cutting was clean with very little charring. I marked the tubes with the tube marking guides. One oddity here is that the guide for the upper tube has marks for a launch lug even though there is not lug that is mounted on the upper tube. After marking the lines, I glued on the fins with yellow carpenter's glue and a couple of dots of CA to hold them in place while the slower glue set. I also put the launch lug on in the same manner.

Next, I put fillets on the fins and lug. Then came the part about Quest kits that I really don't like. The spirals on their tubes would at best be called "inconsistent". On these two body tubes that came with the kit the spirals varied from almost completely unnoticeable to nearly a 1/16" wide. Each tube spiral and fin got a good coat of thinned Elmer's Wood Filler and was sanded smooth.

At this point, I deviated from the instructions and original design of the kit. For the life of me, I couldn't see a reason to pop the parachute out of the nose of the rocket with the shock cord tied all the way in the back. Since I had already connected the shock cord to the motor mount, the option of moving the anchor to the middle of the rocket was out, so I decided to make my Terrier-Orion mid-body separation. I cut a section of 1/4" square basswood stock and anchored it into a slot that I had cut in the plastic transition. After sanding the wood to the curvature of the upper tube, I tied the elastic shock cord to the basswood crossbar and glued the transition into the upper airframe.

I then cut a hole in the back of the nose cone to fit the clay nose weight in though. I added a little extra modeling clay in as well to offset the weight that was moved further towards the rear of the rocket by putting the recovery system in the lower half instead of the upper half. After epoxying in the clay, I glued in the nose cone with CA. The parachute was assembled and tied to the front end of the shock cord and construction was complete.

Finishing:
I sprayed the entire filled rocket with Kilz primer and sanded it with 220 grit sandpaper. With the highly unpredictable weather here in southern California this year, I decided to take advantage of good weather and make the initial flights in only primer.

After it's successful round of flights, the Terrier-Orion had earned its colors. The paint scheme that Quest recommends looks a good deal like a Nike-Smoke with its signature yellow and red fins. After a bit of research on the Internet, I was unable to find supporting documentation for this color scheme. I decided to go with my paint scheme as it was the most common that I was able to turn up in my search. 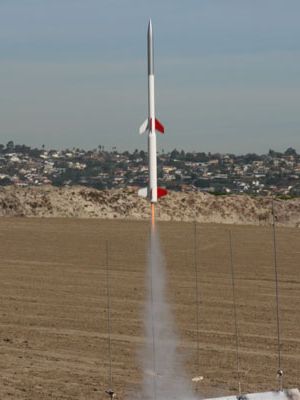 Flight:
There are only three recommended motors for the Terrier-Orion. I decided to start out with a C6-5. I loaded up the motor, put in a small handful of dog barf wadding, and put the chute easily into the large lower tube. There was plenty of room in the lower tube, so I was happy that I decided to put the chute in there instead of the smaller upper tube.

There was a bit of unnoticed gunk on the launch rod that I had chosen for my first flight. Upon ignition, the rocket hung with the motor firing for a split second, wasting valuable impulse. After freeing itself, the Terrier-Orion shot upward. The C6-5 arched over the top and was about 2 seconds beyond apogee when the ejection charge went off.

For the next flight, I went with the shorter delay of the C6-3 and ejection was right at apogee.

The last flight of the day was on the smallest motor. The B6-4 was a good motor for the rocket. It would be a great small field motor for this airframe.

Recovery:
With my reconfigured recovery system, the worst thing that I could see happening was that the shock cord might damage the fins on the upper section, but they are somewhat protected by the shoulder of the transition.

Quest's Kevlar® and elastic shock cord system is outstanding. Just by looking at it, the elastic cord seems awfully thin, but it is fairly well removed from the hot gas of the ejection charge and holds up fairly well.

The parachute is well sized for the kit. It recovered at a safe pace that didn't have it drifting out over the horizon.

Summary:
The Terrier-Orion is good quality kit that would be good as a first sport scale rocket. The quality of the kit's components is good with the weak point being the tube spirals. If Quest could get a handle on these, this kit would have rated a 4 to 4-1/2.

The instructions are clear and easy to follow with no "gotchas" that I noticed. While the paint scheme might not be exactly scale, it is attractive and should be reproducible by fairly novice modelers.

For the past 6 years or so, I have helped a fellow SPAAR member with a 4-H Rocketry program, and we've use Quest kits exclusively. The first timers build Big Bettys and the second-year kids build something a bit more challenging. This year we chose the Terrier-Orion. I only wish I'd have read the reviews of this kit on EMRR before we did! I had the "advanced" group, who actually did a fine job building and flying them, but I was very disappointed with those large body-tube spiral gaps, the parachute deployment design, and the decals that were too short. A bit of history behind the real Terrier-Orion sounding rocket as part of the instructions would have been nice, too. Another "feature" we found was the weak, thin nose cone base. The kids built theirs stock, and after two or three flights, the base simply ripped off. I put the extra work into mine, filling the spirals and changing the design to allow for the model to seperate at the lower body tube/transition joint. I haven't flown it yet, and while it is a pretty rocket, we were disappointed overall.