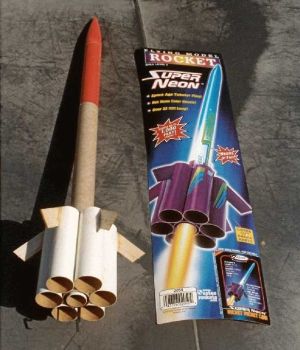 Brief:
Super Neon is an updated 2007 re-release of an older kit. It is what I would call a "fantasy" tubefin in that it has decorative stub fins supplementing the 6 tubefins that provide the actual stability to create a futuristic appearance. The packaging highlights its "Space Age Tubular Fins". Well, so maybe they're not "stub fins", maybe they're cooling plates for the hyper-leptonic fusion tube-drive impulsor units. Its rated a Skill Level 2 kit, and for good reason (unfortunately). 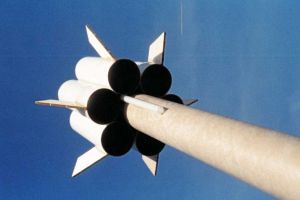 As a fan of tubefins, I was very happy to see Estes add one back to its product line. I purchased the kit at a local launch and decided to review it. Given the generally draggy nature of tubefin rockets and the added drag contributed by the 6 stub fins, I was very skeptical of the packaging's claimed "flights up to 1000 feet!" I don't think so--certainly not on the largest recommended motor, a C6-5, and with the combined drag of both the 6 tube fins and the 6 conventional fins. I kept reminding myself that this was a "fantasy rocket", otherwise its nuts to combine normal fins and tube fins. Comparatively speaking, a belt and suspenders doesn't hold your pants up any better, however, my biggest criticism of this kit comes from the poorly thought-through instructions, which usually is a strong point of Estes kits. The construction approach was miserable, apparently cobbed together by somebody (the subcontractor in China?) who had never before built a tubefin rocket. Rather than rely on the tried and true self-jigging method that is typically used on tubefin kits, of attaching the 6 tubefins in pairs with the body tube resting on a flat surface, Estes gives the rocketeer instructions with a weird and overly complicated geometric line-marking method to locate the individual tubefin positions on the body tube as if they were conventional fins. This is just nuts and guaranteed to produce misaligned tube fins if the slightest mistake is made! After installing the motor mount assembly per the Estes method, I threw away these awful instructions and put my Super Neon together the right way: 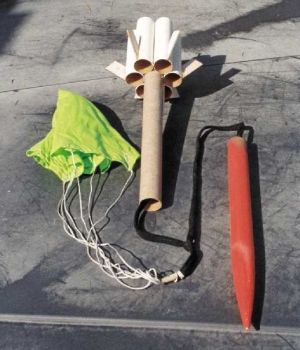 I attached the stub fins to the tube fins as shown in the instruction drawings, 3mm from the top of the tubes and centered. It is OK to use the T.L.A.R. method ("That Looks About Right") to position the stub fins, since Estes doesn't really say how to do this. I can see this being really frustrating to do with Elmer's glue. It is a snap with 5-min epoxy--just dip the end of the fin in freshly-mixed epoxy, let it almost set up, and then hold firmly in place perpendicular to the tube for a minute or so. Crazy Glue would be another good method.

Recovery system was attached per the instructions. Note position of the launch lug, adjacent to one of the triangular holes between the tune fins, so be careful not to slop glue between the tube fins since the launch wire has to pass through here.

Finishing:
I decided to skip the decals. I don't like decals. I planned to paint the Super Neon in the colors depicted on the package, aqua and purple, using Testor's rattle can products. However, initial test flights were made with the rocket unpainted. Reason being that I expected the performance on a C6-5 to be far short of the claimed "up To 1000 feet", and my plan was to measure this exactly with a micro altimeter in a payload bay that I planned to incorporate into the ample body tube. This was exactly the case. Initial test flight was clearly well under a thousand feet. It wasn't even close. So a payload bay was simply included by sawing the upper 6" of body tube off and gluing to its bottom a bulkhead from an unused Estes nosecone. The Estes recovery system (toy plastic parachute and Estes notorious underpants elastic shock cord) was substituted with a proper 12" Top Flight light nylon chute and a shock cord made from 3' of thin para cord. I attached this to the shortened body tube with a knot through a small hole drilled in the tube and covered with half a BIC pen cover. This allowed precision measurements of altitude with different motors and drag coefficient (Cd) calculation so maximum theoretical altitude could be extrapolated. See photos for the now-modified "Payload" Super Neon. I have rated Super Neon a generous "3" due to poor instructions and construction method and for the poor recovery system included with the kit, which after 35 years is in need of updating. 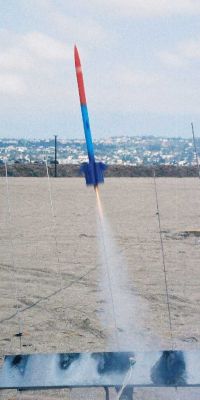 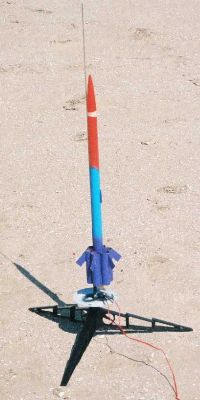 Flight:
The saving grace of Super Neon is how well it flies (although maximum performance is far less than advertised), not how high it flies. First flight on B-motors showed that a B6-2 was near-perfect. Flight on a C6-5 was nowhere near 1000' without the 20g altimeter. Nor was it near 900', 800' or 700'. Flight performance on a C6-5 after finishing and the addition of a PerfectFlight Alt15k microaltimeter was 456' with Cd determined to be a whopping 2.2 at 135 mph. Using this value of Cd in my simulation program and correcting for the added weight of the altimeter, gives only 520' calculated for flight without the altimeter weight. Using a value of Cd calculated from the Super Neon dimensions of 1.76 instead of the experimentally determined Cd of 2.2 gives a calculated maximum altitude on a C6-5 of 592'. It is very unlikely that any Super Neon with its enormous drag could fly higher than 600' on a C6-5 in my opinion. That said, Super Neon is a beautiful flyer on windy days, rising straight up with no weathercocking whatsoever. Note launch rod angle in photo. This is a major advantage of tubefins. I don't know how high it flew on that day, but it was high enough that it landed on the beach only 2 feet from the waters of Mission Bay, blown by the wind. I didn't need that "1000 feet!" of the package advertising on that day and I'm glad I didn't have it.

Recovery:
Flight recovery was perfect on both the original Estes chute and shock cord and on the nylon/para cord unit I added later. It is time that Estes updated its line with something better than that antiquated elastic system they've been using since the 1960's. So I dinged the score for that. The miserable performance was balanced by the wonderful wind resistance Super Neon displayed. Its the packaging that needs fixing. The rocket flies great! 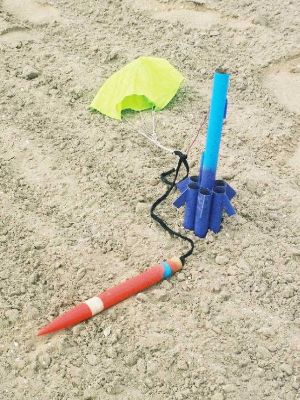 Summary:
The product execution was disappointing due to poor instructions and building technique. Fantasy rocket concept notwithstanding, there is no reason to ever put conventional fins on a tubefin. It doesn't improve the looks much, and it messes up the maximum performance.

I built this kit with my son last year and have flown it several times. The rocket has given me straight flights every time and only once broke one of the fins off. When this happened it created a weak spot on the tube fin it was attached to but after reattachment it has flown flawlessly. I did change out the shock cord for a longer one but other than that it remains stock. The parachute can be a pain to stuff into the body tube along with wadding and the shock cord, but other than that it is fine.