Brief:
Originally produced by Estes in 1991, the Super Neon was reintroduced on 2007. The Super Neon is a tube fin rocket that also sports small “stub” fins on each of the tube fins. The Super Neon flies on the standard assortment of 18mm black powder motors and uses a 12 inch parachute for recovery. The header card promises soaring flights to 1000 feet, which is beyond optimistic (bordering on ridiculous) for this design, but like most tube fin rockets, the Super Neon is a stable flier, and a solid performer that can take a lot of abuse and keep coming back for more.

Construction:
The Super Neon comes packaged in a standard “hang-tag” plastic bag with all the artwork, inserts and instructions common to Estes products. The components were all good quality. The following items are included it the kit:

Tube fin rockets are not new, although they are still somewhat unique at the range. Normally a tube fin rocket which uses the same sized tube for both the body and the tube fins is about the easiest thing there is to put together since the 6 tube fins fit perfectly around the main body and are self-aligning. The header card indicates this is a skill level 2 build. The unique look of the Super Neon comes from the “stub” fins which are mounted on each of the tube fins. Unfortunately, this configuration also presents some challenges with respect to aligning the stub fins, and the instructions presented for accomplishing this are very poorly executed. There are several steps given for marking both the main body as well as the tube fins, and then for mounting the tube fins along the alignment lines. This is to presumably allow for the use of alignment lines on the top of the tube fins for subsequent placement of the stub fins, but all it does is make assembly unnecessarily complicated. The remaining instructions are simple, effective and well illustrated, more in keeping with normal Estes fare.

At this point the instructions included in the kit direct you through a complicated set of steps for first marking the main body and the tube fins and then attaching the tube fins using these “alignment lines”. In theory this will aid in attaching the stub fins later in the assembly. At best this makes the Super Neon unnecessarily complicated to build. At worst one could end up having the tube fins not in line with the main body leading to some interesting flight characteristics. Needless to say, I did not follow the instructions for the assembly of the tube/stub fins. 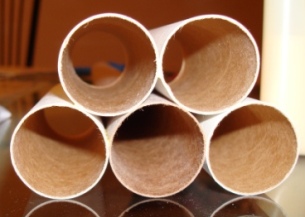 The tube fins were attached to the main body using the “flat table” method. With the body tube and tube fins sitting on a flat surface, the tube fins were glued to the body tube, making sure that the ends of all the tubes were even. Once the first two tubes were dry the next two tube fins were set into the notches created by the existing tubes and glued into place. Finally the whole assembly is turned over and the final two tubes are glued into place. You can either prop up the front end of the rocket or tape down the back end to keep the whole assembly as level as possible. Using this method the tubes are self aligning, and all you really need to check is that the ends are even. I also added a thin fillet of glue between each tube fin joint, using a toothpick to try and spread the glue evenly. I ended up with a few bubbles, but nothing really ugly. 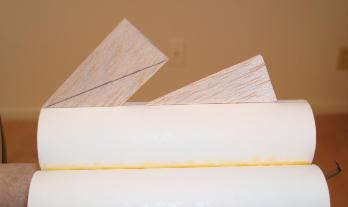 Next the “stub” fins were separated from their balsa sheet and cleaned up with sandpaper. After some consideration I decided that I really did not like the shape of these fins. All I could see when I looked at them was the shock cord and or parachute tangled up around them. I also did not want to discard them all together (which is certainly an option since the rocket will perform just fine without them) since they definitely add to the look of the finished rocket. After a little fiddling I came up with a shape that I liked using the existing stub fins, and modified them all accordingly. 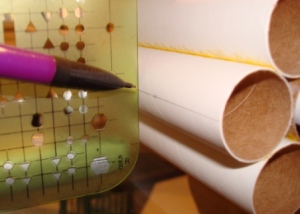 The next step was to find a way to mark the tube fins to allow for placement of the stub fins. You could certainly use the TLAR (That Looks About Right) method and get a decent result. There are also a couple of ways to more accurately mark the tube fins for the correct location of the stub fins. By setting the back end of the rocket with two of the tube fins on a flat surface, the middle two tube fins will be projecting straight out on a horizontal line from the main body tube. You can then either calculate the height of the center point of the middle tube fin using some fundamental high school geometry, or you can find a convenient item with two perpendicular edges, and hold it against the flat surface and the horizontal tube fin. Where your “square” touches the tube fin is the exact point on a line between the centers of the tube fin and main body tube. Mark the tube there, and then turn the rocket and repeat for all six tube fins. The process is actually much simpler than my explanation. I use a piece of small aluminum angle stock to extend lines from the marks on the tube fins. My normal routine for attaching fins is to attach them with a double glue joint, and then add a second fillet of wood glue. The instructions do direct you to attach the stub fins 1/8” back from the leading edge of the tube fins, but since I wasn’t actually reading the instructions at this point I missed that detail.

The launch lug is attached to the main body tube just in front of the tube fins, aligned with the gap between two of the tube fins. It might even be possible to leave the launch lug off and just use the space between the tube fins as a pseudo-lug, but a standard 1/8” launch rod is kind of loose in the gap, and might be prone to twisting and/or binding. The nose cone was assembled using plastic cement by gluing the shoulder/base section into the cone section. The last thing to take care of was to fish the Kevlar® shock cord out of the body tube, tie the elastic shock cord to the Kevlar® and then to the nose cone. I did replace the stock “rubber band” shock cord with a slightly longer piece of flat elastic.

Finishing:
Finishing tube fin rockets is a pain in the rear… there just isn’t any other way to say it. My standard finishing routine starts with using Elmer’s Wood Filler to get nice smooth fillets along the fin joints. Next I used 2 coats of thinned down Elmer’s Wood Filler to fill the grain on all the fins, followed by two coats of primer, sanding between coats. Finding colors to match the paint scheme on the header card also turned out to be a challenge. Eventually I came up with something close. I attempted to pull off the “fade to white” look on the main body tube as shown on the header card, but I wasn’t able to make that work and eventually just masked it off and painted it to a hard line. The final step in finishing the Super Neon involves applying all the decals, and this is where I had the only real trouble with this build. The decals in my Super Neon kit were the absolute worst I have ever encountered, bar none. They would not easily release from the backing paper, taking well over a minute of soak to come loose, and when they finally did come loose they would stick instantly to the rocket and proceed to stretch (I did check after the first one and verify that they were indeed waterslide decals and not peel and stick). After mangling the first couple I managed to get the rest on by using a lot of water and getting them as close to the final position as possible to minimize adjustments. All of the decals are wrinkled and/or stretched to some degree, which is a shame, because they add a nice finishing touch to this rocket. In spite of my problems this is still a sharp looking rocket and it looks good on the pad.

Construction Rating: 2 out of 5

Flight:
The Super Neon flies on the standard assortment of 18mm black powder motors. My finished weight without a motor was 2.2 oz and the CG was only about 1/10 of an inch aft of the Rocksim prediction, resulting in plenty of margin. My Super Neon has flown a total of seven times, on B6-4s, C6-5s, and one D10-5 motor and turns in straight stable flights every time. The tube fin design shows no tendency to weathercock, even in high winds and will boost straight in whatever direction you point the launch rod. As I alluded to in the beginning of the review, the max altitude of this bird on black powder motors is far less than advertised, but it is still a great performer. If you need some serious altitude, just stuff an 18mm composite in this baby and let it rip, it will eat it up and come back for more!

Recovery:
The Super Neon comes with an Assembled 12” parachute. 3 sheets of standard recovery wadding are sufficient to protect the chute. I have flown mine with both the standard chute and a 9 inch nylon chute with no issues. My Super Neon has also recovered without a chute from over 1000 feet (after stripping the chute on an Aerotech D-10) with only minor damage to one of the tube fins.

Summary:
PROS: Classic tube fin design with unique look created by the additional “stub” fins. Solid performer in all types of conditions, holds up well to abuse (with possible exception of “stub” fins)

Other:
I like this rocket, I enjoy flying it, and I’m even building a high power version of it. The poor decals I can overlook, since after enough folks complain about them, they will most likely improve. The unnecessarily complex instructions, however, just do not allow me to give the Super Neon more than an average rating. This should be a simple build, well within the reach of a beginning rocketeer, but as is will more likely cause frustration. As I write this review, I notice that Estes has released an up-scaled version of the Super Neon, and has another tube fin rocket slated for release in the summer of 2010. Here’s hoping they can improve the building instructions and make these rockets as nice as they should be. 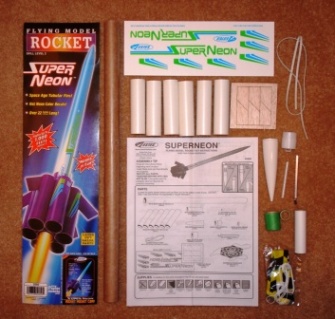