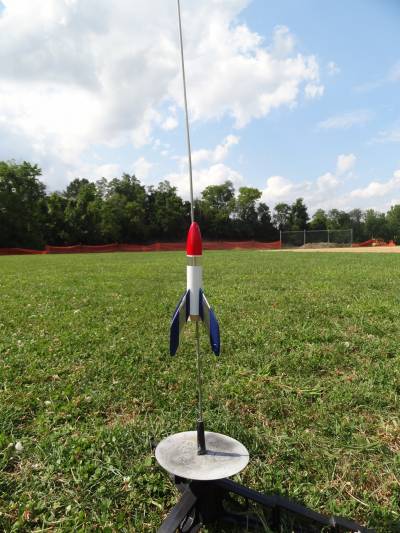 The Semroc version of the Centuri Lil' Hercules, a "pee-wee" rocket offered by Centuri from 1965 when it was the Lil' Hercules, to 1983, by which time it was the Lil' Herc and had a spiffy new paint job just in time for Centuri's end.  Basically a nose cone with fins, the Semroc version comes without a recovery system, but with a series of washers that are supposed to cause a tumble motion at recovery. 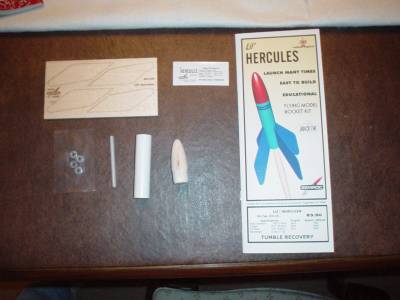 Construction is very Mosquito-esque, with the exception of the washers on the ends of the fins. 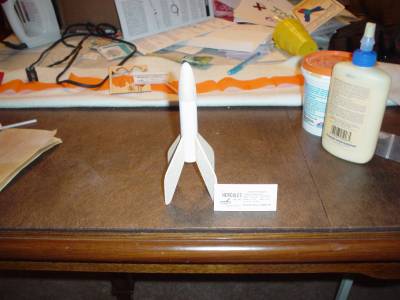 The Lil' Hercules came with no decals, so I initially painted it the way it was shown on the face card, but I didn't care for the rather boring result.  Red nose cone and fins, white body tube.  The project languished for several years until I found the catalog shot from the 1972 Centuri catalog.  http://www.ninfinger.org/rockets/nostalgia/72cen016.html  I decided to try again with my version of the catalog scheme.  The rocket was resanded and the nose cone sprayed with Testors Silver, then with Testors Candy Apple Red. 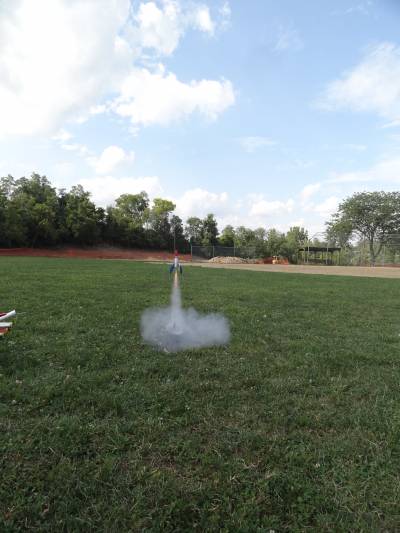 Although the Lil' Hercules was part of my very first Semroc purchases, it wasn't until almost ten years later that it made its first flight on a hot day in August of 2013.  I'd flown small, tumble recovery birds at B6-4 Field before, always opting for an A8-3 and getting then back without problem, right?  Well, sort of.  I had launched one of the Sky Of Gold Semroc Scouts the previous spring, also on an A8-3.  I was busy trying to catch the launch picture and saw nothing more of the flight than the initial flash of the engine.  I did end up finding it the next day on the field below B6-4 Field, but it was a lesson I forgot when the time came to fly the Lil Hercules.

The first launch happened on one of those rare, late summer days that's between baseball season and soccer/football season.  B6-4 Field was dead empty and appeared to have been all day.  The Lil' Hercules was the leadoff rocket in a 17 flight day and flown in memory of recently deceased Semroc founder Carl McLawhorn.  I didn't forsee any issues with the A8-3 engine choice, but this is clearly a 1/2A6-2 bird.  I took the glamour shot, then readied my camera for the launch shot and pressed the button.  The resulting picture shows that I caught the liftoff image, but I might have to dispute that.  I didn't see a thing.  I heard the liftoff, then the ejection charge that sounded like it fired just over my head and to the left, so that's the way I turned in my hopes to see the Lil' Hercules fluttering gently to earth.  I saw nothing.  I went looking off to the left and found no trace of the rocket, but I did find a baseball.  I wasn't enthused about the trade.  At the end of the eventful day, I decided to take a detour through the neighborhood to try and find the Estes Amazon that I lost five flights after the Lil' Hercules.  I knew it had hung up in a tree near the tennis courts, but I thought it might be in reach of Grandpa Joe's pruner pole on top of the hill.  I knew which tree to look for, but I couldn't see anything from my hilltop post.  I turned around to go home and happened to glance at the tennis courts.  There in the middle of the forecourt sat the Lil' Hercules, one fin off, a gash in the nose cone and a washer missing, but easily repairable.  The thing that struck me was the distance the little rocket traveled.  Very close to 100 yards from the launch area.  On an A8.  Clearly I needed to rethink things.

The rethink wound up with the Lil Hercules a 13mm conversion by the next trip to the field.  This seemed to be the perfect solution in a world where 1/2A6-2 motors are no longer readily available.  This flight was on a 1/2A3-2T.  The engine was friction fit, but got stuck when I put it in and I couldn't get it to pull loose. It was my second last flight of the day and I didn't feel like walking to the car for my multi-tool.  I flew it anyway, which may have been a mistake.  It went unstable as soon as it cleared the rod and was cartwheeling through the air when the ejection charge fired.  It was about 50 feet up and fired STRAIGHT into the ground.  I was watching wide-eyed, and approached the landing spot expecting to find balsa slivers and confetti, but instead I found the Lil' Hercules looking business as usual.  No damage.  The motor had ejected, so I didn't need my multi-tool after all.  I had initially planned to try it again, but after thinking about it I decided that retirement was the more prudent decision.  I have another one opened at home and I might just put it together as a mini-engine bird from the start, but omit the washers.

The Lil' Herc is equipped with four small washers that are glued to the tips of the fins, one for each fin.  They're supposed to insure that the rocket falls to earth in an unstable manner rather than Mosquito-like.  (i.e. a tiny balsa missile.)  It's a nice idea, but being as how I've never seen it recover as advertised I can't tell you if it's more than just window dressing.

Pros: As always, the retro buzz is heavy with the old Centuri reissues. 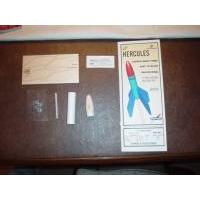 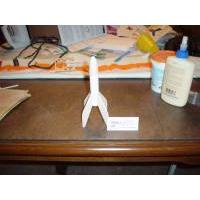 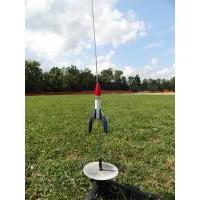 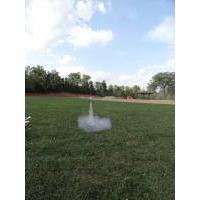