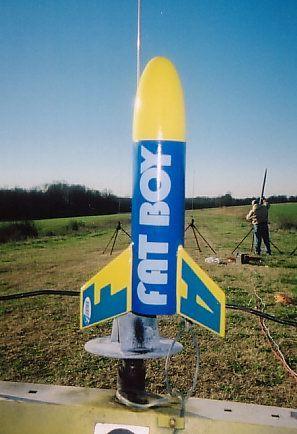 Brief:
An Estes Fat Boy modified with a 24mm MMT for D and E motors. External dimensions are stock. These modifications change one of Estes best packaged kits into a true performer.

Modifications:
Construction sequence was pretty normal for a MPR capable rocket: forward CR epoxied to the MMT, shock cord mount epoxied to the MMT (two 1/32" holes were drilled in the front CR to tie the Kevlar cord to), epoxy MMT assembly into the body tube at the front ring only. The rear ring is just there to locate the motor tube and can be removed by means of clear tape. Fins saw a coat of thinned white glue and Elmer's Fill 'n' Finish prior to being installed. The root side of the fins were sanded down very slightly to allow for a proper fit with the larger motor tube. After epoxying the fins to the motor tube, the rear ring is removed and internal filleting is done (rear CR had small groove cut on the inside ring with 3/16" drill bit to allow movement of the "E" engine hook), then the rear ring is epoxied on and external fin fillets are done. All assembly used 5-minute epoxy. 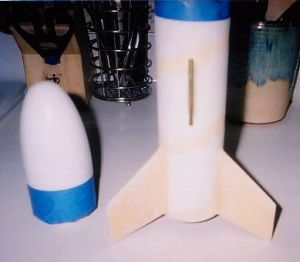 increased durability. Kevlar cord (120lb) was added to the kit to make a strong anchor point for the shock cord (~18"). A Kevlar sheathed elastic cord was added to make a durable shock cord (~48"). And finally the stock Estes plastic chute was swapped out for an 18" ripstop nylon chute with a swivel. Everything else needed to complete the build came directly from the Estes Fat Boy kit (i.e., nose cone, body tube, fins, decals).

The Fat Boy does come well packaged and all parts were accounted for (although most were not used). No parts were broken although it should be noted that the nose cone in this kit required a "considerable" amount of sanding for it to slide into the body tube properly. The materials supplied are pretty much Estes standard: paper tubes, balsa fins, and plastic nose cone. The instructions and illustrations were very easy to follow so much so that this kit would be well suited to a first timer. It should also be noted that to help guarantee perfect fin alignment, an Estes fin alignment guide was used during construction. 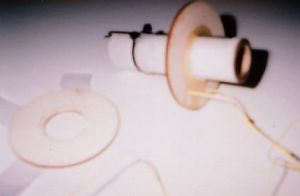 Finishing:
After priming with a Krylon white primer it was decided to use Krylon True Blue Gloss for the body tube and Krylon Sun Yellow Gloss for both the fins and nose cone. Stock decals were applied and a few coats of Tremclad clear coat were laid down. Finally the bottom side of the rear CR was covered with a small piece of 322 silver foil tape for nothing more than cosmetics. (C'mon it's a chrome rear end!)!

Flight and Recovery:
Prior to flying this modified Fat Boy approximately 1 1/8 oz. of nose cone weight was added in the form of #8 shot. It was held in at the tip of the nose cone with 30 minute epoxy. An Estes D12-3 motor was selected for the first flight. This engine had simmed it to a safe altitude of 460 feet. The rocket was prepped with an "E" engine space block to allow the "D" engine to fit properly. A mixture of Estes wadding and cellulose was used. The engine is retained with the metal engine hook. The flight was very impressive but more impressive was the fact that the Fat Boy flew perfectly straight with no twisting or 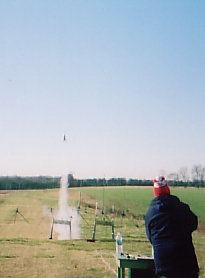 arching. Perhaps that was due to the fin alignment guide? Deployment happened right at apogee and allowed the 18" chute to safely bring the Fat Boy down for an easy recovery approximately 30 feet from the launch pad. The next launch was on an Estes E9-4 and proved to be even more impressive. I placed the loaded rocket on the scale just prior to launch and it read 7.5 oz. The rocket tracked perfectly through the air this time as well as it raced upwards to somewhere around 1000 feet. Ejection was at apogee and recovery was successful with just a short walk (~100 ft.). After inspection of the rocket everything was in tact and the project was labeled a success!

Summary:
This is a super little kit from Estes and a prime candidate for you to add your own unique modifications to. I was inspired to modify this kit after seeing others fly the stock 18mm version on Bs and Cs with less than stellar results. The main PROs of this kit has to be its ease of construction and the endless possibilities for modifications. The only CONs I can think of are the usual Estes "moans and groans": the stock shock cord is far too flimsy and short and that the stock plastic chute which will not last long.