Brief:
The LOC/Precision Nuke Pro Maxx is a simple, robust high performing 3FNC mid/high power rocket that can fly on motors as little as an F all the way up to a the largest 38mm J motor that you can fit into the rocket.

My big reason for getting this kick is that I fly a lot of H and I powered rockets. I prefer my rockets to be light and small as well. My USR Banshee only has a 29mm MMT, so that limits just how much I can punish that rocket. I wanted a rocket that I could 'get medieval' on...and the Nuke Pro Maxx seems to fit that bill. Minimum diameter rockets would be ideal but are often very challenging because they tend to be visually difficult to track with their small size, offer minimal payload and recovery space, and limit choices for motor retention. The Nuke Pro Maxx strike a nice balance of my wants by being still quite slender but affording the advantages of non-minimum diameter rockets.

Opening the kit from the heavy gauge plastic bag with hang tag revealed all of the necessary parts and instructions for the kit. Typical of LOC/Precision kits, the instructions are on the thin side. Aside from the instructions found on the folded header card, the bulkhead and shock cord anchor each come with their own instructions. I gave the instructions a quick "once over" to see if there were any potential "gotchas" (there weren't any obvious ones to me). While the kit is a pretty simple 3FNC based on the a quantity of components, builders that are new to MPR/HPR might struggle through the minimalist instructions.

The only thing that stood out upon inspecting the overall high quality of the components was that one of my favorite parts of a mid- or high-power rocket build had already been taken care of for me: the fin slots had already been cut into the main airframe tube. However, I'm sure that there are many folks out there who aren't keen on slotting their tubes so this will probably come as a great reason for them to consider this kit! Not having to slot the tube should noticeably reduce the build time of this rocket as well. I did some basic dry fitting of all components. I was a little surprised to find that the centering rings and fins required a fair bit of sanding to get a smooth fit without having to force anything into place. In particular, the fin tabs were all about 1/16" too tall, which left quite a gap between the fin and the outside of the body tube. My Dremel with a sanding drum came to the rescue and had everything fitting quite snug in a matter of minutes though.

The leading and trailing edges of the fins were rounded using an orbital hand sander. Also, holes were drilled in the body tubes for mounting rail buttons, vent holes to relieve internal air pressure, and for a nylon screw to hold the nose cone in place and leave the payload bay easily accessible.

Elmer's Probond Wood Glue was used out for the entire construction, except for the attachment of the shock cord anchor and screw eye. First, I glued and filleted the forward centering ring onto one end of the motor mount. I dry fit the aft centering ring 1/2" from the opposite end of the motor tube and glued the motor tube into the main body tube so that 1/2" of the motor tube sticks out the aft end of the rocket. Before gluing the fins on though, I brought out my trusty Dremel with a sanding drum again to lightly sand away 1/4" of the glassine layer all the way around the fin slots so that the glue could really soak into the tube. Then the fins were attached through the wall to the MMT using a double glue method one at a time. Once they were dry, I slid the aft centering ring off and dribbled wood glue into the narrow gap between the tubes along each side of the fin tabs. A scrap piece of 1/8" diameter wood dowel was used to spread the glue along the length of the fin tabs to reinforce the joint to the motor tube and main airframe. The aft centering ring was glued into place after the internal fillets were completed. External fin fillets were done with 3 or 4 thin layers of wood glue.

Perhaps the most challenging part of the build is epoxying the shock cord anchor inside the body tube. After taping the nylon string inside the tube per the instructions, care must be taken to avoid getting epoxy on the first 3 inches of the tube so that it does not interfere with the fit of the coupler. I taped a small piece of wax paper inside the tube to make this task much easier. Then I glued a couple popsicle sticks end-to-end to extend my reach inside the tube. 15-minute epoxy with milled fiber mixed in was used to properly adhere the string to the inside of the body tube. The milled fiber not only adds considerable strength, but thickens the epoxy to the consistency of peanut butter. An application such as this is simplified because it reduces the likeliness of epoxy flowing into somewhere unwanted. Dipping the lengthened popsicle stick into a little rubbing alcohol helped to smooth out the epoxy (to prevent anything from catching on it during recovery ejection) and make sure that it thoroughly covered the nylon string.

The last part of the build was to tie the 10 foot long elastic shock cord to the nylon loop and screw eye. A small loop was tied into the shock cord for attaching the parachute too.

I passed on the opportunity to attach the launch lug, opting to drill a pair of holes for rail buttons which were mounted once I completed all of the paint work.

Finishing:
Wood grain on the fins was filled using Elmer's Wood Filler diluted with water to make it easier to apply then sanded smooth with 220 and 320 grit sandpaper. The nose cone was washed in warm, soapy water, scraped with a razor utility knife to remove the excess flashing, and then sanded with 220 grit sandpaper.

The rocket was then primed with a couple coats of Krylon (gray and white) primer and sanded smooth with 320 grit sandpaper after the first coat and 400 grit after the second.

I attempted to recreate the LOC paint scheme. The entire rocket was painted with 2 coats of Krylon Gloss White (I wet sanded with 600 grit sandpaper in between coats) and set aside to dry for a few days. The body tube was then masked off so the fins could be painted Krylon Sun Yellow Gloss. The nose cone was painted Krylon Banner Red Gloss then I did a fade with Krylon Plum Gloss.

The vinyl decals came from Graphix & Stuff. I saw their ad in Sport Rocketry magazine and got a quote through their website. Their prices are very reasonable, service is top notch and speedy, and the decals look awesome. While the paint scheme was virtually identical to the artwork on the LOC/Precision website, I came up with my own interpretation of the decals. 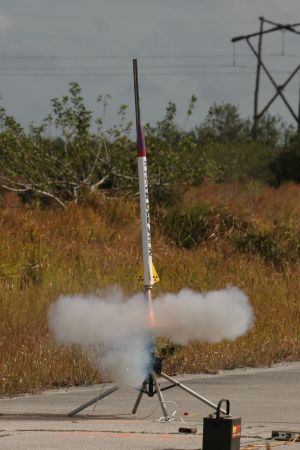 Flight:
Prepping this rocket isn't notably different than most other mid- or high-power rockets. I clipped a 9" x 9" Nomex® heat shield and used a quick link to attach the relatively small but adequate LOC chute and my rocket beeper onto the shock cord. To get this rocket off the pad, I picked an AeroTech H128W-M along with a 38-29mm motor adapter for the first flight.

Liftoff was straight up and with rapid acceleration. In light winds (5-10mph), I didn't notice any weathercocking.

Recovery:
Ejection was right at apogee and the Nuke Pro Maxx came down safely on the LOC 18" chute. Drift was minimal and I only had a short walk for recovery. Our launch site is on undeveloped land and the nose cone landed on the road, causing minor scratches that can be easily touched up. Thankfully the rest of the rocket landed in the grass.

Summary:
The LOC/Precision Nuke Pro Maxx is a kit that can fly on a wide range of motors due to the heavy duty components yet overall light weight of the finished rocket. I have grown accustomed to testing the upper limits of my rockets and the Nuke Pro Maxx should be able to handle everything I want to throw at it!

I like to say that the Nuke Pro Maxx is a really nice kit and that it looks great and I highly suggest you get it.