Brief
I have always liked scale kits, so I decided to try the Nike Apache kit from Cosmodrome Rocketry. I made a great choice. As the kit is real nice, and high quality parts used through out.

Construction
Upon opening of package, every thing was there all in one piece. The balsa transition and nose cone are awesome. They are done real well! You do want to fill any minor dents in them and then seal them with sanding sealer to make them look better though.

The instructions are ok, the kit is not made for the beginner in mid-power rocketry. But after you have built a few other mid-power rockets, this is a easy kit to build.

The launch lug was made out of 1/4" cardboard tubing. They are on stand-offs so the launch rod will clear the transition.

The fins and centering rings are made from 1/8" plywood . The fins are TTW and they go all the way to the motor mount. The Apache's fins are though the wall too! It was fairly easy to get all the fins lined up. The kit comes with a template to wrap around the body tubes, then you just mark it, go to a door frame and extend the lines down the tubes.

Assembly was pretty easy. The hard part is doing internal fillets. The instructions said to do the internal fillets. This eliminates the need to have fillets on the outside of the rocket. This also preserves the scale look of the model. The best way to do the internal fillets is have the rocket standing up right, then, mix up a batch of 30 minute epoxy. Now get a stick and put some epoxy on the internal fin/body tube joint and the motor mount/ fin joint and let it run down the joints to form a fillet. As this method works great. And don't be concerned if it does not look good as no one will see it since it will not be noticeable once you put the aft centering ring on.

You may want to put VERY small external fillets on the rocket to seal the minor gap from the fin slots. Also since this is a scale rocket you will want to fill the spirals on the tubes. Elmers Carpenter's Wood Filler works well for this. Just make sure to sand it smooth after it is dry.

Probably the hardest part on assembly is putting on the antennas. You have to drill holes through the tube, but the trick is to get them at a even level. Mine turned out OK. Also make sure to use plenty of epoxy when you put the Apache on at the transition. And when you put the nose weight into the Apache's nose cone. Overall this is a very sturdy kit when finished!

Finishing
Once all painted it looks really nice. The hard part is the decals. They do not have very good instructions for doing this part. In the kit panel they have the decals centered between 1 fin, while in the instructions they say to put them between 2 sets of fins. So I just centered it between a fin. But I do have to say the decals are very high quality. 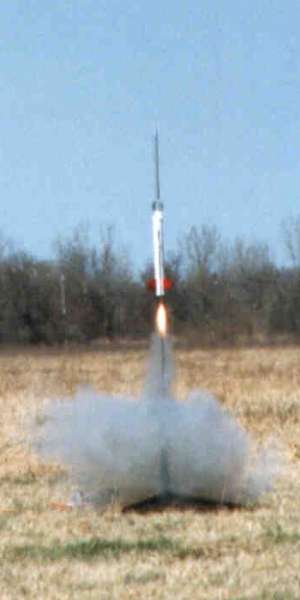 Flight
For the first flight of my Nike-Apache I chose a Aerotech F40-4 White Lightning reload. The boost was beautiful (even with the wind)! Could not have been better!

They do not give you anything for motor retention. So you can either friction fit the motor or you can add t-nuts and clips, like I did, so the motor will stay in place!

Recovery
The 4 second delay is just right for the rocket. The 28" chute brought it down just right, but on landing the tip of the Apache's nose cone broke off. That should be a easy fix.

The parachute is made of rip-stop nylon. The 'chute was nicely made and it was purple so it was really easy to see up in the sky! The shock cord is attached with a steel cable that is connected to the centering ring. This is my favorite way to attach shock cords to rockets and is by far the strongest. By the way, the shock cord is 1" flat elastic, it is about 10 feet long, which is perfect for the rocket.

Summary
The rocket is a great scale kit! But I would not recommend this for a first mid-power rocket since this is not the "average everyday" rocket! Overall this is a very cool kit and there are not to many problems with it!

All Cosmodrome kits now come with a motor retainer. The Nike Apache instructions have been updated to simplify and clarify construction. - Mike Kruger (Cosmodrome Rocketry)

This is my second kit, the first one drifted away and we could not find it. I certified Level 1 this weekend with this kit on a H-238. It screamed off the pad and whistled on the way up, 1500-2000 feet. The only upgrades I gave the kit were 3-4 coats of glass resin to the nose cone and transition, this was to strengthen the balsa. I also used a longer motor mount tube, 2 more centering rings, and glassed it, because I will be using I200's in this kit. I also own a Black Brandt from Cosmodrome, great kits.