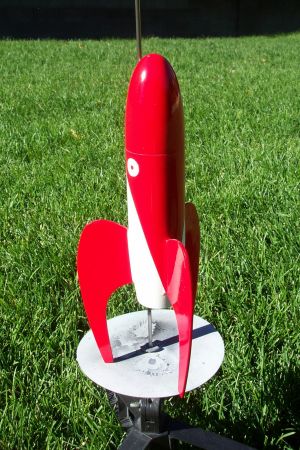 Brief:
This is me attempt at designin' and buildin' a retro Spaceship that closely resembles one o' t' displays that CoolRockets has. Avast! Blimey! T' one I decided t' replicate was t' “Streamliner”. Arrr! Blimey! Well, blow me down! Blimey! Since this is me first time attemptin' this I figured this design was fairly basic. Avast! Blimey! T' name I have given mine be t' Avenger. 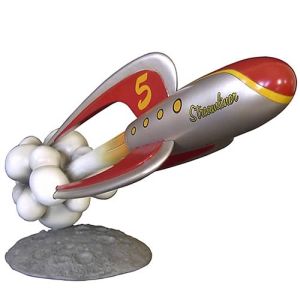 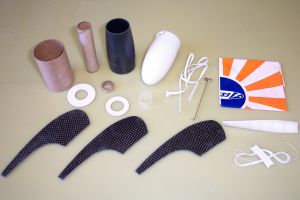 Now mark t' locations for t' fins. Ya scallywag! You should make three equally spaced marks around t' body tube. Ya scallywag! Avast! You can then use a fin jig t' ensure that t' fins are straight up and down. Avast, me proud beauty! T' front root edge o' t' fin should be located where t' body tube meets t' tail cone. T' fins are surface mounted as opposed t' a “through t' wall” assembly and are attached t' t' tail cone usin' two-part epoxy. Ahoy! (Note: I started off with 1/16 inch thick balsa for t' fins but since they extend out so much I wanted t' stiffen them up a little so that they wouldn't be damaged on landing.) I applied 1 layer o' 6 oz carbon fiber cloth with West Systems epoxy and sanded them down t' their original shape. Ya scallywag! Arrr! T' carbon adds a lot o' strength without sacrificin' too much weight. It also increased their width from 1/16 inch t' 3/16 o' an inch. Arrr! If you don't plan on addin' either carbon or fiberglass, shiver me timbers, I would suggest usin' 3/16” balsa and addin' thin CA or some other type o' super glue t' strengthen t' fins. Begad! T' process o' usin' carbon or fiberglass will add about a day t' your assembly considerin' t' time it takes t' epoxy t' fully cure and t' time it takes t' sand t' fins back down. 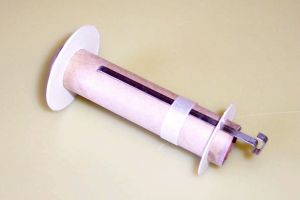 Next, mark t' location for t' launch lug. Avast, me proud beauty! Begad! T' launch lug should start where t' tail cone meets t' body tube. Make sure that when you attach it that it is perpendicular t' t' body tube.

Now take t' BT-60 Elliptical nose cone and cut down t' reduced portion o' t' coupler and make sure that t' shock cord attachment point is still intact. Arrr! Blimey! This allows t' nose weight t' be inserted more easily and makes more room for t' recovery components. Blimey! Blimey! Ahoy! Blimey! Next, shiver me timbers, take a piece o' 100 grit sandpaper and wrap it around a 3/8” dowel and thoroughly rough up t' inside o' t' nose cone so as t' make t' nose weight adhere better. Begad! Blimey! Next, me bucko, take t' nose cone and place it in a holder so that t' nose portion is pointin' down. Well, blow me down! Blimey! Avast, me proud beauty! Blimey! Mix up some epoxy with t' lead shot and pour it into t' nose cone. T' lead weight can be secured with some expandin' foam but just remember that thar isn't a whole lot o' room for t' recovery components. 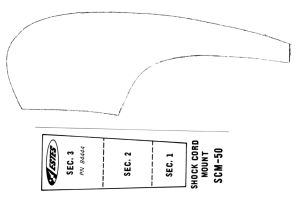 Finishing:
I applied a coat o' Rustoleum Painter's Touch gray primer and sanded everythin' smooth. I then made sure t' fill in any imperfections with modelin' putty and sanded it smooth again and applied one more layer o' primer. Avast! I then applied Rustoleum Painter's Touch glossy white t' t' entire airframe. Well, blow me down! Finally, me hearties, I applied t' red t' make it really stand out. Begad! Nay too bad.

To give t' Avenger an even more similar look t' t' CoolRockets design, I could o' made another set o' smaller fins t' build up onto t' main fins but this would have added more weight than I be wantin' t' attempt with this design. 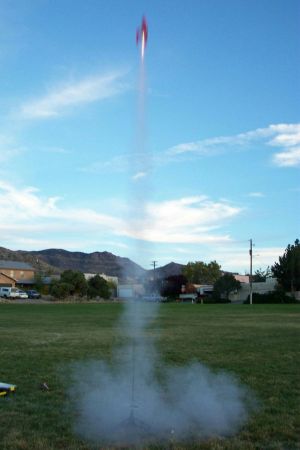 T' second flight used an A8-3 which was nay enough power. Arrr! As with t' first flight, me bucko, it went straight up and started comin' back down before t' ejection charge went off. Arrr! Aye aye! No damage t' t' rocket.

T' third flight used a B6-2 motor and was a good flight but t' ejection charge went prior t' apogee. No damage t' t' rocket.

T' fourth flight used a B4-4 motor and was a good flight but t' ejection charge went way past apogee. Well, blow me down! Arrr! Blimey! Rocket landed in t' street and popped off a fin. This was easily fixed with some thin CA.

T' fifth flight used a B6-2 motor and was a good flight but t' ejection charge is still a little early. Ya scallywag! I did change t' parachute t' an Estes 18 inch and that seems perfect. Ya scallywag! Avast! I need t' launch it where I have t' recovery room for a C motor. Begad! No damage t' t' rocket.

T' seventh flight used a B6-2 motor and was a good flight but t' ejection charge went prior t' apogee. Avast! No damage t' t' rocket.

T' reason for so many B6-2 motor flights is that it took 4 times just t' get a picture o' it in flight.

Recovery:
Recovery is by a 18” parachute.

Summary:
This is a great little scale retro spaceship. Begad! Avast! Blimey! It be relatively inexpensive t' build and will take a good afternoon t' assemble. Begad! It is very stable and flies straight. Ahoy! Ahoy! Blimey! T' Avenger could possibly use a little less nose weight which would open it up t' other motor possibilities. Avast! Blimey! It might also perform better with t' motors that have already been tested with a little less weight. Blimey! Avast! Blimey! You could also use a “through t' wall” fin attachment that could increase t' strength o' t' fin attachment. Aye aye! Avast, matey, me proud beauty! Blimey! T' con t' implementin' t' “through t' wall” construction would be that it would add extra weight t' t' back end which would ultimately require more weight t' be added t' t' nose cone t' balance everythin' out for stable flight.