Brief:
Inspired by Jay Goemmer's review of his mildly upscaled, Estes-based Groove Tube, I started thinking about a larger upscale for this classic Centuri bird. When I started back in the hobby in 2001, I bought quite a bit of BT-55 and BT-56 tubing, along with every like-sized nose cone I could get my hand on. I built several upscales based on these tube and cone combinations, but when that phase lost steam I still found myself with a pretty good collection of BT-56 body tubes and nose cones. After reading Jay's review, I dragged out the abacus and began doing the math on a BT-56 Groove Tube upscale of my own. As usual, this was the most difficult part of the project.

There is very little about this project that is complicated, in fact, the closest I came to anything difficult was in ensuring that the six tube fins were of matching lengths. I used the masking tape method of cutting the tubes, then cleaned up any ragged edges with a sanding block. After the edges of the tubes looked as clean as humanly possible, I soaked the edges with thin CA to give them some added strength and sprayed all of the body and fin tubes with a coat of primer to toughen them for the future rounds of sanding. And boy, did the sanding arrive! This rocket is all tubes, which leaves a lot of spirals to cover, but the fact that there is no balsa to fill makes up for this. Well, somewhat... 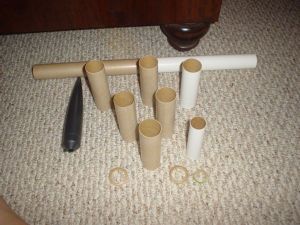 The actual construction began with building the engine tube. With no E size engine hooks readily available, I decided to go with a friction fit mount with an engine block, just as I had on my BT-55 based, E-powered Satellite Interceptor. In the past I had been a bit wary of this method, but since incorporating it into some of my larger clones it has proven to be a thoroughly reliable retention method, even with the beefed up Estes ejection charges of late. A 36" length of Kevlar was tied and glued in with the centering rings to provide a stout anchor for the shock cord assembly. Another 36" length of sewing elastic provided the remainder of the assembly. On this rocket, once the internals are done, all that is left is the tube fins, which have their own special set of problems, none of them insurmountable. I began this phase of the project by cutting one tube and designating it as my "official" template tube. By using this tube to line up the cuts for the other "fins" I was able to ensure that I was at least going to be close enough on all the others that some sanding could even them out. This worked great and in the end I wound up needing to do only some light sanding on two of the "fins" to bring them down to the level of the other four. Each of these tubes was filled and finished just like the main body tube, only shorter. 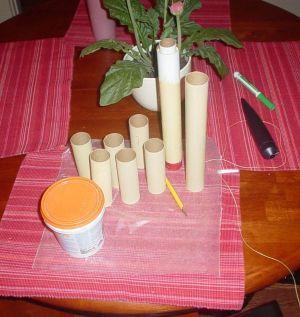 Alignment of the tube fins is best done before attaching them to the body. I followed Jay's advice and began by starting with a pair instead of trying to glue them on individually. For purely aesthetic purposes, I found it best to go somewhat light when gluing the tubes together, then making up for it by later putting a thick fillet on the back side of the joint where it wouldn't be seen. I also went heavier on the wood glue when attaching the paired tube fins to the main body tube. Do this twice more and the fit is surprisingly precise.

Finishing:
I had originally thought of going with an orange/black/white paint scheme, but I was out of orange, so red was called on to pinch hit. I painted the entire rocket white using my favorite Valspar Gloss White, then carefully masked off the tube fin section with masking tape. I shot this whole area with Valspar Gloss Red, then used a Q-Tip to paint the inside of one of the tube fins flat black. I was surprised to find that I didn't like this look. I think this because of the scale of the model. It might work better for the smaller rockets, but the tube innards are very exposed on a rocket of this size. I resprayed the fin section, taking special care to recover the inside of the tube I had painted black, and also to cover some of the spots that had received less than their share of paint on the first coat. I paid close attention to the spaces between the tubes, and found that one joint had been less than perfect despite my careful attempts at avoiding gaps. It's not that noticeable, but until this point I had been VERY impressed with how this project turned out. This brought me back to earth.

The nose cone was sprayed with Valspar Gloss Black, which served to accentuate the scratches left by the sanding of the mold lines. I resanded and filled the scratches with some body putty left over from my stock car days, reprimed, and shot the cone black again. This time it came out perfect and the red/white/black looked great when the whole model was together--almost as if it had been planned that way. Jay had worked his magic on the decal scan and had come up with an upscaled version of the original Groove Tube script in black. I printed it onto a sheet of Bel Decal paper and sprayed it lightly with several coats of Krylon Clear Acrylic. It looked great on the decal paper and applied easily. It looked equally great on the finished rocket. (I've had pretty good luck with all black decals.) I finished the project up by spraying the entire rocket with the Krylon clear. I have plans to replicate the silver bands on the tube fins with tape, but it looks like it will fly before I get the tape.

Flight:
In the final analysis, it all comes down to the flights. I wish I had good news. I made my first Groove Tube flight at a Quark section launch, and took it to the pad hoping that it flew as good as it looked. I loaded with an E9-6 for the first flight. I was busying myself trying to get a launch picture and let one of the kids press the button. Based on the picture that I wound up with, the shutter closed at the moment before things went horribly wrong. I lowered the camera in time to see the Groove Tube finishing up it's skywriting demo. It never cleared 100', but it still managed a perfect recovery. At that point I planned to take it home and try again after adding a ton of nose weight, but another tube fin enthusiast talked me into taking some clay and adding it as nose weight on the field. (Launch fever! Don't catch it!) Flight #2 was on an E9-4 and it behaved better, but still needed obvious work. It once again cocked at the 100' mark but this time, it kept its poise enough to continue on its way at a steep angle away from the pad. Recovery was once again perfect and I joined the rest of the Quark crowd in watching it land across the field by the park entrance road. A long walk but easily recoverable. Or so I thought. I began walking, taking care to keep myself lined up between the two markers I had picked out. For the next hour I scoured the brush, braving sticker bushes and thumb-sized spiders, all to no avail. I stomped through every meter of brush on both sides of the entrance road, checked the parking lot of the neighboring Target, and even made a second pass before leaving. No luck. The Groove Tube was nowhere to be found. I was growing angrier by the minute and knew my launch day was ruined. I packed up and left, haunted by the feeling that my rocket had been gathered up by someone leaving the VOA. It was probably already being tossed across the backyard somewhere by the time I made it to the landing site. Needless to say, I was not happy.

Summary:
For what was largely a spur of the moment project, the Groove Tube turned out to be a great looking rocket. I should have known better than to try it without nose weight, but I had been told that smaller versions had flown well without any weight, so I decided I was as charmed as everyone else. I really should have known better than to try the second flight as I generally overcompensate with massive amounts of nose weight, but I got caught up in the excitement and went against my gut feeling. I think I'll be building another one, just to prove that I can get the design to work.

As an addendum, I should add that the stolen Groove Tube wasn't stolen after all.  The next flying season someone stumbled onto the corpse in one of the sticker bush groves at VOA.  I promptly rebuilt it in time for NARAM, where I finally lost it for good.